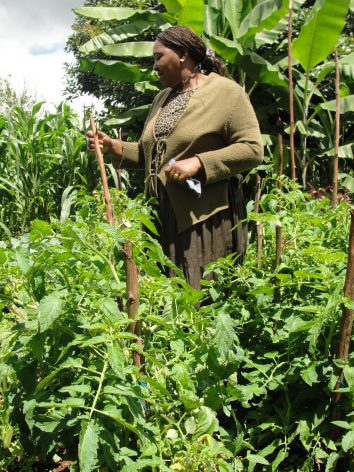 NAIROBI, May 19 2021 (IPS) - Peris Wanjiku, a smallholder farmer in Othaya, Nyeri County, which lies approximately 152 kilometres from Kenya’s capital, Nairobi, has watched as her fellow farmers have slowly started to sell off their land in the face of increasingly erratic weather patterns.

“For the right price, more and more farmers are willing to give up their farms. We have seen it happen in Kiambu County and it is slowly happening right here in Nyeri,” she told IPS.

The survival of Kenya’s smallholder farmers, who predominantly rely on rainfed agricultural systems, is at stake as agricultural experts warn that farmers are increasingly battling floods, droughts and heat stress at more frequent, intense and unpredictable rates. It has led to severe crop and livestock losses.

Wanjiku said that in a good year, a commercial crop farmer makes between $2,000 to $3,000 per acre from crops such as maize, wheat, tea and coffee. At the same time the price of land was quite high.

“An acre of farm land in Kiambu generally goes for a minimum of $100,000, depending on the area. If I hold on to my acre, how many years will it take me to make that kind of money? We are at a crossroads,” Wanjiku said.

At the same time the average price for an acre of land in Kiambu County is $323,000 — the third-highest land price across the county. According to the Hass Consult, a leading real estate company, the highest land prices are in Kenya’s capital, Nairobi, followed by the coastal county of Mombasa.

It is within this context that the Alliance of Bioversity International and the International Center for Tropical Agriculture (CIAT) has developed 45 Climate Risk Profiles for all agricultural counties in Kenya, with the exception of urban Counties of Nairobi and Mombasa.

A value chain in agriculture is a set of actors and activities involved  right from the production level to consumption.

“Further, these profiles provide an assessment of the programmatic interventions and the level of institutional capacity needed to help farmers and pastoralists cope with climate related risks and vulnerabilities,” she said.

Mwongera explained that these profiles were developed in an effort to guide and prioritise climate-smart agricultural investments at county level. This is critical since Kenya has a devolved system of governance where power and resources are shared between the national government and all 47 county governments.

“In every county, key value chain commodities were identified and the most problematic climatic hazards outlined. They therefore detail the vulnerabilities and risks posed by climate risks to people, their livelihoods, investments and the environment,” Mwongera said.

The report then listed adaptation strategies that farmers were using to cope with the changing climate and listed additional on-farm and off-farm adaptation practices. Off-farm activities refers to farming activities undertaken outside of a farm setting such as marketing of produce etc.

Overall, all 45 profiles provide an overview of climate risk issues and, historical and future climate trends in this East African nation.

Kenya’s Food Security report released in January predicted a 30 percent decrease in harvest due to below-average rainfall experienced from October to December 2020.

A similar report released in March forecast below-average long rains from March through May this year and a subsequent low harvest.

Against this backdrop, climate risk profiles give a synthesis of the policy, institutional and governance frameworks that can create an enabling environment for farmers to overcome climate related risks.

Mwongera also said that the latest batch of profiles made reference to the need for a women-responsive climate risk management plan.

For the right price more and more farmers are willing to sell their farms. Credit: Joyce Chimbi/IPS

Judy Matu, the chair of the Association of Women in Agriculture Kenya, explained to IPS: “Women play a very central role in agriculture. Building climate-resilient agricultural systems requires that women are involved, that they actively participate and are champions of climate smart agriculture.”

World Bank estimates show that women run at least three-quarters of Kenya’s farms. Meanwhile, women were allocated only 1.6 percent of approximately 10 million hectares of land that was registered between 2013 and 2017, according to the Kenya Land Alliance.

Matu said that at the same time, not only do women farm on land that they do not own, all commercial crops and bigger livestock belong to men.

“Women run farms on a day-to-day basis and they need knowledge on proper farming practices such as agroforestry, organic and conservation farming. But trees also belong to men who decide whether a tree can be planted or cut,” Matu said.

Matu said that initiatives are underway to overcome these challenges, including engaging both men and women in sensitisation sessions on the need to adapt more climate-resilient farming practices. This, she said, creates an enabling environment for women to put acquired knowledge into practice.

Meanwhile, farmers like Wanjiku continue to battle climate-related risks at a more frequent and intense rate. But Wanjiku said that if she could find solutions to overcome these challenges, she would not sell her land.