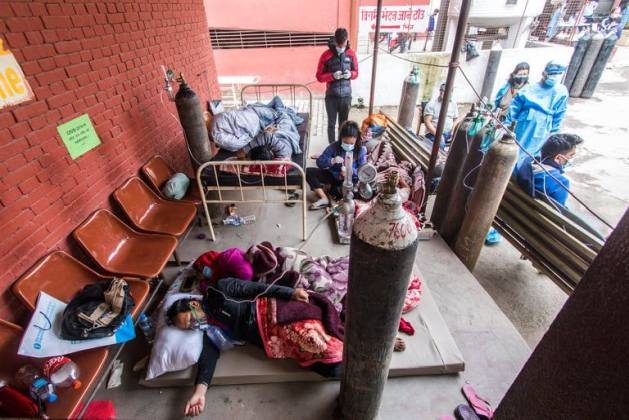 Kathmandu’s main infectious diseases hospital in Teku is full, and patients are being cared for in open verandahs and parking lots – a scene repeated in government hospitals across the country. Credit: Nepali Times.

KATHMANDU, May 20 2021 (IPS) - If you live in Nepal, a quick survey of friends and family will quickly prove how rapidly Covid-19 infection rates have spiked. For instance, out of 50 people we called last week, more than half had been infected, with the rest reporting that their extended families or colleagues had tested positive.

Recently, the sister-in-law of one of the authors- just 58 years old- died from the virus. She would have survived COVID-19 but despite a frantic rush around the city, we could not find an ICU bed in any of the hospitals in Kathmandu.

These are the kinds of stories that are now dominating headlines- as our health system buckles under pressure. People are dying while waiting in line not just for treatment, but for COVID-19 tests.

Beyond vaccines, the cure for COVID-19 is citizen engagement. It is too easy- and also simply too slow during an emergency- to simply finger point at national political leaders, as culpable as they are

India has dominated the COVID-19 headlines recently, but Nepal is now the global epicenter of the pandemic. The virus is spreading uncontrollably– on a per capita basis we now have 211 infections per 100,000 people, compared to India’s 130 per 100,000. And once again it is becoming clear that both the causes and symptoms of this disaster are not related to healthcare, but are at their core, issues of corruption and lack of accountability.

While countries like New Zealand and South Korea are clear examples of how coherent leadership, transparency, creative public-private partnerships and ongoing citizen engagement can ensure effective COVID-19 responses, Nepal is the complete opposite.

Petty political infighting, opacity in decision-making, nepotistic contracting and complete disregard for citizens’ concerns have characterized the response. Just last week it became clear that a private company called Hukam Distribution and Logistics refused to deliver vaccines from India because they were not paid a 10% kick-back- venality of the highest order which will lead to hundreds of unnecessary deaths.

Our healthcare system has been undermined by corruption and a lack of integrity for as long as anyone can remember- we have never been prepared for a crisis of this kind. Healthcare has become a commodity only for those who can afford it.

It takes hunger strikes by well-known doctors to catalyze even the beginnings of any discussion about reforms. As a result, in early 2020 when COVID-19 emerged in Nepal, we had some of the worst public health outcomes in the world. You might think that our experience with the dual, devastating earthquakes of 2015 would have built some degree of crisis preparation and management capacity within government, but we are now making all the same mistakes as six years ago.

Beyond vaccines, the cure for COVID-19 is citizen engagement. It is too easy- and also simply too slow during an emergency- to simply finger point at national political leaders, as culpable as they are. Citizen engagement now means three things.

First, it entails an understanding that change needs to begin with all of us. We ourselves need to find ways to collectively organize together to hold the government accountable. There are emerging efforts to do this such as the “Enough is Enough” campaign which forced the government to disclose COVID-19 spending and expand testing facilities.

Other organizations such as Shaasan are finding ways to crowdsource citizen concerns and score the performances of public officials; and our own efforts through our Coronavirus Civic Action Campaign are countering misinformation and ensuring citizen voices are heard as part of decision-making at the local level around the pandemic. These ground-up initiatives can make a difference when citizens get involved on a large-scale.

Second, open data is key to ensure transparency and accountability of the response. Transparency is the bedrock of democracy and accountability and information in Nepal is scattered, incomplete and inconsistent. Organizations run by citizens like Open Data Nepal and Open Knowledge Nepal have tried to open-up government, and the health Ministry’s COVID-19 dashboard provides some information, but it is not updated in real-time and is not in a format that makes it easy to synthesize.

And in any case only just over a 1/3 of our population has access to the internet. We need to find new ways to engage citizens around information about the response and how they can get involved. In Nepalgunj, a city in western Nepal, the government uses digital billboards to disseminate information to the public that citizens are now using to monitor decision-making.

This leads us to the last point, which is that we as citizens need to support and amplify the work of local political leaders who are doing the right thing during the pandemic and demonstrating that citizens come first.

In Dhangadhi municipality in Western Nepal for instance, the local government set up women only quarantine centers during the first wave of COVID-19 after a 31-year old woman was gang-raped while in a shared quarantine space, which should become a model for other towns. In Karnali province recently, the local parliament worked with us to collect data from returnee migrants and is now working to prioritize their concerns.

And in Panauti municipality, local officials are creating a databank of citizen needs so they can decide government plans and programs accordingly. Nepal recently moved towards a federal structure through which more power was devolved to the sub-national level- and we have to use this to engage citizens where government is closest to them; and to maneuver around the central government where that is necessary.

There is a famous quote that “people get the government they deserve”. The implication is that citizens have the power to improve government themselves. As Nepal finds itself the world’s next COVID-19 hotspot, there has never been a better time for citizens to do so.