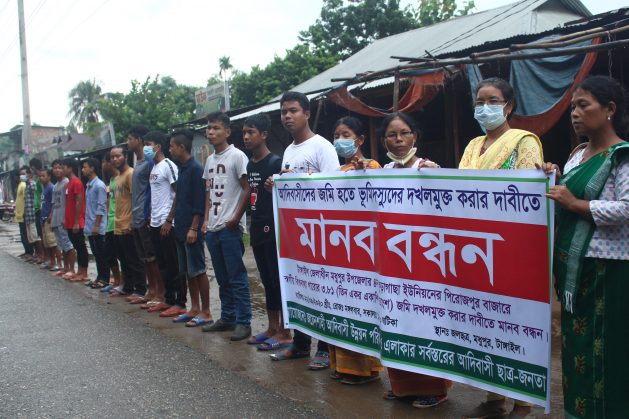 Rema, from Pegmari village in Madhupur, Tangail district, had cultivated the banana plants on half an acre in the Madhupur Forest. But the Forest Department claimed that the land on which the bananas were cultivated belonged to the department.

Rema’s story is not an unusual one as in the past the Garo and other indigenous minorities have been evicted from their ancestral land because of a lack of land rights.

“Land dispute is the main problem as the government declared 9,145 acres of land of Madhupur Forest as ‘absolute reserved forest’, putting our living in our ancestral land at risk,” Jonajetra, a member of the Garo community living inside the forest, told IPS.

He said the Forest Department often filed false cases against the indigenous people for allegedly felling trees. Even children as young as seven and eight years old were being sued.

In a gazette notification from Feb.15, 2016, the Ministry of Environment and Forests declared the land of Madhupur Forest as a forest reserve under Section 20 of the Forest Act-1927.

“If we want to build a new house and dismantle our old one, the department obstructs our works. If we want to plant banana or pineapple orchards on our fallow land, we get objections from the Forest Department,” Nokrek said.

Despite living in the Madhupur Forest for generations, the indigenous Garo and other minorities have no right to the forest land. And drives by the Forest Department to recover land that has been lost to agriculture and land grabbing, has instilled a fear among indigenous community of losing their ancestral land.

“We are on the verge of eviction from our ancestral land as the government has declared the Madhupur Forest as an ‘absolute reserved one’. We can be evicted from the forest anytime,” said Nokrek, who is also a member of the indigenous Garo minority.

Decades ago, Madhupur Garh, in Tangail district, used to have 122,876 acres of traditional shal forest. It was broken down as follows:

According to officials at the Tangail Forest Department, about 80,000 acres of the forest have already disappeared because of indiscriminate tree felling and forest grabbing. The process of land grabbing continues, officials said.

Tangail Divisional Forest Officer Dr. Mohammad Jahirul Haque said the department would continue its drives to recover forest land from grabbers. However, he assured IPS that there was no plan to evict the indigenous people from the forest and they would remain on their ancestral land.

According to Sanjeeb Drong, General Secretary of the Bangladesh Indigenous Peoples’ Forum, legally the Madhupur Forest is under the jurisdiction of the Forest Department but the indigenous people claim it as their ancestral land and had evidence to this effect.

Drong said the Madhupur Forest was home to the Garo, Barman and Koch ethnic minorities and they had been living there for generations.

While the country’s current government is considered friendly to the rights of the indigenous population — the 2008 election manifesto of ruling Awami League announced that once elected it would form an independent commission to resolve the land disputes of indigenous minorities — a fear of the actions of past governments still haunt the indigenous community here.

Nokrek said many indigenous families were evicted from the Madhupur Forest during the 2007 to 2008 period when a caretaker government was in office. Nokrek was concerned if there was a change in power, a new, controversial government could evict them.

“We are the forest dwellers and we demand legal rights to our land where we have been living for generations. We want legal recognition of our ancestral land so that nobody can evict us,” Nokrek said.

“If we have legal recognition, we will get compensation once the government want to acquire our ancestral land for greater interest,” he added.

Land owners are compensated when their land is acquired for government projects. But, the Garo and other indigenous minorities cannot receive compensation as they have no legal proof of ownership of the land.

“The long-dispute over the land right of ethnic minorities is yet to be resolved… the government has not formed the commission yet. The policymakers should take decisions on how to give the ethnic people’s rights to their ancestral land,” Drong said.

In 1956, the then Pakistan government declared the forest a national park and evicted indigenous people to acquire the forest land. And, upon Bangladesh’s independence in 1971, the Madhupur Forest was declared a national forest or reserved forest.

“Although Garo people had long been living in the forest, the land lords did not give land rights to them after the East Bengal State Acquisition and Tenancy Act was passed in 1950. That is why they lost their rights to their ancestral land,” Drong told IPS.

“The majority portion of the Madhupur Forest has already been grabbed by influential people and local encroachers,” Drong pointed out.

Noting that due to the pressure of an increasing population, the forest area was dwindling day by day, the indigenous leader said in recent years, factories and industries were established on forest land through the falsification of documents.

Divisional Forest Officer Haque said there was a total of 122,000 acres of traditional shal forest in Madhupur Garh, of which a vast area was occupied by local grabbers and influential people.

The Forest Department has so far recovered about 19,000 acres of grabbed forest land, he said.

As the forest is shrinking fast in Madhupur Garh, the forest official said, the government has taken a bigger initiative to restore the traditional shal forest and the fallow forest land will be brought under green coverage with the planting of new shal saplings.