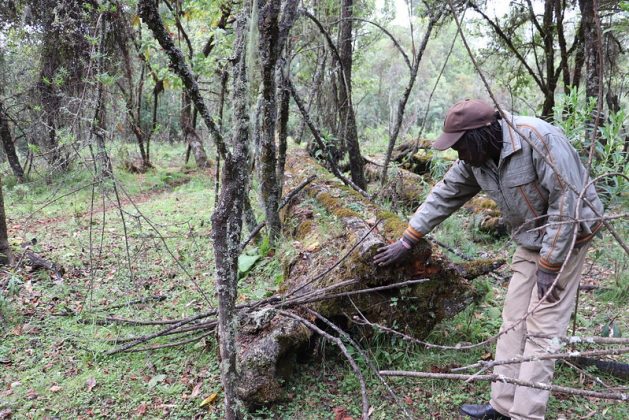 CHEPKITALE, Kenya , Jul 21 2020 (IPS) - The Ogiek community, indigenous peoples from Kenya’s Chepkitale National Reserve, are in the process of implementing a modern tool to inform and guide the conservation and management of the natural forest. The community has inhabited this area for many generations, long before Kenya was a republic. Through this process, they hope to get the government to formally recognise their customary tenure in line with the Community Land Act.

In collaboration with the International Union for Conservation of Nature (IUCN), community elders, civil society members and representatives from the 32 clans that form the Chepkitale Ogiek community are mapping their ancestral territory using a methodology known as Participatory 3-Dimensional Modelling (P3DM).

“The mapping will support the spatial planning and management of the Chepkitale National Reserve by identifying actions required to address the various challenges affecting the management and conservation of the natural resources in the targeted area,” John Owino, Programme Officer for the Water and Wetlands Programme at IUCN, told IPS.

The process, which started in 2018, involves extensive dialogue with community members in order to document their history, indigenous knowledge of forest conservation and protection of natural resources using their traditional laws and geographical territories.

According to IUCN, which is providing both technical and financial support, the exercise was projected to be completed by the end of 2020. However, this target will be delayed as a result of the prevailing coronavirus pandemic.

Some of the Ogiek’s unique traditional community laws recorded in the participatory mapping exercise state that charcoal burning is totally prohibited, poaching is strictly forbidden and commercial farming is considered illicit.

“In this community, we relate with trees and nature the same way we relate with humans. Felling a mature tree in our culture is synonymous to killing a parental figure,” Cosmas Chemwotei Murunga, a 72-year-old community elder, told IPS. “Why should you cut down a tree when you can harvest its branches and use them for whatever purpose?” he posed.

Very famously, in 1976, the Ogiek community protests put an end to government-approved logging of the indigenous red cedar trees here.

The trees, felled some 44 years ago, still lie perfectly untouched on the ground in Loboot village. 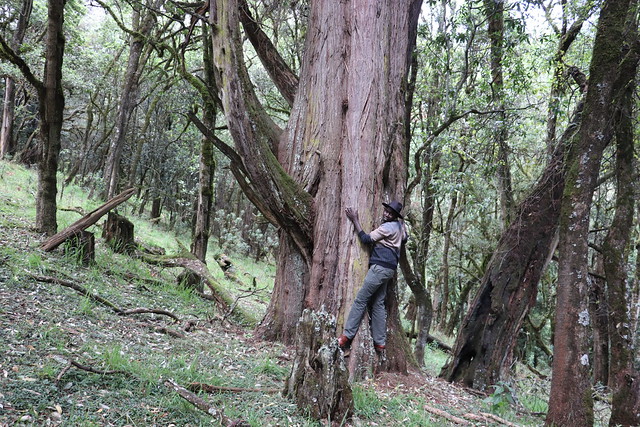 While the Ogiek are an asset to the conservation of the forested area within the park, their dispute with the government over their rights to the forested land has been a long-running one.

“In many indigenous communities, governments have always used an excuse of environmental destruction to evict residents, and that was the same thing they said about our community,” Peter Kitelo, co-founder of the CIPDP, told IPS.

“However, we have proved them wrong, and when the case is finally determined, we are very hopeful that we will emerge victorious,” he said.

The 3D mapping, according to Owino, is in line with the Whakatane Mechanism, an IUCN initiative that supports the implementation of “the new paradigm” of conservation. It focuses on situations where indigenous peoples and/or local communities are directly associated with protected areas and are involved in its development and conservation as a result of their land and resource rights, including tenure, access and use.

There are previous examples of P3DM mapping proving successful among another Ogiek communities — those in the Mau Forest.

The CTA further reported that a rich P3DM portfolio of outputs, including reports, papers and maps, have been used at international forums to document the value of local/indigenous knowledge in sustainable natural resource management, conflict management and climate change adaptation, and in bridging the gap between scientific and traditional knowledge systems.

In addition to the 3D map, the Ogiek community is already working with the National Land Commission of Kenya, an independent body with several mandates. Among them is the mandate to initiate investigations, on its own initiative or based on a complaint, into present or historical land injustices and to recommend appropriate redress.

“Once completed, the 3D map will be a very important tool for this community because apart from effective management of the natural resources in Chepkitale, we will use it as an instrument to prove how we have sustainably coexisted with nature for generations,” said Kitelo.

According to elderly members of the Ogiek community, the forest is their main source of livelihood.

Inside the forest, the community keeps bees for honey production, which is a major part of their diet apart from milk, blood and meat. They also gather herbs from the indigenous trees, shrubs and forest vegetation, and feed on some species found in the forest. Their diet is not limited to bamboo shoots, wild mushrooms and wild vegetables such as stinging nettle.

“Since I was born 72 years ago, this forest has always been the main source of our livelihoods,” Chemwotei Muranga told IPS.

Now, armed with traditional knowledge of forest management and conservation of natural resources, community-based rules and regulations, and provisions within the country’s new constitution and the Community Land Act— they hope to be doing so for centuries to come.

“Living in such a place is the only lifestyle I understand,” Chemwotei Muranga said.

The inclusive approach of supporting indigenous peoples and local communities in conservation will be a major focus at the IUCN World Conservation Congress in Marseille, France, next January. The topic falls under one of the main themes of the Congress, “Upholding rights, ensuring effective and equitable governance” with sessions aiming to discuss and provide recommendations for how the conservation community can support the existing stewardship of indigenous peoples and local communities.