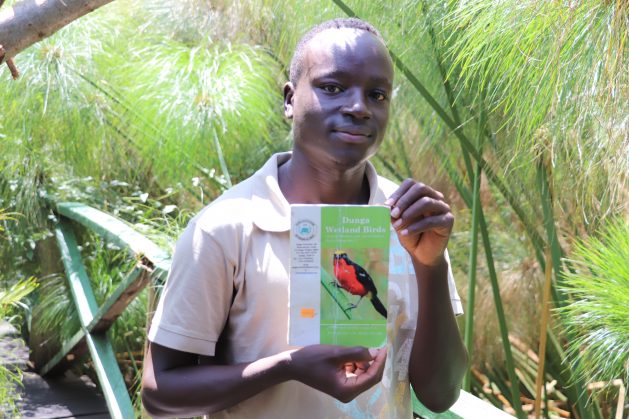 KISUMU, Kenya, Apr 6 2020 (IPS) - At around 11am on a Saturday, Luke Okomo arrives at Dunga Beach, on the outskirts of Kenya’s Kisumu City, and heads straight to what is known as the ‘Dunga Papyrus Boardwalk’.

He pays Sh200 ($2), the daily fee for local tourists and students, and then joins a group of five visitors already taking a tour of the boardwalk, which is elevated above a wetland swamp and surrounded by  papyrus reeds. He then takes a seat in an open café and orders a drink as he enjoys the view of Africa’s biggest fresh water body.

It’s a good spot for some bird watching.

It’s hard to imagine that just a few years ago, Dunga Beach, which is one of the most popular fish landing sites in Kisumu, used to be filthy and a source of pollution that spilled into Lake Victoria.

But two years ago the Dunga Eco Tourism and Environmental Youth Group, with financial support from the French Embassy in Kenya, came up with the idea to turn the marshland here, which extends into the Winam Gulf of Lake Victoria, into a tourist site.

“Our main aim was to generate extra income for the youth, apart from what we get from the fishing business, while at the same time conserving the aquatic environment,” Samuel Owino, the coordinator of the Dunga Eco Tourism and Environmental Youth Group, tells IPS.

Edgar Ochieng, a 28-year-old boardwalk tour guide, tells IPS that along the small museum onsite, the boardwalk has become a perfect tourism site for local and foreign visitors.

“Local visitors, most of them students from different parts of the country, come over the weekends during the day to learn from our small museum, which displays the traditional wares and crafts such as musical instruments, various functional artefacts, ornaments, costumes, all made by the local residents, most of them women groups,” Ochieng says. 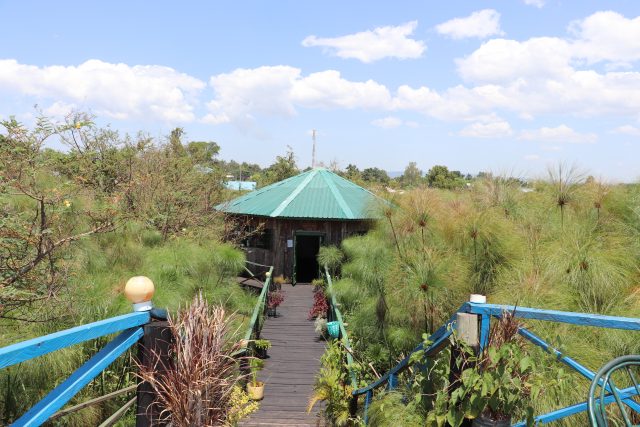 The Dunga Beach Museum, which displays the traditional wares and crafts such as musical instruments, various functional artefacts, ornaments, costumes, all made by the local residents, is located on top of the boardwalk. Credit: Isaiah Esipisu/IPS

Owino points out though that many foreign visitors prefer visiting very early in the morning in the hope of catching site of the rare and threatened bird species that make their home here.

According to Birdlife International, the Winam Gulf is one of the most reliable sites in Kenya for viewing  the scarce and threatened bird species — the Papyrus yellow warbler (Chloropeta gracilirostris) — which is often seen along the lakeward side of the swamp.

Ochieng notes that the Dunga Eco Tourism and Environmental Youth Group has have identified 46 different bird species, which they have documented in a handbook called ‘Dunga Wetland Birds’.

There are also many snakes here too.

“During the early hours, there is an opportunity to see different types of snakes, but most importantly, many visitors are interested in seeing a huge python that lives in this swamp and the sitatunga antelopes,” says Owino.

Though the guides are quick to point out that the boardwalk, which extends about 50 metres, has been coated with waterproof material that also prevents reptiles from climbing it.

“This kind of innovation is a good thing for the lake ecosystem,” says Ken Jumba, a county environment officer at the National Environment Management Authority (NEMA) in Kisumu.

“We encourage entrepreneurs from all other communities around the entire lake to learn from what is happening here in Dunga,”Jumba tells IPS.

The construction of the boardwalk in 2016 also resulted in establishing a protected area around the wetland.

“When our proposal was approved for funding, we involved the county government who helped relocating the traders from the wetland, some of whom had erected pit latrines above the water so that the sludge drops directly in the lake,” recalls Owino.

Now small businesses, including food places run by local entrepreneurs, have moved away to the upper side of the beach, which has led to improvement of the lake’s biodiversity. 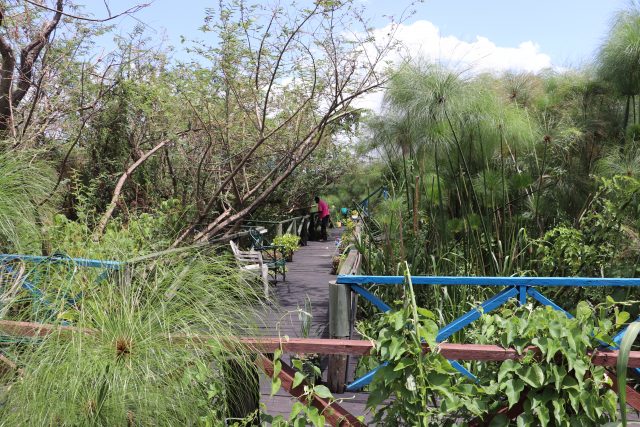 About 100 metres away, there is a huge biogas plant that has been welcomed. The plant, which produces some 50,000 litres of ethanol gas daily, makes use of the invasive water hyacinth that grows wildly on the lake as a key ingredient.

“We usually shred the water hyacinth, which is considered to be pollution on the lake, and then mix it with all the inedible waste material from the fish to generate the gas,” Daniel Owino, the technical operator of the biogas plant, tells IPS.

Meanwhile, industrial activities around Kisumu and other towns in neighbouring Uganda and Tanzania–Lake Victoria also extends to these countries–have turned the lake into a health hazard.

It will take much more commitment and cooperation to ensure that the lake is saved. Though the creation of the Dunga Papyrus Boardwalk and the cleaning up of Dunga Beach can be considered a good start.