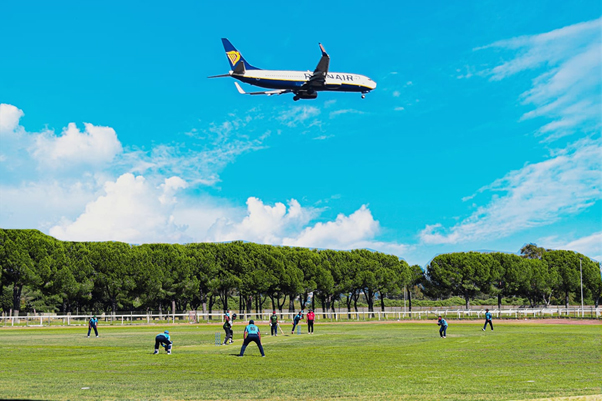 ROME, Jul 21 2021 - Following Prime Minister Imran Khan’s comments about the need to promote ‘Pakistaniyat,’ a debate has been underway on what constitutes this ideology and what unites Pakistanis around the world. While this may be a contentious and polarising debate, one thing is for certain: the game of cricket is something which brings us all together.

Cricket is everywhere – it is present in speeches in the parliament, television shows, family discussions over dinner, and has quickly surpassed other historically important sports in Pakistan, namely field hockey and squash.

Amazingly, cricket is also a conduit for overseas Pakistanis to maintain a cultural and nostalgic link with the home land. Here in Italy, where the Pakistani community numbers close to 150,000 making it the second largest in Europe after the UK, Pakistanis are playing an important in keeping the spirit and passion of cricket alive in a nation where football rules supreme. In Northern Italy, in places like Emilia Romagna, Lombardia, Trentino-Alto Adige and Veneto, club teams feature a significantly large contingent of Pakistani players.

That said, cricket is still in its nascent stages in the country. Although there is a vibrant league which operates under the auspices of the Federazione Cricket Italiana, much remains to be done. For example, it’s important that more games are organized in a calendar year to enable current players to gain greater match practice. There is also a need to make inroads in the Italian school system to encourage young Italians to pick up the cricket bat and ball. Lastly, more sponsors need to come forward to ensure that cricket survives in the country.

At the start of the 2021 cricket season, we meet two young Pakistani cricketers, Emi Ghulam, 26 year old, and Zaryan Ijaz, 17 years old, in Rome to gain an understanding of how cricket plays a role in their identities. Both are all-rounders and are a regular feature in the Roma Capannelle Cricket Club’s (RCCC) 1st XI. Being 10 years apart, their varied outlooks on the game, life in Italy and what means to be a Pakistani in the country makes for a fascinating read.

Tell us about yourself and what got you into cricket?

Emi: ‘I was born in Italy to Pakistani immigrants from androon Lahore. My father used to play cricket in Rome. He was an outstanding wicketkeeper and was praised for his can-do attitude behind the stumps. I was inspired by his approach and passion towards the game and that got me into cricket’.

Zaryan: ‘I was born in Pakistan but have been in Italy for almost 11 years. We are originally from Mandi Bahauddin and we visit Pakistan frequently. My father still plays for the Roma Capannelle Cricket Club and his influence as well as regular trips to Pakistan have been the reason for playing cricket.’

How did you learn the game?

Emi: ‘There was no one to teach me the game, which was frustrating. When I starting playing, I was mocked by other people for the way I played. This riled me up further and pushed me to learn the game independently. I would credit YouTube for teaching me most of what I know. I also have family in Pakistan and England, and during visits to these places, I have had the opportunity to observe the game closely at a higher level. Here I must also mention the valuable contributions made by our club President, Francis Alphonsus Jayarajah, and captain, Leandro Mati Jayarajah, in encouraging me to take up the game seriously and for entrusting me with important responsibilities within the club.”

Zaryan: “Cricket runs in my family! My father still plays the game and my uncle also used to play.” 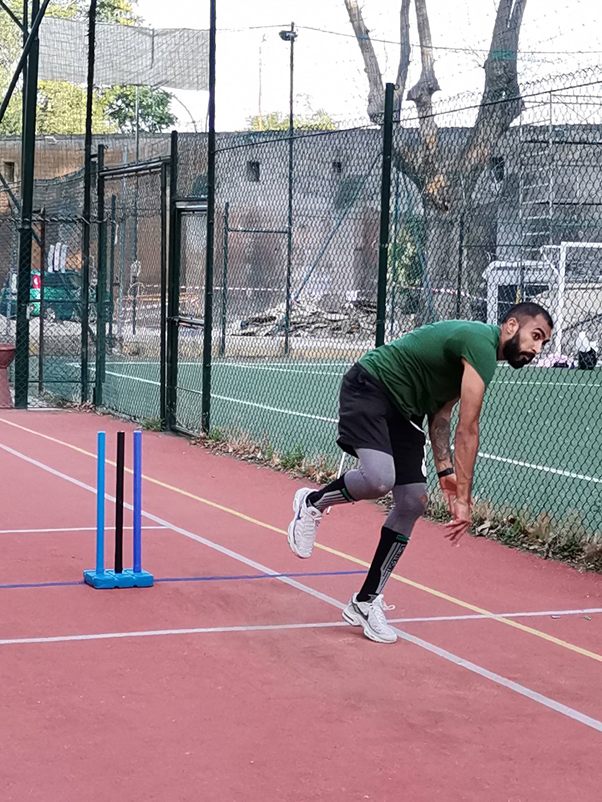 Who are your influencers in the cricketing world?

Emi: “As a child, my father advised me to identify a cricketer to emulate. While watching TV, I used to like Sachin Tendulkar in the olden days and copy his batting style. Now, the newer exponents of modern batting, Virat Kohli and Babar Azam, are my inspiration. As for bowling, I used to admire Mohammad Aamir for his ability to swing the ball but over time I have found Wasim Akram and Jimmy Anderson to be more effective bowlers to follow.”

Zaryan: “I would have to say my father. He played cricket at a very high level in Mandi Bahauddin and I have always been insipired by his cricketing journey.”

How do you see the perception of Pakistanis in Italy?

Emi: “It’s neither positive nor negative – somewhere in the middle, I would argue. We pop up in the news when there are sad incidents of families choosing to kill their daughters, and that is not a good projection of us as people as there are many of us who are exemplary citizens and are in engaged in respectable professions. I do think that there is still respect for those Pakistanis who do good deeds.”

Zaryan: “My experiences have been positive with Italians and I have only positive things to recall. Plus, I do not think that this treatment is restricted to a big city like Rome, Pakistanis all over the country are regarded and treated well.”

Can cricket promote better integration in the Italian society?

Emi: “Indeed, cricket can be helpful. When Pakistanis play people take notice of them and their mannerisms. They get to interact with numerous Italians, get to travel to various cities to play tournaments, learn the language; as well as and quite importantly, cricket clubs help players get jobs and settle into the Italian way of life. But I do think that any Pakistani who plays the game should play with respect and dignity. Often Pakistanis get into fights on the ground which is not a positive sight. I am all for players earning and giving respect on the ground. That is what it is all about!”

Zaryan: ‘Yes, in principle but the real problem is that very few Italians play cricket. Playing the game therefore can help one to integrate with other migrants, such and Bangladeshis, Sri Lankas, etc., but not with native Italians. In order to get acquainted with the latter, sports such as volleyball, basketball and football, need to be pursued.” 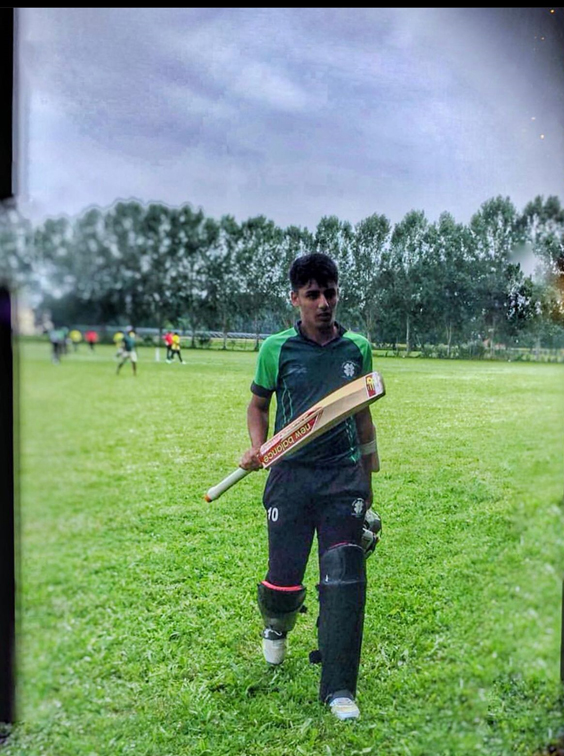 How do you see the role of the Pakistani community (embassy, cultural centres, organizations, ordinary people, etc.) in promoting cricket in Italy?

Emi: “Various things. They can help us in bringing good players into the fold. With good cricketers, the standard in Italy is bound to improve. I also think that should players like me, and others of Pakistani origin in Italy, get a chance to ply their trade in cricket leagues, such as the Pakistan Super League (PSL), it will have positive impacts all around.”

Zaryan: “There is definitely a role that the community can play. Particularly, I think they can help with the publicity of the game. For example, in and around their businesses they can put posters to show support and promote one of the many clubs that play the game.”

What are your most prized accomplishments related to cricket?

Emi: “Once I came in at number seven with wickets tumbling all around. On that day nobody expected me to do anything with the bat but I surprised them all with a quick knock of 40-odd runs. I smashed nearly every bowler receiving accolades from teammates in the process. That one game gave me a lot confidence and put me on an upward trajectory”.

Zaryan: “I have captained the under-13 and under-15 teams for my club. In this role, I helped the team win five games in row which we played all over Italy, in Bologna, Rome, Napoli, etc. I always relish that memory.”

What are your future ambitions related to cricket in Italy?

Emi: “I would like the world to see my family in a good light. I would want people to acknowledge that a quality player has come out of our family. As well, I am motivated to play for the Italian national team.”

Zaryan: ”I need to work on my physique. I feel that if I can surmount this challenge I have it in me to make it to the PSL. I would like to try out for one of the teams there. Plus, I would like to play for the Italian national team.” 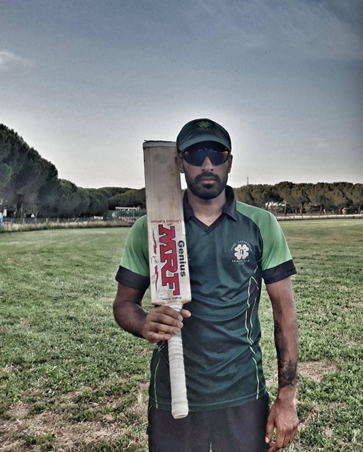 Emi Ghulam pictured at the RCCC Ground after scoring a half century and taking three wickets. Photo courtesy: Emi Ghulam

What is the one thing that you dearly miss about Pakistan?

Emi: “FUN. The place is abuzz with energy. I miss walking around in the streets till late at night, seeing how people go about their life, and to enjoy good food.”

Zaryan: “FOOD. I am a fan of seekh kabab and biryani, and miss eating these dished when I am there.” 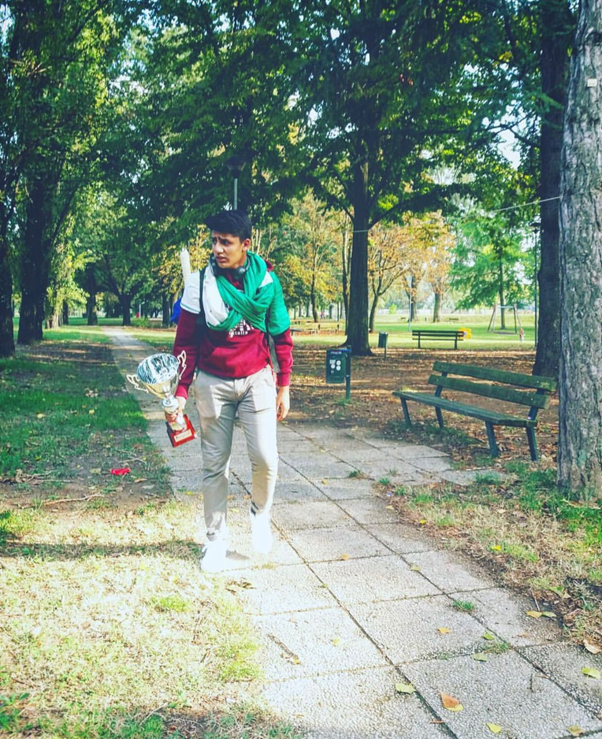 The writers are Pakistanis who work and live in Rome. This is fourth in the series of articles on Pakistanis in Italy, and the first one which looks at how sports can be a strong means for integration in the Italian society.