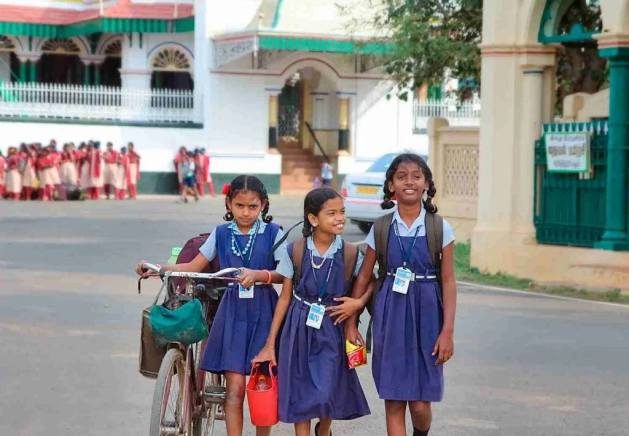 Schools in India are not just a source of education but also provide access to health, hygiene, immunisation, and nutritional safety nets. | Picture courtesy: Flickr

Jul 22 2021 (IPS) - “The government should open schools, even if it’s for an hour, to facilitate some student-teacher interaction. Most teachers feel that students should be encouraged to come to school.

Neither parents, students, nor teachers are worried about transmission as little has changed in the community habits such as social gatherings, shared resources, intermingling of children, and drinking, among others.

Only schools have closed. What a child can learn by coming to school for two hours a week will be much more than what they learn from online videos, six days a week,” says Deepa Khare*, a pre-primary teacher from a government school in Bhopal, Madhya Pradesh.

With schools shut, she adds, “We call students from our own numbers and sometimes we receive calls back at odd hours. On top of that, we are expected to distribute ration, uniforms, and teaching assignments in communities. We are doing everything, except teaching.”

Schools in India are not just a source of education but also provide access to health, hygiene, immunisation, and nutritional safety nets. India’s Mid Day Meal Scheme (MDM), one of the largest school feeding programmes in the world, has been widely studied for its positive associations with an increase in attendance, decreased rates of malnutrition, and prevention of stunted growth across generations

With COVID-19 restrictions being lifted across the country, it is promising to see the centre and states focus on the way forward for reopening schools. Many states are planning to reopen schools for Grades 8-12 after a 15-month lockdown—which affected more than 260 million students in India.

While it is important to resume classes for secondary and senior secondary graders, we cannot overlook primary school students, who are at a higher risk of impaired socio-emotional learning and nutritional loss due to school closures.

There is plenty of evidence on how prolonged school closures can result in learning loss, impact mental health, and increase the risk of child labour, early marriage, and nutritional loss for children.

The learning loss has been widely discussed and acknowledged. However, primary school students are likely to face larger risks, such as lack of socio-emotional development and nutritional loss, if schools continue to remain shut.

Missing out on socio-emotional development

“My daughter, who is in Grade 2 now, has never met any of her classmates physically since she joined school in April 2020. She has online classes for three hours every day, where she can’t really interact with any of her other classmates.

And so, some of us (parents) have created a WhatsApp group to set up a 30-minute Zoom session for them to interact every evening,” says Asif Hassan* about his elder child, who is seven years old.

His younger child, who is three years old, has formally ‘joined’ pre-school this year. Arif is anxious about how the lack of interaction will impact the socio-emotional learning of his children, given that early childhood learning is critical for overall development. He says, “If the school vaccinates all the teachers and staff, I would be open to sending my children to school.”

What is a child’s first memory of school? More often than not, it is about peers and teachers, who constitute our definition of school—even before academic learning kicks in. Can you imagine school life without reminiscing about your peers and teachers?

These early memories of school play an important role in shaping our socio-emotional learning, which is a process for young children and adults to develop their emotions and identities. And schools are one of the first ecosystems to provide community and authentic relationships with peers and teachers This has a direct bearing on the stress and anxiety levels of children.

Globally, public health experts have stressed that lockdowns have put one in seven students at risk of poor mental health. With primary caregivers of children—both parents and teachers—currently juggling health and economic shocks, children’s needs are being put on the backburner.

Preliminary findings from a survey by ChildFund India across 10 states showed that 78 percent of children were feeling sad and eight percent were feeling anxious because they were not able to meet friends and teachers, access or/and understand online learning sessions, and because they were missing active face-to-face learning.

India’s National Education Policy 2020 also stressed the importance of socio-emotional learning for the holistic development of children. The closure of institutions during the pandemic has resulted in learning gaps, no in-person interactions, and loss of routines for children, which leaves them vulnerable to poor mental health.

Risking children’s health due to a lack of nutrition

“I was stuck in Bihar due to a lockdown for six months during COVID-19. When I came back to Delhi and went to take ration as a part of the midday meal for students, they told me that my children’s names had been removed as we were away for 6 months.

We didn’t stay there by choice. In the last 1.5 years, my children haven’t studied anything and I cannot afford tuition,” says Puja Devi*, a domestic worker and parent of two primary school children in Delhi.

Schools in India are not just a source of education but also provide access to health, hygiene, immunisation, and nutritional safety nets. India’s Mid Day Meal Scheme (MDM), one of the largest school feeding programmes in the world, has been widely studied for its positive associations with an increase in attendance, decreased rates of malnutrition, and prevention of stunted growth across generations.

The scheme mandates government schools to provide one cooked meal per day to their students. It is estimated that 115.9 million children in India benefit from midday meals. Schools and anganwadi centres are primarily responsible for the delivery of these hot, cooked, nutrition-rich meals.

As the pandemic led to the closure of schools and anganwadi centres in March 2020, the Supreme Court of India directed states and union territories to disburse midday meals to students in the form of take-home rations, dry rations, or cash transfers. However, the supply and implementation of this have been inadequate.

According to an Oxfam report, 35 percent of children did not receive midday meals in 2020, despite government orders. While closing schools has potentially protected children from COVID-19, it has certainly resulted in a loss of nutrition for children in India.

Here are some facts to be considered while accounting for the health risks for students, resulting from school closures:

It is predicted that India will not meet its target of reducing undernutrition and low birth weight by two percent by 2022, under the POSHAN Abhiyaan. The continued school closures will further lead to increased malnutrition in India.

Despite the central government’s efforts to increase the per-child cooking cost and the budget of nutrition-related programmes, the closure of schools—which are responsible for the delivery of hot cooked meals—is disrupting service delivery. Hence, it is important to consider the benefits of reopening schools for primary graders, in relation to the possible health risk caused by nutritional loss.

Things to remember when reopening schools

With 141 countries opening schools for some kind of in-person engagement, evidence from reopened schools shows a low risk of transmission—especially among primary and pre-primary students.

Countries such as France, the United Kingdom, Germany, and Italy appear to be taking into account the emerging evidence that schools have not been major centres of transmission of the virus, especially for young children. On July 20, 2021, the Indian Council of Medical Research also suggested that primary schools be reopened first, as children can handle viral infections better than adults.

As we look at the possibility of reopening schools in the wake of decreasing COVID-19 cases, it is crucial to prioritise the opening of schools for primary classes (Grades 1-7). This must be done to mitigate the impact of impaired nutrition and to promote cognitive growth. Here are some things we need to prioritise, in the context of reopening schools:

UNESCO has issued a framework for reopening schools with a strategic plan and measures such as masking, social distancing, ventilation, health, and academic assessment. The World Food Programme has also released guidelines on how to activate midday meal programmes while reopening schools.

While designing standard operating procedures for the reopening of schools, the state and central governments can refer to these guidelines and adapt them to the Indian context, in order to ensure that all safety protocols are followed.

While most Indian states are focusing on reopening schools for Grades 8-12, primary schools must also be reopened in a staggered manner. While the pandemic was not foreseen, the loss of socio-emotional learning and increasing malnutrition due to school closures could be a human-induced health epidemic, if not acted upon quickly.

Achalika Ahuja works with Indus Action, a policy implementation organisation that works to bridge the gap between law and action. Her area of interest lies in engaging with adolescent girls and women to apply community-based learnings for policy-level solutions. In the long term, she is interested in working towards social justice for underrepresented communities.

Mayurdhar Devolla is the lead of operations at Indus Action, a policy implementation organisation that works to bridge the gap between law and action. He works closely with the state teams at Indus Action and enjoys working with the government. His long-term focus is on building solutions for a positive social impact in education, sanitation, sports, and the environment.