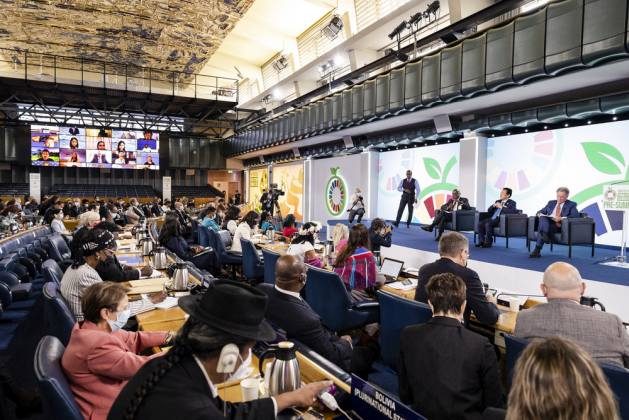 Meeting of the opening day of the UN Food Systems Pre-Summit, held at FAO headquarters in Rome from 26 to 28 July. Photo: Giuseppe Carotenuto /FAO

ROME, Aug 4 2021 (IPS) - The UN Food Systems Pre-Summit, held from 26 to 28 July in Rome, highlighted, as perhaps never before, that hunger can be defeated if we also manage to protect the environment, promote better nutrition and health. This new mentality and comprehensive approach consist of considering higher levels of economic investment to stimulate trade in agriculture and food and pursue a path towards a sustainable future.

At this meeting, it was agreed to establish forms of common interaction through thematic coalitions that allow joining efforts to achieve zero hunger, reduce food waste, guarantee school feeding, face deciding factors of agroecology, as well as the management of data in the agricultural and food area and different kinds of resilience, among other goals.

Current data continues to show a negative trend of a permanent increase in people facing hunger. Today, more than 810 million are hungry and there is the danger that this trend will continue to increase as a result of the pandemic’s impact on the world economy, which could lead to another 100 million people going hungry

For the first time in the era of COVID-19, the Pre-Summit allowed more than 500 representatives of governments, the private sector, civil society and science to physically gather at FAO headquarters in Rome, while thousands of senior government, private sector and civil society officials from more than 130 countries participated online.

Current data continues to show a negative trend of a permanent increase in people facing hunger. Today, more than 810 million are hungry and there is the danger that this trend will continue to increase as a result of the pandemic’s impact on the world economy, which could lead to another 100 million people going hungry.

Hunger is a health issue, therefore, we must ensure that sustainable healthy diets are affordable and accessible to everyone.

The meeting also discussed how reducing food waste, which already exceeds an annual cost of 400 million dollars and reaches or exceeds a quarter of the global food production that would perfectly meet the needs of the world population, would improve the global food supply.

For this to happen, new economic investments should be adopted, as well as substantial improvements in the food production system itself, in the adaptation of infrastructure, in trade, and so on.

Innovation and technological development are key in the immediate future of this sector. In addition, social protection and respect for local cultures, especially indigenous, are other aspects to take into consideration for the transformation towards more sustainable food systems.

Advancing in this process to achieve no poverty (SDG1) and zero hunger (SDG2) by 2030 – two of the 17 Sustainable Development Goals (SDGs) of the global Agenda launched by more than 150 heads of State and of Government in September 2015 in New York – demands heavy investments. To reach the global goals in the next nine years, an estimated 14 billion in investments is necessary.

Based on this data, governments need to adjust their budgets, development banks need to play a more active role and private sector companies should assume a greater commitment in this delicate phase, thus also generating greater support for small and medium rural producers and to family farming.

Generating synergies and a coalition of countries, regions, public and private players was also the focus of attention at the meeting of the Ministers of Foreign Affairs and Cooperation of the Group of 20 (G20), which was held on 29 June in the Italian city of Matera, where they agreed to join efforts to advance in the building of an operational coalition that allows achieving zero hunger by 2030.

To have healthy food, we need a healthy environment, and must reverse the loss of biodiversity and land degradation, increase the efficiency of water use and promote the sustainable management of water resources to improve food quality.

The lives of more than 1 billion people are severely limited by water scarcity or restriction. Almost 1 billion hectares of pasture and arable land are severely affected by recurring droughts and more than 60 percent of irrigated arable land is subject to high or very high stress due to a lack of water.

In September, within the framework of the United Nations General Assembly in New York, the Summit on Food Systems will be held with the participation of Heads of State and Government. It will summarize the debates in Rome on how to address the transformation of the sector and discuss the way forward towards a phase of greater action to make up for lost time get back on track to achieving the SDGs by 2030.