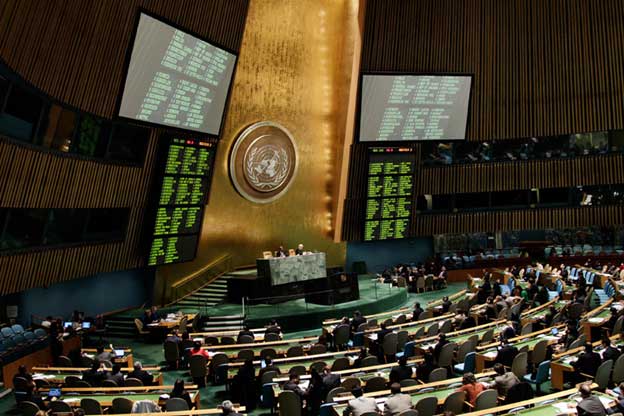 UNITED NATIONS, Sep 13 2021 (IPS) - When the high-level segment of the 76th session of the UN General Assembly opens September 21, the Islamic Emirate of Afghanistan is unlikely to occupy a much-coveted seat in the world body.

But still, it is expected to eventually wind its way to the Assembly Hall, perhaps later this year or sometime next year– provided it has the blessings of the UN’s nine-member Credentials Committee and the 193-member General Assembly.

And more importantly, the Biden administration has to establish diplomatic relations with the Taliban government, whose officials may be on a US sanctions list which bars them from entering the United States.

If the Taliban delegation is denied a US visa, the Biden administration will be in violation of the 1947 UN-US headquarters agreement under which Washington was expected to facilitate — not hinder– the smooth functioning of the world body.

But the agreement does not cover any extremist insurgent groups seeking to enter the UN.

When Yassir Arafat was denied a US visa to visit New York to address the United Nations back in 1988, the General Assembly defied the United States by temporarily moving the UN’s highest policy making body to Geneva– perhaps for the first time in UN history– providing a less-hostile political environment for the leader of the Palestine Liberation Organisation (PLO).

But as of now, a guessing game is on at the United Nations: Will the Taliban government make it to the General Assembly thereby gaining international recognition and legitimacy?

If it does, it will be one of the first UN member states – or perhaps the only one — which is headed by an extremist insurgent group once designated as a “terrorist organization” by the United States.

Unlike a new member state that requires a Security Council approval, a change in government is normally automatic with the Credentials Committee approving, and then the General Assembly rubber stamping, said Weiss who has written extensively on the politics of the United Nations.

In the case of the Taliban, he pointed out, time is short and, of course, the change was not the product of an election. Given the Taliban’s past and current behaviour, many member states are likely to object, he predicted.

Still, there has to be an alternative government to object, and so it is crucial to see whether (former Afghan President) Ashraf Ghani (who fled to the United Arab Emirates) will come out of hiding and object.

“That is unlikely, but if he does, I think that the historical precedent would resemble Cambodia/Kampuchea and Sihanouk/Khmer Rouge rather than the ongoing discussions about Myanmar”, said Weiss, Director Emeritus, Ralph Bunche Institute for International Studies at the City University of New York (CUNY) Graduate Center.

Laying down her country’s demands, Ambassador Barbara Woodward of the UK, a permanent member of the Security Council, said last week the UK will calibrate its approach to the Taliban based on the choices and actions they now take – namely on safe passage, terrorism, humanitarian access, human rights and inclusive government.

There are a number of functional things which need to be sorted out and followed before the Credentials Committee (CC) considers the matter.

“I think the CC would take its time to consider the credentials of the new Afghan representative to the UN and subsequently of its delegation to the 76th session. I am sure UN’s Under-Secretary-General for Legal Affairs is fully seized with the matter and would advise the CC, if asked on behalf of the Secretary-General.’

But much however depends on how the US and other Western countries would like to address the question, Ambassador Chowdhury declared.

Meanwhile, the Credentials Committee may seek an easy way out by deferring any immediate action on the recognition of the Taliban government– as it has done with the military junta in Myanmar which has, so far, unsuccessfully sought the UN seat held by the former democratic government.

Asked about the status of Taliban’s UN membership, Secretary-General Antonio Guterres told reporters last Friday: “The recognition of governments is not done by the Secretariat of the United Nations, as you know; it is done by Member States, and is done by the bodies of the UN. But we are permanently engaging with the Taliban, and we believe that a dialogue with the Taliban is absolutely essential at the present moment. “

Asked whether UN Security Council should lift the sanctions on members of the Taliban, some of whom are now representing the interim government, he said: “First of all, I think that what would be positive is to have simultaneously the formation in Afghanistan of an inclusive government — the fact that the government respects international commitments made by the Afghan State, and that a number of the concerns that we have expressed about terrorism, human rights, etc., are taken into account”.

These, he said would lead to a normalisation of the relations of the international community with Afghanistan.

Weiss, author of the “Would the World Be Better without the UN? (2018), pointed out that there will be a new Credentials Committee later this week.

“As merely a majority vote in the General Assembly is required, I would have thought that it would be difficult not to seat the Taliban, especially as China seems to be courting the new government, undoubtedly dangling investment and recognition in exchange for the commitment to steer clear of supporting the Uyghurs”.

If China insists and calls upon its other clients, there will be the required 50 percent. US and Western “silence” (not assent) could probably be secured for guarantees about safe transit for the remaining citizens and supporters trapped in Afghanistan.

Continue leverage will result from the requirement to issue visas to individuals on the list of terrorists, Weiss declared.

“Needless to say, the names in the caretaker government do not inspire confidence in that last regard. We’ll have to see what emerges in a more permanent government,” he added.

Blinken also clearly laid out the US position last week when he told reporters: “The Taliban says it seeks international legitimacy and international support. And that will depend entirely on what it does, not just on what it says. And the trajectory of its relationship with us and with the rest of the world will depend on its actions”.

Now, the Taliban has made a series of commitments, publicly and privately, including with regard to freedom of travel, with regard to combatting terrorism and not allowing Afghanistan to be used a launching point for terrorism directed at us or at anyone else, including as well upholding the basic rights of the Afghan people, to include women and girls and minorities, to have some inclusivity in government, to avoid reprisals.

And these are very important commitments, he added.

The international community has also set clear expectations of the Taliban-led government. More than 100 countries signed onto a statement that the US initiated on those very commitments. The United Nations Security Council has made clear its expectations.

“And so, for us – and not just for us, for many countries around the world – the nature of the relationship with the government going forward will depend on the actions it takes,” said
Blinken.