MEXICO CITY, Oct 20 2021 (IPS) - They call it the Tlaxcala-New York Route. Between one end and the other, there are 2547 miles. An infamous road that today is one of the most important channel for human trafficking gangs. And a route seemingly impossible to destroy because of its million-dollar profits. 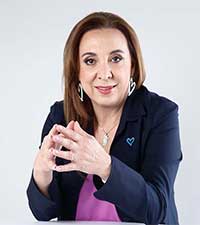 The victims traveling along this route from Mexico to the United States experience in their bones what experts call “the globalization of organized crime”, one of the biggest obstacles to ending this crime.

The route is longer than itself. Sometimes it starts in South America, where victims are lured with dream jobs or a love story in Mexico. And it has a stopover in Mexico’s smallest state, Tlaxcala, where human traffickers kidnap their victims to prepare them for their journey north to the United States.

The worst part is in the next 2547 miles, which includes several horror stops throughout Mexico. The victims will be raped on table dances, brothels, bars, even trailer boxes and roadside tents.

If they survive and show endurance, at least 500 of them will be forced to cross illegally into the United States every year.

In New York, the exploitative clients will be of all nationalities: Mexicans, Americans, Europeans, Asians, Africans… sex tourists who will take back home a piece of humanity as a souvenir.

Since the beginning of the 21st century, organized crime has demonstrated that they know how to go global and evade the isolated efforts of individual countries. Their modus operandi imposes a new vision: if traffickers think internationally, justice must think globally. The “10 Days of Anti-Trafficking Activism” event was dedicated to that task.

Between July 26 and August 6, survivors, activists, and decision-makers debated online and face-to-face in Washigton, Miami and Mexico City for more than 240 hours on how to face the new challenges that impose this old crime and how to stay one step ahead.

Jeremy Vallerand, Rescue Freedom CEO, reminded us that human trafficking is a social problem that is not natural but created by human beings, so it is up to us to end it.

The Executive Director of Global Sustainability Network (GSN), Asmita Satyarthi, called for a global count of victims — there are about 25 million people in human trafficking networks and 30% of them are children.

Héma Sibi, CAP International’s Advocacy Coordinator, asked that we all demand a change of laws at an international level. New laws that punishes exploitative clients, not people who are forced into prostitution.

It is urgent to create international laws that punish trafficking as a crime against humanity. To train police officers with the capacity to investigate this crime beyond national borders. To establish international agreements for financial intelligence units to return to the victims’ money obtained by traffickers, whatever country they are in.

Pivotal actions must go beyond prosecution. More and better prevention campaigns must be created to build bridges between rich and developing countries because that is where the exploiting clients and the exploited person are. National campaigns are no longer enough. The challenge is to build messages thinking about the origin and destination of the victims.

We need more determined participation of society to train new activists with a global perspective and place this topic on the world agenda with the same urgency as other problems faced by humanity, such as climate change or the equitable distribution of food.

Above all, there is an urgency to pass the megaphone to those who have a story that must be heard, because each victim in silence means the loss of a missing ally in the fight against this crime.

The “10 Days of Anti-Trafficking Activism” is one of those crucial events that help us begin to solve those questions that overwhelm us: Where do we start? What is the origin of all this? And by questioning ourselves, we will be able to find how to end those 2547 miles of suffering between Tlaxcala and New York.

So that one day, the seemingly impossible path to defeat will be a memory and the evidence that millions of dollars are not more powerful than millions of people fighting for a world without slavery.