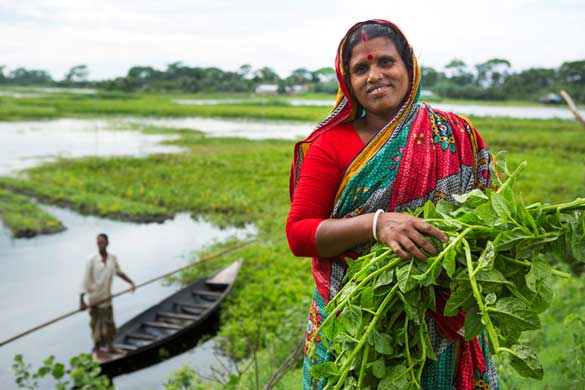 But for the people who are most marginalized, the impacts of climate change are already severe and worsening, necessitating an expansion of climate resilience interventions too.

Women, particularly in climate vulnerable countries in the Global South, are set to bear many of the worst impacts of the climate crisis. More than half of people displaced by climate change are women and girls, and climate shocks reduce women’s life expectancies more than men’s on average.

Poverty is increasing women’s climate vulnerability even further. Women are more likely to experience extreme poverty than men, and women in extreme poverty often lack the resources and tools to bounce back from the economic impacts of climate change, facing exclusion from social policies and programs.

Climate change will continue to exacerbate these inequalities, driving up to 132 million people into extreme poverty by 2030 due to rising food prices, health shocks, and natural disasters.

But these disasters are not “natural”. Climate change is human-made, and we as an international community can take the steps needed to support preparedness, mitigation, adaptation, and recovery efforts.

Countries can prevent the worst impacts of climate change on their most vulnerable populations through increased funding and focus on building climate resilience for those furthest behind in our current system, including women in extreme poverty.

But how can we make climate resilience policies and programs more inclusive and effective?

In our experience advising on interventions at the intersection of extreme poverty, gender inequality, and climate change at BRAC Ultra-Poor Graduation Initiative (UPGI), we have identified three key learnings.

First, policies and programs must actively seek to identify the most marginalized households to ensure their inclusion. To enable women in extreme poverty to build climate resilience, development actors must first reach them.

This population is often excluded from existing social protection programs, with 79 percent of the bottom quintile of earners in low-income countries receiving no social assistance whatsoever.

To empower marginalized households to build resilience specifically for climate shocks, interventions should factor in an analysis of which households are most climate vulnerable, combining this with other methods including an analysis of the enabling environment (including existing infrastructure, programs, policies, and social norms).

This is just one example of the ways development actors will need to consciously target excluded populations on the basis of both climate and socioeconomic vulnerabilities as climate shocks worsen.

Second, interventions must be adapted to local needs. For climate resilience interventions to have an impact on women in extreme poverty, they need to take into account local contexts, markets, and challenges.

For example, in drought-prone regions of Kenya, people in extreme poverty are especially vulnerable to the effects of climate change as many rely on raising livestock. Their livelihoods are threatened by worsening droughts, especially women and youth.

Between 2016 and 2019, the Government of Kenya and International Fund for Agricultural Development (IFAD) partnered with BRAC, CARE Kenya, and The BOMA Project on a climate-adaptive Graduation program in Kitui and Samburu provinces to strengthen the resilience of women, youth, and their households to climate shocks.

The program encouraged participants to maintain multiple sources of income and to save for economic and climate shocks to minimise their risk of losing livelihoods. As a result, over 80 percent of households had at least two income sources at the end of the intervention. 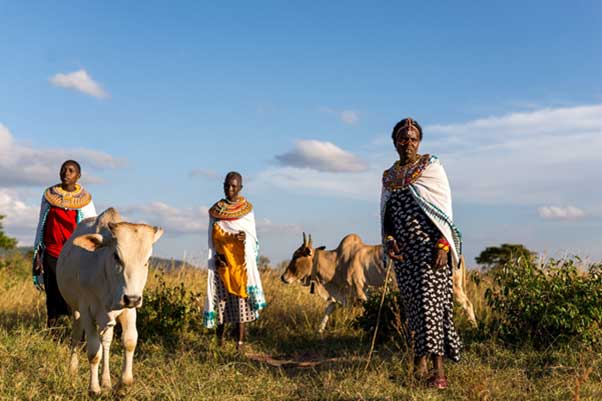 Worsening droughts threaten the livelihoods of women in the rural, ASAL regions of Kenya. Credit: BRAC/BOMA 2018

In Kairouan, Tunisia, women in extreme poverty are especially vulnerable to climate risks such as increased frequency and severity of extreme weather, changes in temperature and precipitation, and increased soil erosion.

To address these risks, the Tunisian government has partnered with IFAD and BRAC on a Graduation program identifying climate-adaptive, gender-sensitive livelihoods for participants that are designed for the local context and providing training on saving, diversifying incomes, and withstanding climate shocks.

By taking into account local climate vulnerabilities and challenges for women in extreme poverty, climate resilience programs can empower them to not only withstand climate shocks, but also build long-term livelihoods and savings which enable them to create a path out of the poverty trap and prevent them from falling back into it.

Third, constant learning through evaluation and iteration is crucial to impact. To develop and scale effective approaches which combat climate-induced poverty, the international community needs to increase their support and commit significantly more resources to evidence-based interventions.

Development actors and their research partners should also take an iterative approach, evolving programs over time based on findings from internal and external evaluations in parallel. By regularly reevaluating program design and delivery, implementers can not only improve impact at scale, but also become more responsive to changes in the local context.

This is particularly crucial for interventions aimed at building climate resilience for marginalized populations, as it enables programs to constantly adapt to climate impacts on programming.

At BRAC UPGI, we see every day how worsening climate shocks have the greatest impact on the people who contribute the least to climate change and have the fewest resources to recover from them.

This COP26, international actors, including multilateral institutions, governments, and civil society, need to not only increase climate spending, but ensure climate adaptation funds are spent more equitably, going to countries and populations which are most impacted and least equipped to withstand shocks.

To advance toward the Sustainable Development Goals and uphold obligations to their people, they need to back policies and programs which protect the people who are most marginalized from the worst impacts of the climate crisis and enable them to build resilience to endure future shocks by designing programs that meet their multidimensional needs.

Julie Kedroske is Acting Director of Technical Assistance, BRAC Ultra-Poor Graduation Initiative. Originally founded in 1972 as the Bangladesh Rehabilitation Assistance Committee and later known as the Bangladesh Rural Advancement Committee, BRAC’s operations have grown globally and with that growth, the organization is now simply known as BRAC.