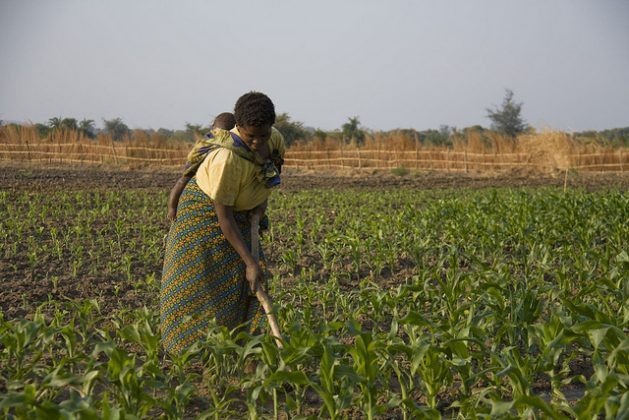 Women produce between 60 and 80 per cent of food in developing countries but own only 2 per cent of land worldwide. Credit: Kristin Palitza/IPS

MADRID, Oct 18 2021 (IPS) - While more than a third of all purchased food is wasted in rich, mostly Western States, and a similar percentage is lost in poor countries due to the lack of appropriate harvesting, storage and transportation facilities, over three billion people –or some 40 percent of world population– cannot afford a healthy diet.
Add to these figures –which were released by UN’s Food and Agriculture Organization (FAO) on 16 October this year, marking the World Food Day— another dramatic fact.

According to the World Bank, between 88 and 115 million people are being pushed into poverty as a result of the COVID 19 crisis, with the majority of the new extreme poor being found in South Asian and Sub-Saharan countries where poverty rates are already high.

This number adds to the more than 850 million people sinking already into hunger and extreme poverty, following United Nations estimates.

One billion food producers; one billion poor and hungry

These figures all combined raise the number of hungry and poor ​and extremely poor ​people worldwide to over one billion, that’s one in seven persons living on Planet Earth. That’s the same number of people –1 billion– that agri-food systems employ worldwide, more than any other economic sector.

Moreover, the way food is being produced, consumed and wasted exacts a heavy toll on our planet, putting unnecessary pressure on natural resources, the environment and climate, according to FAO.

“Food production too often degrades or destroys natural habitats and contributes to species extinction. Such inefficiency is costing us trillions of dollars, but, most importantly, today’s agri-food systems are exposing profound inequalities and injustices in our global society. Three billion people cannot afford healthy diets, while overweight and obesity continue to increase worldwide,” warns this world body.

They produce more, but eat less

Should all this not be enough, another aspect of overwhelming inequalities dominating current time, please also know that rural women make up to 40 percent of all food producers, according to the UN.

Nevertheless, rural women eat less, prioritise available food to their families, let alone bearing with the heavy burden of carrying water, cooking, washing, cleaning, selling food in local markets and streets, among other daily tasks, all of this without having in most cases in poor countries the rights to land property, among others.

Just an example: there are many millions of women who produce between 60 and 80 per cent of food in developing countries but own only 2 per cent of land worldwide, says in this regards the UN Environment Programme.

Furthermore: the UN Women, which devotes its work to promoting gender equalities, estimates that in 2020, some 2.37 billion people did not have access to adequate food.

“This is an increase of almost 20 per cent in just one year, where those most affected were again rural women and girls.”

On this, the entity on 15 October this year, on the occasion of the International Day of Rural Women, reported that across the world, food systems depend on the daily work of rural women.

“They play a variety of essential roles, from raising crops and processing their harvest, to preparing food and distributing their products, ensuring that both their families and communities are nourished.”

One of the causes is armed conflict. On this, Oxfam International reports that overall, 155 million people around the world are living in crisis levels of food insecurity or worse – that is 20 million more than last year. “Around two out of every three of these people are going hungry primarily because their country is in war and conflict.”

Women and girls are disproportionately affected. They face extraordinary dangers to secure food, and yet, too often eating last and eating least. Conflict and displacement have also forced women to abandon their jobs or miss planting seasons, adds this coalition of independent Non-Governmental Organisations, devoted to fighting inequalities.

Last but not least, such harsh inequalities are growing rapidly due to fast developing climate emergency, the drastic cuts in rich countries humanitarian assistance, the predominance of industrial food systems, intensive cultivation and harvesting, etcetera.

What fate for all these billions of hungry and extremely poor people in a world that produces enough to feed all of them?