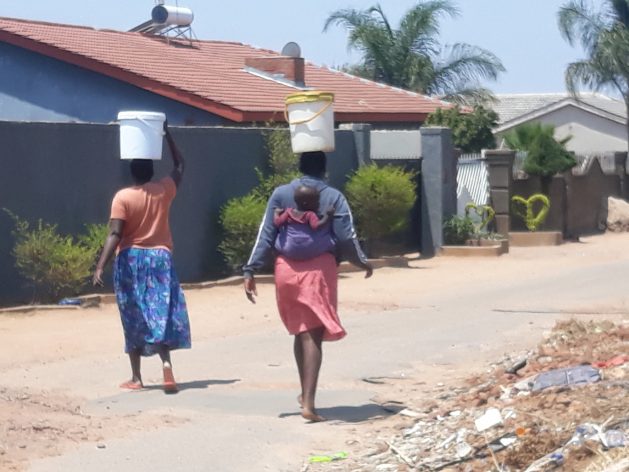 Erratic water supplies mean women in urban Zimbabwean cities, like Bulawayo, need to fetch water from water points. Studies have shown that while water, sanitation and hygiene are a women’s domain, they are not involved in water management. Credit: Ignatius Banda/IPS

Bulawayo, ZIMBABWE , Oct 19 2021 (IPS) - Each morning, Langelihle Tshuma checks her taps to confirm the water supply before preparing for the day ahead.

Despite living in the city, the married housewife and mother of four has become accustomed to what in most cities would be considered an essential service.

“We are used to it now,” she said, referring to water cuts in Zimbabwe’s second city of Bulawayo.

Water availability has become erratic in the city, with no clear schedule or fixed timetable to warn residents about when to expect dry faucets.

Tshuma joins scores of other residents to look for the nearest water point or the next house with a borehole in what is considered a middle-class suburb.

“It used to be kind of humiliating walking around the neighbourhood with buckets looking for water, but when you have young children, you learn humility to soldier on,” Tshuma told IPS.

While her experience is commonplace in this city of about 2 million people according to some estimates, it is but a microcosm of a global trend where women’s unpaid work includes fetching water, with women being left out in crucial decisions regarding water access, experts say.

There are concerns among researchers and experts that water, sanitation, and hygiene (WASH) issues have for years been regarded as a woman’s domain in developing countries, but that has not been reflected in the management of water resources.

According to the research findings in the report titled Advancing towards gender mainstreaming in water resources management, “when women are involved in the management of water resources, their communities achieve much better outcomes, improved water systems and economic and environmental benefits.”  The research canvassed 23 countries.

The GWP notes that while women’s role in Integrated Water Resources Management (IWRM) was recognized three decades ago by the UN, there has been little progress as the sector remains male-dominated.

“Half of all countries reported limited or no achievement of gender objectives in their water management policies and plans,” said Darío Soto-Abril, Executive Secretary of Global Water Partnership (GWP).

“While some reasons for this low number might be a lack of robust data collection and monitoring tools, the number is still low enough for us to say: it’s past time for things to change,” Soto-Abril said.

As women such as Tshuma struggle to access and remain excluded from the decisions that bring water to their homes, experts note that gender mainstreaming is crucial to ensure commitment at the highest political levels for policy commitments is backed up by action.

“If there is good news, it is that there’s been a slight improvement compared to the baseline in 2017,” said Joakim Harlin, UNEP’s chief of Freshwater Ecosystems.

“The ability to integrate gender considerations in water policies is not related exclusively to levels of development – it’s also a question of having the political will to change cultural norms,” Harlin said.

Cultural norms have embedded the images of women and not men fetching water in urban municipalities of many developing countries.

“Women have been cast in roles as water carriers instead of water managers,” the GWP research notes.

“In many developing countries, women are the de facto water decision-makers in households. Research suggests that when women are involved in the management of water resources, their communities achieve better economic and environmental benefits. As the world’s population grows and climate change intensifies water scarcity, women are key to providing more sustainable access to this finite resource,” the report adds.

However, more still needs to be done along with increasing women’s participation in decision-making positions in line with Sustainable Development Goals (SDGs), says Liza Debevec, Senior Gender and Social Inclusion Specialist at the Global Water Partnership.

“It is not just about increasing women’s representation in councils and committees or coming up with a new general legal framework on gender protection, however important those actions are,” Debevec said.

“It is also about integrating gender issues in all policies in a cross-cutting manner, linking water to other relevant policy areas,” she said.

However, political will is seen as central to ensuring women are involved in policy-making decisions regarding water resources in line with the Integrated Water Resources Management Support Programme under Sustainable Development Goal 6 (SDG6), which seeks clean water for all.

“Political will is urgent. At the top political level, we need a strong commitment to gender mainstreaming, or we’ll be swimming upstream,” Soto-Abril told IPS.

“Political will makes the practical actions successful. Some countries need more data, so they need to do a gender analysis. Others need to financially support the implementation of gender-sensitive practices and introduce accountability mechanisms,” she said.