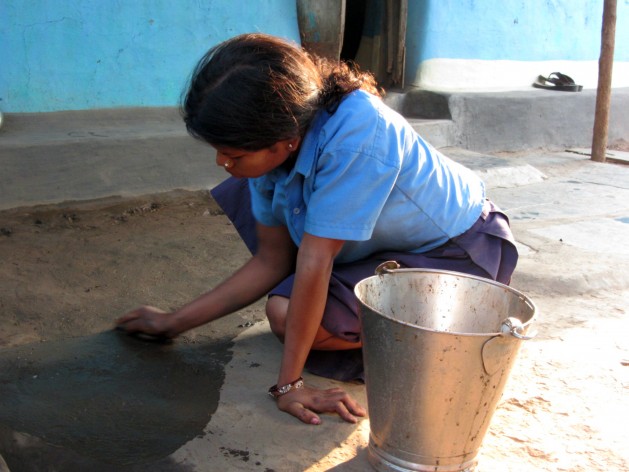 Globally, nine million additional children are at risk of being pushed into child labour by the end of 2022 as a result of the COVID-19 pandemic, which could rise to 46 million without access to critical social protection coverage. Credit: Stella Paul/IPS.

MADRID, Nov 19 2021 (IPS) - Kailash Satyarthi,  an Indian social reformer and co-recipient of the 2014 Nobel Peace Prize, along with Malala Yousafzai, spoke in a recent international forum about the devastating impacts of child labour.

“Nothing is as brutal as the death of a child’s dream,” said Satyarthi, who campaigned against child labour in his homeland. “We should feel the moral responsibility that we have to fulfill the dreams of these children.”

The Global Solutions Forum was held in the context of the International Year for the Elimination of Child Labour, and it brought together representatives from government ministries, farmers’ organisations, workers’ groups, and development banks, businesses, as well as children, youth advocates, and former child labourers.

The Nobel Peace laureate’s words came ahead of the 2021 World Children’s Day, marked 20 November. The Day’s theme is–ironically: A Better Future for Every Child.

The nation of 160 million plus children

These children form a nation of 160 millions plus victims, the double of a big European country’s -Germany- total population. They do not know each other, but they are all victims of the current prevailing human rights abuses.

Millions of them are trapped in hazardous work, and they are also easy prey to human trafficking.

Two-thirds in the rural sector

Given that more than two thirds plus –or 70%– of all these boys and girls are rural workers, Qu Dongyu, the director general of the UN Food and Agriculture Organisation (FAO), has urged ways to stamp out the practice –which he called “a serious violation of human rights,”– by the year 2025.

For them, Qu stressed that effective action and strong and coherent leadership from agri-food stakeholders across the globe is critical. “Child labour deprives boys and girls of their childhood, their potential and dignity, while also being harmful to their physical and mental development.”

Although not all work carried out by children is considered child labour, “much of it is not age-appropriate, and many vulnerable families, especially in rural areas, have no choice.”

Also in services and industry

While the agriculture sector accounts for 70% of children in child labour, it is followed by 20% in services and 10% in industry.

Child labour is more prevalent among boys than girls at every age but when 21 hours per week of household chores are taken into account, the gender gap in child labour narrows.

In sub-Saharan Africa, population growth, recurrent crises, extreme poverty, and inadequate social protection measures have led to an additional 16.6 million children in child labour over the past four years, according to this year’s report Child Labour: Global estimates 2020, trends and the road forward, elaborated by the International Labour Organisation(ILO) and the UN Children Fund (UNICEF).

Globally, nine million additional children are at risk of being pushed into child labour by the end of 2022 as a result of the COVID-19 pandemic, which could rise to 46 million without access to critical social protection coverage, the two world bodies have reported.

“Additional economic shocks and school closures caused by COVID-19 mean that children already obliged or forced to work, may be working longer hours or under worsening conditions, while job and income losses among vulnerable families may push many more into the worst forms of child labour,” according to Guy Ryder, the ILO director general.

Ryder also underlined that child labour did not have to continue indefinitely. “Child labour is not an escape road from poverty, it actually prolongs poverty; it makes poverty inter-generational,” he said.

This year’s World Day Against Child Labour, warned in its campaign: ‘Victims’ Voices Lead the Way’ which is aimed at putting a spotlight on victims’ untold stories, and on their roles in the fight against trafficking, warned that progress to end child labour has stalled for the first time in 20 years, reversing the previous downward trend that saw the number put to work fall by 94 million between 2000 and 2016.

The UN Secretary General urged States to take action against human trafficking, where a third of all victims are children.

“The COVID pandemic has pushed as many as 124 million more people into extreme poverty. And “many millions” have been left vulnerable to the scourge of human trafficking.

“Criminals everywhere are using technology to identify, control and exploit vulnerable people,” the UN chief said, adding that children are increasingly targeted through online platforms for sexual exploitation, forced marriage and other forms of abuse.

Governments are aware, or at least they should. This practice against ten of millions of children is just one of the long list of human rights violations.

This is also the case of 1.000.000.000 child-girls who are either mutilated or forced to be mothers or both. Let alone the discrimination and marginisation against the millions of children who are forced to work… just because they are poor.