THE HAGUE, The Netherlands, Nov 9 2021 (IPS) - Tensions and hostilities persisted until early 2019, when the regime of Omar al-Bashir – to a large extent symbolized by oppressing minority groups in the Darfurs, Blue Nile state and South Kordofan – finally ended. Meanwhile, many inhabitants of the Nuba Mountains and other parts of South Kordofan, had escaped to South Sudan, which had become independent in 2011. There, they found, however, a country with even more interethnic strains and assaults, resulting, in addition to the innumerable internally displaced persons, the flight of 2.3 million citizens to six countries in the region. An area characterized by perpetual political and ethnic tensions which often resulted in border crossings in opposite ways. The present case of refugees from Ethiopia to the Republic of Sudan is an example of this phenomenon in the IGAD-region. (The Intergovernmental Authority on Development (IGAD) is an eight-country trade bloc in Africa that includes governments from the Horn of Africa, the Nile Valley and the African Great Lakes. Its headquaters is in Djibouti City) 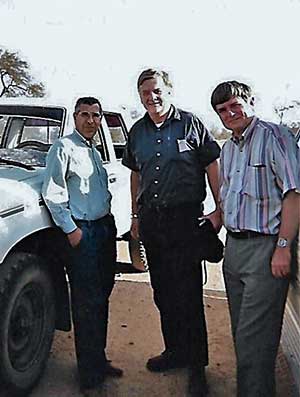 The author on the road between Dilling and Kadugli, the capital of South Kordofan in February 1999.

Through the ‘Juba Peace Agreement’ of October 2020, internal reconciliation would finally be realized in The Sudan. By this, creating an environment in which sustained rural and agricultural development programs could be implemented without major ideological or inter-ethnic frictions, including in Darfur and in the Nuba Mountains of South Kordofan.

The Transitional Government under the leadership of Prime Minister Abdalla Hamdok aimed at political and ethnic appeasement in order to foster development initiativeves all over the country. However, the military coup led by general Al-Burhan arrested Hamdok and all other civilian members of this interim government. Once again, many people went into the streets to protest. Once more demonstrators were arrested or killed. In addition, during the past two weeks the pressure from outside has gained momentum. The US and other countries, now even including Saudi Arabia and the UAE have urged Al-Burhan to release all persons and to return to civilian rule with Hamdok as Prime Minister.

The book ‘West of The Nile and Around The Sudd’ – published in May 2021 with 142 pp. containing a large number of pictures taken in the field – is about efforts by the International Fund for Agricultural Development (IFAD), a United Nations specialized agency and financing institution, aimed at designing of and monitoring the implementation of agricultural and rural development projects in the Republic of The Sudan. The country has ample natural resources for achieving food security and adequate income and living standards for the entire population, including the inhabitants of rural areas where there are no armed conflicts.

More specifically, the purpose of this book is to show how local data are collected as indispensable tools for the preparation of new development projects or for the supervision of on-going investment programs. Considering the latter, the book starts with the process of data-gathering during a supervision mission for the World Bank-led Southern Region Agricultural Project (SRAP) in October 1980, about two years after its start. This promising region-wide scheme, however, had to be terminated already in 1984, an effect of the conflict between the central government and forces of the Sudan People’s Liberation Army (SPLA).

The way of assembling information during the formulation mission in early 1999 for the design of the South Kordofan Rural Development Project is reflected in parts Three, Four and Five of the book. During meetings in villages and hamlets we were impressed both by the willingness of the local authorities to provide maximum information and the friendliness and openness of the inhabitants – families and individuals – in the way they received us and provided their opinions.

This project started its promising operations at the end of the year 2000. However, also in this case, during its implementation, time and time again, project activities have been affected by armed conflicts between government forces – frequently assisted by militias – and insurgents, historically located in the Nuba Mountains and other zones of South Kordofan. However, different from the SRAP, its implementation could continue. Nevertheless, as part Six in the book explains, time-wise and regionally, project activities had frequently to be halted in order to avoid clashes and combats. Moreover, in the final stages of 2012-2013, project activities had to be stopped, when, despite the 2005 Comprehensive Peace Agreement (CAP), hostilities in South Kordofan expanded significantly.

(On 19 December 2018, a few weeks before starting this book, I visited the ambassador of the Republic of Sudan in The Netherlands. During an informative, frank and pleasant meeting, I stressed that the time had come for President Omar al-Bashir to change his policies radically. Evidently, I was completely unaware that on the very same day in the historic city of Atbara, massive protests took place. These eventually triggered demonstrations and protests all over the country in which women played a major role. Finally, on 11 April 2019 Al Bashir was arrested. A promising era could commence).

The author of the book is a former United Nations IFAD senior official who was Director of the Near East and North Africa Division., in addition to other responsibilities.