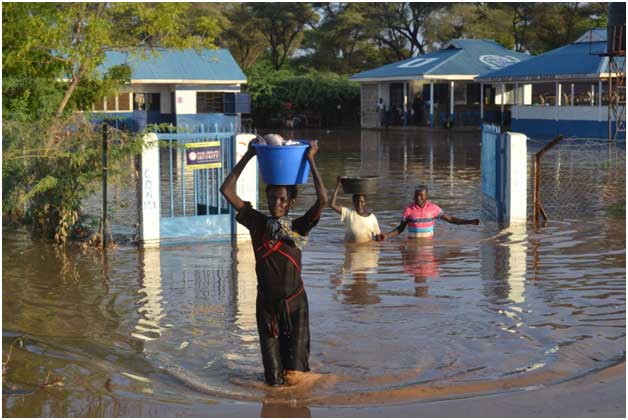 The larger the population size, the greater are the consequences on climate, environment, biodiversity and pollution. Credit: Isaiah Esipisu/IPS

The apparent reasons behind the denials and falsehoods include politics, profits, power, discrimination, notoriety, hopes, beliefs, contrariness, trepidation and escapism. Some of the more frequently promoted denials are considered below with information on demographic realities and likely future trends.

First, world population is NOT collapsing any time soon. World population has quadrupled over the past 100 years, from 2 to 8 billion and is expected to reach 10 billion around midcentury (Figure 1). 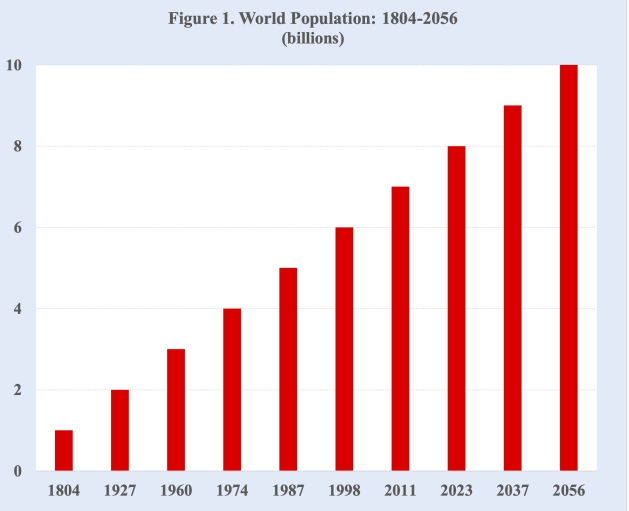 While the rapid growth of world population in the 20th century has passed, the world’s population is expected to continue growing over the coming decades. World population is now increasing by about 80 million annually and 2 billion additional people are expected by 2056.

For example, of the projected 1.8 billion increase in world population by 2050, 1.1 billion, or about 60 percent, is expected to occur in Africa and about a 0.6 billion, or 32 percent, in Asia. In contrast, the populations of Northern America and Europe, are projected to increase by 52 million, a 3 percent increase, and decrease by 37 million, a 2 percent decline, respectively (Figure 2). 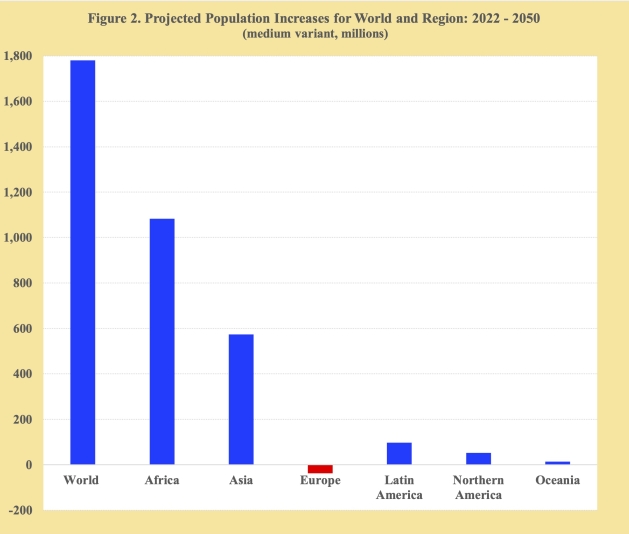 Third, international migration is NOT being resolved by high walls, long fences, sea patrols, immigrant visas or calls for people not to come. Immigration is a 21st century crisis with the numbers wishing to migrate far exceeding the levels acceptable to destination countries.

Governments, international agencies and regional organizations have not come up with workable solutions to address immigration. Authorities appear at a loss at what to do about the waves of migrants desiring employment, claiming asylum, seeking refuge, escaping climate change and risking their lives for decent living conditions.

International migration is NOT being resolved by high walls, long fences, sea patrols, immigrant visas or calls for people not to come. Immigration is a 21st century crisis with the numbers wishing to migrate far exceeding the levels acceptable to destination countries

Also, most unauthorized migrants are not being repatriated. Once unauthorized migrants are in the country, governments encounter difficulties sending them back to their home countries. After a lapse of time, an amnesty or a path to citizenship may be offered to those who are established. However, such actions can also serve as an incentive for others to migrate illegally.

Government leaders as well as many of their economic advisors are not prepared to acknowledge that population stabilization and degrowth are essential for addressing climate change. As witnessed at the UN Climate Change Conference in Glasgow, limiting population growth was not part of climate change negotiations.

In contrast to most country leaders who favor the continued growth of their respective populations, thousands of scientists worldwide are urging governments to stabilize or reduce the size of their populations along with other critical actions related to energy, short-lived pollutants, nature, food and the economy. Such actions would contribute significantly to efforts to address climate change and environmental degradation.

Fifth, the ageing of human populations is NOT a temporary phenomenon, and most governments are ill-prepared to deal with its wide-ranging consequences. For most countries and much of the world, youthful populations are the past and significantly older populations are the inescapable future.

Population ageing is the result of lower birth rates and increased longevity. The world’s fertility rate is half the level of the 1950s, 5 versus 2.5 births per woman, and life expectancy at birth has increased by more than 50 percent since then, from 47 to 73 years.

Population ageing is increasingly affecting fundamental aspects of human societies, including economics, taxes, employment, housing, pensions, healthcare and disabilities. Rather than hoping for a return to youthful age structures, government officials, business leaders and others need to prepare for population ageing.

Sixth, the vaccinated and unvaccinated for the coronavirus do NOT have similar mortality and morbidity rates. Being vaccinated substantially decreases the chances of death and illness from the virus.

Remaining unvaccinated unequivocally results in higher rates of mortality and morbidity. Unfortunately, those higher levels have contributed to declines in life expectancies at birth and heavily burdened communities where large numbers remain unvaccinated.

In brief, being unvaccinated increases the chances of death and illness from the coronavirus. In contrast, the coronavirus vaccines, like past vaccines for major diseases, such as smallpox, tetanus, hepatitis, rubella, pertussis, pneumonia, measles, and polio, are effective in reducing mortality rates, illness, the virus’ spread and societal costs.

Seventh, women do NOT want to remain in the home. During the 20th century, significant social, economic, and political progress was achieved in women’s equality. That progress has been greatly facilitated by improvements in women’s health, education, employment, urbanization, delayed marriage and childbearing, and declines in family size.

Also, many women do not want to return to matrimonial inequalities where husbands were household heads, made major decisions and controlled finances and property. However, some conservative groups are resisting attempts to achieve gender equality and seek to maintain traditional roles and lifestyles. Simply stated, those groups want women to remain in the home and love, honor and obey their husbands.

Eighth, couples do NOT want to have many children. Despite public hissy fits, policies and incentives by officials, business leaders and others aimed at raising fertility, birth rates are not likely to return to the comparatively high levels of the past.

In country after country, most couples who decide to have children are having one or two. As fewer women are giving birth to four or more children, fertility rates have fallen in every major region. Except for sub-Saharan Africa, the fertility rates of most countries will likely be below replacement in the coming decades (Figure 3). 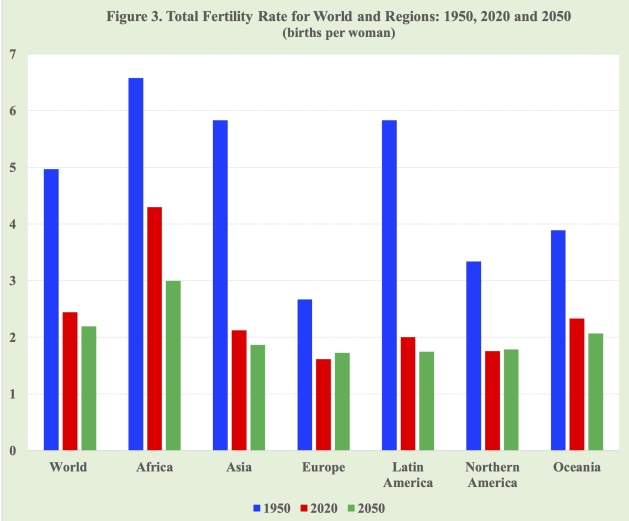 Ninth, most nations are NOT against induced abortion. Countries vary in their policies concerning abortions depending on the specific grounds. Abortions are permitted in 98 percent of countries to save the life of the woman, 72 percent for a woman’s physical health, 60 percent for rape, incest or fetal impairment, and 34 percent at the woman’s request (Figure 4). 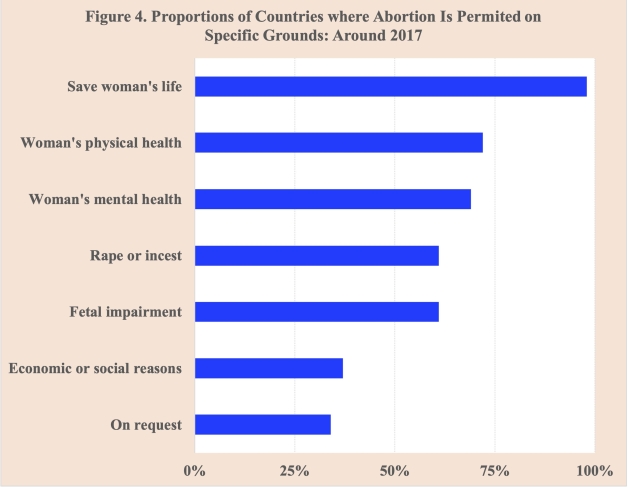 Over the past five decades, an unmistakable trend has taken place in the liberalization of abortion laws. The trend has coincided with a decline in abortion rates worldwide.

Making abortions illegal, however, does not prevent abortions from occurring. Even when abortions are severely restricted, illegal abortions take place in relatively large numbers. Approximately 8 percent of maternal deaths globally are the result of complications from unsafe abortions, with nearly all taking placing in developing countries.

Tenth, the traditional family is NOT the overwhelming societal norm worldwide. A working father, stay-at-home mom, several children, and a marriage “until death do us part” are increasingly characteristics of families in the past.

In many countries being married has become less of a necessity for financial survival, social interaction and personal fulfillment. More people are cohabiting, increasing proportions of couples are having births outside marriage, and many governments help single-parent families. In addition, same-sex marriages are now performed and recognized in 31 countries.