A woman, accompanied by a child, casts her vote during the general elections in Mozambique. Meanwhile, the United Nations marked the annual International Day of Democracy last September calling on world leaders to build a more equal, inclusive and sustainable world, with full respect for human rights. Credit: UNDP/Rochan Kadariya

KATHMANDU, Nepal, Jan 14 2022 (IPS) - There is no doubt that the building the magnificent Women’s Pavilion at the Dubai World Expo 2020 deserves unconditional praise and admiration, a bold landmark that projects the concept of gender empowerment and gender equality.

Yet at the same time I am wondering why the organizers of the World Expo didn’t come up with a different kind of pavilion, one focused on democracy and people’s participation in policy affairs.

On many ways, celebrating women but overlooking democracy and with it, one of its prerequisites and at the same time, byproducts, human rights, is a contradiction that, unfortunately should not shock us considering the overall state of democracy and human rights around the world.

In this context the Summit for Democracy organized by President Biden in December was an important undertaking.

It wasn’t because United States of America was behind it, a country that, as we know, it is dealing with some deep fractures in terms of in issues related to voting rights and universal franchise.

It was but because the Summit was a symbolic gesture, a statement about, on the one hand, the relevance and resilience democracy still has for millions of people around the world and, on the other hand, almost paradoxically, about its vulnerability and fragility.

If many people still can exercise their franchise and freely express their opinion, global reports like the Global State of Democracy 2021 Report published by the Institute for Democracy and Electoral Assistance, IDEA, it is clear that democracy is under assault both in traditional liberal democratic settings as well as in regions with emerging democratic practices.

Unfortunately, the ongoing geopolitical dynamics are preventing a neutral debate about the future of democracy and instead a clash of perspectives and with it, different political systems, is prevailing, hampering an important conversation.

On the one hand, there is the liberal democracy model based on periodic elections and on the other side of the spectrum, we find the one-party ruling system.

In the between, a mix of hybrid models that, while formally embracing electoral democracy, act more like authoritarian regimes.

Yet perhaps there is another way to look at this equation, a possibility that would put universal human rights at the center of any political system being embraced, regardless its voting practices. 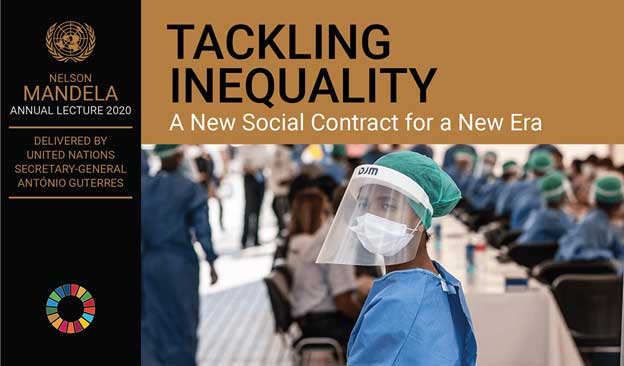 “The response to the pandemic, and to the widespread discontent that preceded it, must be based on a New Social Contract and a New Global Deal that create equal opportunities for all and respect the rights and freedoms of all.” – UN Secretary-General António Guterres. Credit: United Nations

You might not be able to periodically elect your representatives but still in practice, you could enjoy freedom of opinion, the liberty to express your judgement on the current status of affairs in your country.

It is unclear how criticism and divergent opinions are continuously seen as such a lethal arms that can put at risk the survival of nations but this is what is happening almost on daily basis.

For example, while Dubai is celebrating its mesmerizing Expo, the U.A.E. are still jailing human rights defender Ahmed Mansoor detained since March 2017.

Whatever the charges against him, the authorities are showing contempt for the most basic human rights and this is not just an isolated episode but rather a consistent pattern of abuses.

Undoubtedly, it can be certainly be better in relation to basic human rights and that’s why the Summit for Democracy could become an opportunity to press nations like the U.A.E. to show leadership rather than fear and insecurity in matter of democracy and human rights.

The U.A.E. like many other authoritarian or totalitarian regimes are a success stories in so many extents.
Events like the Expo or the upcoming World Cup in Qatar, another democratic outcast despite the recent election of the Shura Council or the soon to happen Winter Olympics and Paralympics Games in China, are showing how such countries have found their own path to excellence and prosperity.

There are risks associated with a nation like the USA pushing the democracy agenda but still the follow up summit that will be organized by the Biden Administration in 2022 could offer a way for more nations to step up and show some commitment at least to human rights.

Will those nations who did not get invited to the summit this year, nations like the U.A.E. and Qatar do more in this area or simply will they carry on with business with a “business as usual” approach?

To be clear, there is no doubt that it would be a mistake to just promote the liberal democratic model based on elections and representation as the only blue print to be followed universally.

There are, indeed, other ways to reinvigorate democracy and human rights and for example, the ongoing conversation on the New Social Contract being promoted by the United Nations could offer such venue to rethink the relationships between people and their governments.

That’s why it is so relevant to be as inclusive as possible in building on the momentum opened by the UN Secretary General with its push for a New Social Contract because such discussions could enable nations like the U.A.E. to also join and contribute, on their own ways, to the formulation of a better and just, not just more efficient, governance models.

Involving youth is going to be paramount.

Recently during the World Youth Forum organized by the Egyptian Government, another nation falling well behind in human right standards and practices, Secretary General Guterres, invited youth to “keeping speaking out”.

I am not entirely sure how such invite would be digested by President El-Sisi, the convener of the Forum but Guterres is right in asserting youth’s right to speak up and share their voice.

More than ever, the United Nations have an enormous responsibility to keep focusing on human rights and freedom of expression and such an effort can help move forward, even indirectly, the global agenda being embraced by President Biden.

And such leaders from states like U.A.E., Saudi Arabia, Brunei, China or Nicaragua, just to mention few nations certainly not trailblazers in human rights, should not only listen to but also get engaged with such issues.

Will Biden tactically find a way to allow the United Nations, with its proclaimed neutrality, to be involved in such difficult conversations?

Human rights abused cannot be condoned anywhere and this is also a standard applicable to everyone, including to those states who proudly burnish strong democratic credentials, for example, nations of the E.U. or the U.S.A. itself.

We hope that one day not too far from today, the U.A.E. and other likeminded nations might be able to tell their own success stories in terms of human rights protection and people’s participation to local affairs.

They do not lack the creativity and resources to find their own solutions that, while meeting the highest human rights standards, at the same time, can be localized enough to offer novel ideas to make their societies more inclusive, more open and just.

After all, a social contract just based on economic prosperity, while doing the job now, won’t go too far nor will be resilient enough to navigate future crises.

Simone Galimberti is the Co-Founder of ENGAGE, an NGO partnering with youths living with disabilities. The opinions expressed here are personal.