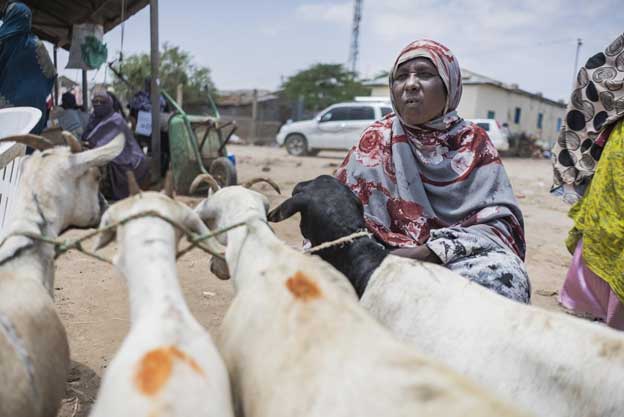 MOGADISHU, Somalia, Jan 18 2022 (IPS) - I arrived in Somalia in September 2019, two decades after having worked here previously. I knew that I was taking up a challenging assignment, but I was also looking forward to seeing Somalia’s progress.

Afflicted by decades of conflict, recurrent climatic shocks, disease outbreaks and poverty, Somalia was often called a ‘failed state.’ The narrative is now changing, and although fragile, Somalia is on a path to stability and the resilience of the Somali people is second to none.

That said, we are not under any illusion: significant challenges remain, and we must work even harder to preserve the gains made to date.

Somalia’s upward trajectory is evident in the construction boom, as one analyst noted — the sound of the hammer is replacing the sound of gunfire in Somalia’s capital.

The UN has been closely supporting the Somali people since the birth of the Republic in 1960. Currently, the UN’s various mandates are implemented through 26  Agencies, Funds and Programmes (both resident and non-resident), one political mission (UNSOM) and one logistical support mission (UNSOS).

The UN’s commitment towards the Somali cause is articulated in detail in the UN Sustainable Development Cooperation Framework (UNSDCF 2021-2025), mirroring the priorities of Somalia’s Ninth National Development Plan (NDP-9).

At the height of the COVID-19 pandemic, the UN marshalled support to help the Somali government respond to the virus outbreak. We continue to support the Somali authorities in seeking to defeat this pandemic and encouraging people to get vaccinated.

Elections are also on-going in Somalia. The UN is supporting the process to ensure that elections are held in a peaceful and transparent manner, while at the same time advocating for 30 per cent women’s quota in the Somali legislature.

While these are encouraging signs of progress, we must not forget Somalia’s long-standing challenges. According to UN’s projections for next year, an estimated 7.7 million Somalis (nearly half of the country’s population) will require humanitarian assistance and protection.

Women and children continue to bear the brunt of Somalia’s complex humanitarian crises, especially among the internally displaced communities. In light of the current serious droughts, the Somali government declared a humanitarian state of emergency on 23 November.

Yet, neither the government nor the humanitarian community has adequate resources to respond. With a few days remaining in the year, the 2021 Humanitarian Response Plan which seeks US$1.09 billion remains only 70 per cent funded. Additional resources are urgently needed to prevent the dire humanitarian situation from becoming a catastrophe, so we continue to engage partners on this subject.

In this regard, I undertook missions to Europe in October and to the Gulf in September. Throughout my interactions with partners, I stressed the need for additional funding to address Somalia’s escalating humanitarian crisis and elaborated on how inaction not only risks a reversal of the gains but puts the lives of millions of Somalis in jeopardy.

Through my field visits in Somalia, I have also seen first-hand the grim realities of adverse climate conditions. Somalia is no doubt on the frontline of climate change. The recurrent droughts and floods are driving widespread displacement, rapid urbanization, hunger, malnutrition and poverty.

Climate change is also increasingly seen as the driver of conflict and a threat to the country’s security as the struggle over meagre resources deepens divisions. In addition, the loss of traditional livelihoods makes people vulnerable to recruitment by armed groups such as Al-Shabaab.

Somalia is currently experiencing a third consecutive season of below-average rainfall, with nearly 80 per cent of the country experiencing drought conditions, water shortages and livestock deaths. One in five Somalis does not have enough water to cover his/her basic needs.

On a positive note, as part of the efforts to mitigate the climate emergency, the government, with the support of the United Nations, has recently adopted an ambitious Nationally Determined Contribution to achieve global climate targets, in which Somalia committed to reduce its greenhouse gas emissions by 30 per cent by 2030.

Somalia’s crises are multifaceted, and they require comprehensive solutions from all stakeholders. It is our collective responsibility to support the efforts of the Somali people to cope with these crises and find lasting solutions that build resilience against future shocks. We must not fail the people we pledged to serve.

Adam Abdelmoula is Deputy Special Representative of the UN Secretary-General, Resident and Humanitarian Coordinator for Somalia. He told a press conference in December that the UN and its partners have launched a nearly $1.5 billion Humanitarian Response Plan (HRP). Roughly 7.7 million people in the country will need assistance and protection in 2022, a 30 per cent rise in just one year.