While most health care workers in the wealthy world were vaccinated early in 2021, only a quarter of Africa’s health workers had received their Covid-19 jabs at the end of last year. Credit: UNICEF/Nahom Tesfaye

NEW YORK, Feb 16 2022 (IPS) - Efforts to combat the vast global inequity in access to Covid-19 vaccines just got a boost. A Cape Town company claims it successfully made a vaccine that mimics Moderna’s messenger RNA vaccine—without any help from Moderna. This copycat will still need to undergo clinical trials, but the effort could yield Africa’s first Covid-19 vaccine.

So far, African factories have been cut out of the effort to manufacture Covid-19 vaccines and largely limited to filling and labelling bottles with the drug substance manufactured elsewhere. As a result, when vaccines were in short supply globally, Africans were forced to wait. When they did arrive, vaccines were often dumped on overburdened public health systems with very short notice, in some cases, close to their expiration date.

Strive Masiyiwa, the African Union Special Envoy to the African Vaccine Acquisition Task Team and a prominent businessman, described his experience seeking to buy vaccines on behalf of the continent, “I met all the manufacturers in December (2020), and said, we would like to buy some vaccines. We had money, we were willing to pay up front in cash. We were not asking for donations, and they said all capacity for 2021 has been sold…. the people who bought the vaccines knew there would be nothing (left) for us.” 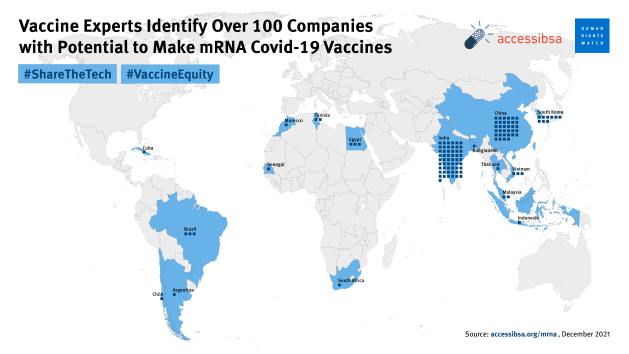 To date, 10 billion doses of Covid-19 vaccines have been administered globally, including up to four doses per person in some places. But in the world’s least developed countries, just 10 percent of people have accessed even a single dose.

While most health care workers in the wealthy world were vaccinated early in 2021, a study by the World Health Organization found that only a quarter of Africa’s health workers had received their Covid-19 jabs at the end of last year. In the Democratic Republic of the Congo and Chad, even today, less than 1 percent of the population is vaccinated.

To date, 10 billion doses of Covid-19 vaccines have been administered globally, including up to four doses per person in some places. But in the world’s least developed countries, just 10 percent of people have accessed even a single dose

The South African company working on the copycat, Afrigen Biologics and Vaccines, hopes to shift these dynamics by building greater manufacturing capacity on the continent. If all goes to plan, Afrigen will begin its clinical trials in 2023. That’s still a long way off. It’s worth noting that experts agree, it didn’t have to be this way. If Afrigen had been able to get a technology transfer, it says, it could have produced a vaccine suitable for trials months ago.

If, for example, the United States and German governments had used their influence to press Moderna, Pfizer and BioNTech to share their Covid-19 vaccine recipes and know-how, Afrigen and a lot of other potential manufacturers in Africa, Latin America and Asia would have already been able to join the global effort to make enough doses for everyone, everywhere.

But when Human Rights Watch asked Moderna about its approach to technology transfers more broadly, representatives replied that the company was “not aware of any idle mRNA manufacturing capacity,” and that transferring their technology “requires significant time from a limited pool of experienced personnel with the requisite expertise.”

Instead, Moderna has promised “investment in a state-of-the-art mRNA manufacturing facility in Africa,” of its own which it claims will eventually manufacture up to 500 million doses annually, estimating three years to get a plant up and running.

In contrast, Afrigen hopes to eventually transfer the skills and technology for its vaccine to factories across Africa and even train companies in Argentina and Brazil too. Experts have already identified over 100 facilities that could be manufacturing mRNA vaccines right now. Eight of them are on the African continent

Moderna has yet to comment on Afrigen’s breakthrough. The WHO technology transfer hub catalyzing the effort does not intend to “infringe” on patents. For their part, Afrigen’s managing director has said, “this is not Moderna’s vaccine, it is the Afrigen mRNA hub vaccine.”

They also point to a commitment from Moderna that it will not enforce its Covid-19 related patents against those making vaccines intended to combat the pandemic. But MSF Access Campaign has expressed concerns that Moderna retains the right to decide when it thinks the pandemic is over and its patent enforcement will resume.

Afrigen’s leap forward comes amid renewed attention to India and South Africa’s plea to waive some intellectual property rights until everyone everywhere has access to vaccines. The African Union has thrown its weight behind the proposal and the Biden administration backed the idea, at least for vaccines, in 2021.

Talks remain stalled at the World Trade Organization due to short-sighted opposition from the European Union. If a waiver is adopted this month, as some diplomats hope, it could help shield Afrigen’s vaccine, and make it easier to make more of the Covid-19 treatments, tests and vaccines that we all need.

Afrigen’s success spotlights a failure of global solidarity. Africa’s scientists shouldn’t have to go it alone. Companies behind the name brand Covid-19 vaccines, Pfizer, Moderna and BioNTech should share their technology more widely, or governments will need to make it happen.