With One Million Species Endangered, the Web of Life Is at Risk of Extinction 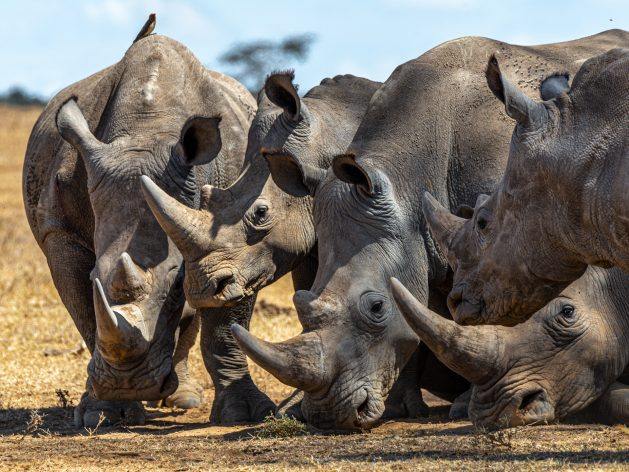 Illegal wildlife trade continues to pose a real danger to biodiversity, ecosystems and human health, as a number of emerging diseases stem from animal products, both domestic and wild. Credit: AWF wildlife archive

MADRID, Mar 2 2022 (IPS) - These are not by any means just mere figures. It is about the risk of extinction of the whole life cycle. See what is at stake.

Right now, one million wild plant and animal species are facing extinction. And three-quarters of the land-based environment, eighty-five percent of wetlands, and two-thirds of oceans have been significantly and negatively altered by human activity.

The shocking warning comes from the United Nations, which revealed these facts on the occasion of the World Wildlife Day, marked 3 March.

Humanity depends on the essential products and services that nature provides, from food and fresh water to pollution control and carbon storage. By damaging the natural world, we threaten our own well-being

Moreover, the world body reports that over 8.400 species of wild fauna and flora are “critically endangered,” while close to 30.000 more are understood to be “endangered or vulnerable.”

“Today, all around the world, wildlife is in peril. A quarter of species face the threat of extinction, in large part because we have destroyed nearly half of the ecosystems in which they live,” said the UN Secretary-General, António Guterres.

“Why do we care about wildlife? Beyond a moral duty to sustain the Earth, humanity depends on the essential products and services that nature provides, from food and fresh water to pollution control and carbon storage. By damaging the natural world, we threaten our own well-being.”

The animals and plants that live in the wild have an intrinsic value and contribute to the ecological, genetic, social, economic, scientific, educational, cultural, recreational and aesthetic aspects of human well-being and to sustainable development, the UN underlines.

“The world is dealing with unprecedented threats to wildlife. Illegal wildlife trade continues to pose a real danger to biodiversity, ecosystems and human health, as a number of emerging diseases stem from animal products, both domestic and wild.”

Humanity as a whole, threatened

For its part, the International Union for Conservation of Nature (IUCN) said that continued loss of species and degradation of habitats and ecosystems threatens humanity as a whole, as people everywhere rely on wildlife and biodiversity-based resources to meet all their needs, from food, medicines and health to fuel, housing, and clothing.

And Ivonne Higuero, the secretary general of the Convention on International Trade in Endangered Species of Wild Fauna and Flora (CITES) last November said that “Biodiversity loss is an existential threat to people and the planet. The continued loss of wildlife species threatens to undermine entire ecosystems and puts into peril the well-being of all who rely on them…”

Clearly, the growing intensive and extensive human activities are among the main causes of the loss of wildlife.

On this, says the UN that “climate change, man-made changes to nature as well as crimes that disrupt biodiversity, such as deforestation, land-use change, intensified agriculture and livestock production or the growing illegal wildlife trade, can increase contact and the transmission of infectious diseases from animals to humans (zoonotic diseases) like COVID-19.”

Concurrently, Marie Bout, a Global Communications Strategist with the Greenpeace International Political Unit, on 3 March 2021 reported that just 15% of the world’s forests remain intact, and only 3% of the world’s oceans are free from human pressures.

“The Planet is losing species – its biodiversity – at an alarming rate, thought to be comparable only to the 5th mass extinction 65 million years ago.”

What is biodiversity and why is it important?

But whenever a species disappears it’s like a thread in the web that is cut, leaving holes in the planet’s safety net and shifting the finely balanced systems, she warns.

“That’s exactly what’s happening on Australia’s Great Barrier reef, one of the world’s most diverse reef ecosystems, which has lost more than half of its coral population since 1995 due to mass coral bleaching events and is dying before our eyes.”

According to Marie Bout’s report:

Greenpeace’s Marie Bout went further saying that as societies (and economies) have grown, so has their ecological footprint.

“Extractive capitalism has commodified nature, and caused some to forget its true value. The pursuit of limitless economic growth is a huge source of injustice, exploiting people and the planet alike, Bout adds.

“Destructive industries are piling more pressure on our planet’s web of life than at any other point in human history. Mega corporations are burning polluting fossil fuels, are setting forests on fire to clear land to grow agricultural commodities and for single use products, and are plundering ever deeper and more remote areas of the oceans, they’re also polluting politics and holding our governments hostage in the process.”

“Rather than working on a solution, governments are propping up the problem. Bailing out pesticide giants and destructive industrial farming with public money, or pumping billions into dirty energy.”

“Endless pursuit of limitless growth, on a planet with finite resources, has a predictable end that’s already in sight. So much of the wildlife on this planet, including humanity most likely, is heading for extinction.”