Palm Oil for Biodiesel in the Amazon: Sustainable Fuel or Deforestation Risk?

Brasil Biofuels' biodiesel plant in Envira, Amazonas state. The company foresees investments of 1.8 billion reals in a biorefinery in Manaus that will begin production in 2025 (Image: Brasil BioFuels)

MANAUS, Brazil, Apr 4 2022 (IPS) - Oil palm, known as dendezeiro in Brazil, can produce up to ten times more vegetable oil per hectare than other crops, but it is regularly condemned as harmful to the biodiversity of tropical forests in Asia, Africa and Latin America. Now, its cultivation looks set to advance in the Brazilian Amazon.

In December, Brasil BioFuels (BBF) and Vibra Energia – the country’s largest distributor of biofuels – announced plans to build a biorefinery for “green diesel” in Manaus, the capital city of Amazonas state. Produced from soybean and/or palm oil, the fuel is seen by many as desirable for low-carbon futures, as it is less polluting than fossil-based diesel.

“This is the crop with the most devastating potential in the world being implemented in the heart of the world’s largest tropical forest,”

Lucas Ferrante, researcher at the National Institute for Amazonian Research

The refinery is currently in the study phase, and is still without an environmental license or deadline to start construction. But with planned investments of 1.8 billion reais (US$378 million) and a start of operations in 2025, the venture could produce up to 500 million litres of diesel per year.

To reach this volume of production, BBF plans to plant 120,000 hectares of oil palm by 2026, in areas yet to be defined. This would increase the area devoted to oil palm in Brazil by about 60%, with the crop used in a variety of consumer products already occupying 201,000 hectares in the country, according to data from the Brazilian Institute of Geography and Statistics (IBGE).

Brazilian law states that oil palm should only be cultivated in areas that were deforested before 2007. BBF’s president, Milton Steagall has assured that the crop already follows these sustainable standards, and also contributes to carbon sequestration in previously degraded areas.

“Oil palm does not occupy forest space. We are talking about areas that were ‘anthropised’ before 2007, and which would be difficult to recover, because frequently they have already turned into pasture,” Steagall told Diálogo Chino. “We take degraded areas and make a perennial crop, which is not mechanised, does not require much fertiliser, and produces for 35 years.”

Steagall added that the refinery will help to power 20 thermoelectric plants in operation and another 14 being planned in the Amazon. For this reason, he said, it will be vital to offer a source of clean energy to the region’s thermoelectric plants, which currently operate with fossil diesel.

However, researchers and environmentalists have criticised the expansion of infrastructure for the production of palm oil in the Amazon.

“This is the crop with the most devastating potential in the world being implemented in the heart of the world’s largest tropical forest,” said Lucas Ferrante, a researcher at the National Institute for Amazonian Research (INPA). He described oil palm as “a proven predatory crop, which causes enormous loss of biodiversity”.

There are multiple impacts that the advance of oil palm plantations can have on tropical forests – which have mainly been seen in the palm hotspot of Southeast Asia, where habitat loss has put at least 193 species at risk of extinction. And according to the Union of Concerned Scientists, only 15% of species that inhabit tropical forests can survive in oil palm plantations.

Palm oil in Brazil goes against the world

In 2010, the Brazilian government launched the Sustainable Palm Oil Production Programme with the expectation of leveraging Brazilian production and developing in the Amazon region, but the programme has not taken off. Less than 3% of Brazil’s biodiesel today comes from oil palm, according to the National Petroleum Agency.

From soaps to margarine and biofuels, palm oil is used in almost everything, including in the generation of the electrical energy we use. It is the world's most widely used oilseed product

Even though more than 90% of the crop’s planting is in the states of the Amazon, it has not brought the expected benefits to the region, partly due to the weak action of environmental agencies, says Carlos Rittl, a specialist in public policies from the Rainforest Foundation.

“There is no way to fulfil the commitment of only producing in an already deforested area without governance, without control and without enforcement of environmental laws,” says Rittl, reinforcing that, even though oil palm contributes to sequestering carbon by replacing degraded pastures, it stimulates new deforestation. “Oil palm is pressuring cattle ranching into new areas of native forest,” he adds.

This is occuring, Rittl recalls, amid the ongoing dismantling of environmental protection agencies in Brazil and successive record years for deforestation and invasions of protected areas. Between 2019 to 2021, the average annual deforestation in the Amazon was 56.6% higher than the 2016 to 2018 period.

Although palm oil has little share in Brazil’s fuel matrix and it is not even self-sufficient in that it requires imported oil. Cultivation of oil palm has almost doubled in the last decade in the country, according to IBGE, driven by fiscal stimuli that helped attract agribusinesses to the Amazon.

But while Brazil invests in oil palm to target biofuel and energy markets, growing international pressures are leading two major buyers – Europe and the United States – to discuss import barriers.

The EU also hopes to eliminate palm oil-based fuels by 2030 – five years after the Brazilian refinery goes into operation – while Germany has announced the end of the use of palm oil for the production of biofuels as of 2023.

In China, there are discussions aimed at reducing the import of palm oil without certification, says Rittl. The certification body, the Roundtable on Sustainable Palm Oil (RSPO), has been working to reduce the environmental impact of the country’s procurement, as it is also a major importer.

“If we have an expansion of production in Brazil beyond domestic use, there will soon be no room in the market,” says Rittl. 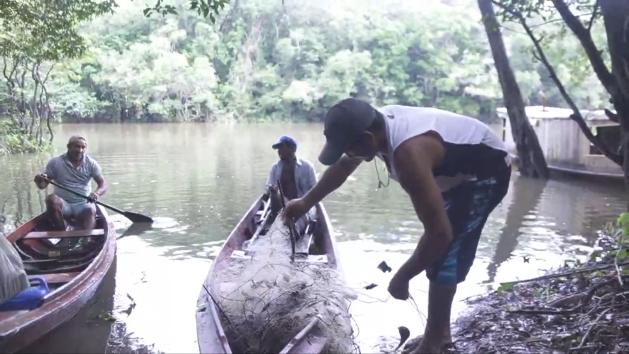 The advance of palm oil has already had negative impacts on traditional communities in the Amazon, according to André Carvalho, a professor at the Federal University of Pará (UFPA). “Studies confirm the almost complete loss of character of the way of life in the region, food insecurity, besides the expropriation of land and violence in the field, including murders,” he told Diálogo Chino.

This is the case for Acará, a municipality in the northeast of Pará state, where Afro-Brazilian quilombola communities claim an area from which they say they were expropriated by Agropalma, a palm oil producer with RSPO certification.

José Joaquim Pimenta, president of the association that brings together six quilombola communities, said that the expropriation occurred more than three decades ago. At first, Agropalma’s expansion occurred “on a small scale”, Pimenta says, through land purchase. But starting in 1987, the company acquired a farm and went beyond the limits of the property.

Pimenta says the company “invaded traditional territories, initiating grilagem [land grabbing]. Between 1987 and 1990, it cut down a very large natural reserve area to plant oil palm.” In 2015, the legal fight to return to these areas began.

In 2018, the Federal Court suspended the registration of two Agropalma farms on suspicion of illegal occupation, falsification of documents and notary fraud, following a request from the State Public Ministry of Pará (MPE-PA).

Agropalma argued that the lands were “acquired in good faith”. After the Federal Court confirmed the irregularities, the company said it “did not oppose the court decision to cancel the registrations” and is waiting for the land title to be regularised.

However, even with the registrations suspended, Agropalma continues to occupy the area, and conflicts with the quilombolas have been intensifying. “Recently, we have been prevented by Agropalma from accessing part of the forest, stretches of the Acará river where we used to fish, and even cemeteries where our ancestors are found,” says Pimenta.

In February, the restrictions “almost led to a confrontation” against armed Agropalma security guards, Pimenta says. At the time, quilombolas were camping in the disputed area as a protest against the company’s failure to comply with a recommendation by the MPE-PA to allow access to the site. Human rights organisations have been trying to mediate the dialogue between them. 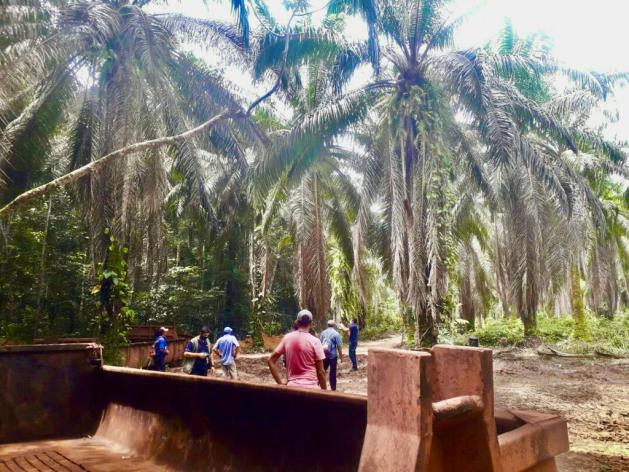 Quilombola communities are resisting the encroachment of oil palm plantations onto their territories (Image: Joaquim Pimenta)

Oil palm already brings harmful consequences to biodiversity in the Amazon. Alexander Lees, a researcher at Manchester Metropolitan University, is one of the authors of a paper warning of the loss of bird habitat in the municipalities of Moju and Tailândia, in northeast Pará, where there are extensive oil palm plantations.

“Oil palm is an extremely predatory crop for Amazonian biodiversity,” Lees told Diálogo Chino. “While in primary forest, we easily find more than 300 species of birds, in the midst of oil palm this number is around 20. It is even lower than in pastures.”

Incompatible with family-based agriculture, the palm also ends up competing with subsistence crops such as cassava, an important source of income for small farmers, according to Auristela Castro, researcher at the Federal University of West Pará. She explains that oil palm generates “an atmosphere of uncertainties and threats” to the quality of life of small farmers.

Asked about the environmental impacts and the intensifying land disputes related to palm oil, Steagall replied that the company seeks to “respect the rules and plant only within the zoning areas [intended for oil palm]”.

Despite palm oil’s high yield per hectare, and even though it guarantees a cleaner fuel than those from fossil sources, Lees believes that the best way forward is to reduce its demand in the market. “Exchanging fossil fuels for biodiesel in thermoelectric plants and cars is very good, but even better would be to replace thermoelectric plants for solar and wind energy, replace cars for bicycles and electric buses,” he says.

The researcher adds that replacing palm oil for others derived from vegetables would not solve the deforestation problem. This is because the production of a tonne of palm oil requires 0.26 hectares of land. Though this is less than for soybean oil, for example, which demands at least two hectares, according to a WWF survey, it is not insignificant.

Carlos Rittl agrees that it is necessary to prioritise renewable sources over thermoelectric plants, currently the main end use of palm oil from the Amazon. For him, photovoltaic energy is the best bet for Brazil: “In 2025, it will be the cheapest energy in the world.”