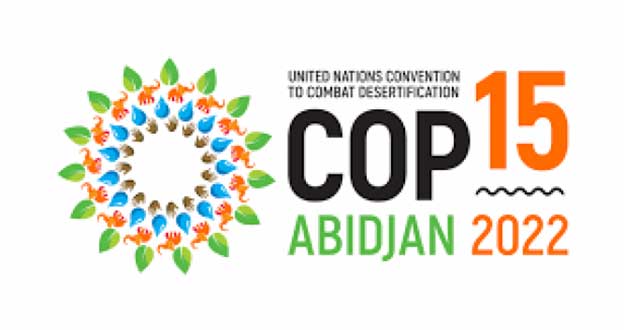 The 15th session of the Conference of Parties (COP15) to the United Nations Convention to Combat Desertification (UNCCD), is taking place in Abidjan Côte d’Ivoire, from 9 to 20 May 2022. The theme: “Land, Life. Legacy: From scarcity to prosperity.” “We are faced with a crucial choice,” Deputy Secretary-General Amina Mohammed told participants: “We can either reap the benefits of land restoration now or continue on the disastrous path that has led us to the triple planetary crisis of climate, biodiversity and pollution”

BERLIN, May 16 2022 (IPS) - The landmark land tenure decision by parties to the UN Convention to Combat Desertification (UNCCD) in 2019 offers a blueprint for upcoming climate negotiations in Sharm El Sheikh in November.

The ongoing UNCCD COP15 conference in Abidjan (May 9-20) is taking necessary next steps to guide countries on how to embed land rights within national implementation processes.

As the first of the three Rio Conventions (addressing climate, biodiversity and desertification respectively) to explicitly refer to land tenure as a critical enabler for the transition to more sustainable pathways, this meeting could advance the landmark land tenure decision by proposing guidelines to safeguard legitimate land rights, argues Berlin-based think tank TMG Research.

According to the UNCCD’s recently published Global Land Outlook, roughly $44 trillion of economic output (more than half of global GDP) is moderately or highly reliant on natural capital.

Yet this natural resource base is under intense pressure from changing land use patterns and the accelerated impacts of climate change. This already has huge consequences for the poorest and most vulnerable communities, who depend on natural resources for their survival, and even more people will be affected as natural capital dwindles.

But such initiatives need to account for all existing legitimate tenure rights for Indigenous Peoples, smallholder farmers and pastoralists, women and youth, and other vulnerable groups.

Otherwise, restoration efforts and especially large-scale investments will lead to new conflicts, violating the rights of people and risking the success of the planned measure.

The UNCCD is the first of the three ‘Rio Conventions’ to explicitly recognize the importance of safeguarding all forms of legitimate land tenure – especially for women, youth, Indigenous communities, and smallholder farmers and pastoralists – as a prerequisite for the sustainable management of land and other natural resources.

But with land governance enacted at the national and sub-national levels, how can this progressive decision at the global level translate into a governance environment that promotes good land stewardship by strengthening the land rights of vulnerable groups at the local level?

As noted by the Global Land Outlook, “land is the operative link between biodiversity loss and climate change,” but to deliver on global aspirations, restoration must take place “in the right places and at the right scales.”

We therefore welcome the decision to devote a ministerial roundtable at COP15 to the theme of “Rights, Rewards and Responsibilities – the future of land stewardship” and invite TMG to deliver the keynote address.

The relationship between a decision on principles of good governance at global level and action on the ground must acknowledge that “all land stewardship is local.” This means that “localizing” the global land tenure decision requires analyzing the concrete situation on the ground, respecting people’s rights and strengthening the ability of local communities to protect their rights and become actively involved in restoration processes.

This approach is particularly critical for the implementation of global efforts to achieve carbon neutrality and afforestation for carbon offsetting purposes.

Our work with national partners in four African countries points to how the link between legitimate tenure rights and restoration can be made. National governments must incorporate land rights as a starting point in developing restoration agendas, including their UNCCD targets to achieve land degradation neutrality.

We welcome the strong statements made by many countries at the session and the commitment of multilateral agencies to support countries in more explicitly linking land governance and policies to reverse land degradation, desertification and drought. At its heart, this calls for “changing mindsets towards land tenure,” as FAO’s Maria Helena Semedo noted.

The Voluntary Guidelines on the Responsible Governance of Tenure of Land, Fisheries and Forests (VGGT) were designed to do exactly this. Adopted exactly 10 years ago by the Committee on World Food Security (CFS), the VGGT are “true connectors” of work across the three Rio Conventions, in the words of CFS Vice Chair Gabriel Ferrero de Loma-Osorio.

The UNCCD/FAO Technical Guide on implementing the land tenure decision in the context of the VGGT, which TMG helped develop, explains how to reinforce actions at the sub-national and local levels by building on efforts by communities and civil society organizations.

Our ongoing partnership with four African governments shows how responsible land governance can be meaningfully realized from the ground up.

Explore the Human Rights & Land Navigator, launched at UNCCD’s COP15, on May 12th in Abidjan, Côte d’Ivoire. This tool was developed by TMG Research, the Danish Institute for Human Rights and the Malawi Human Rights Commission, with the support of the German Federal Ministry for Economic Cooperation and Development (BMZ).