Community organizing is a lynchpin in the lives of environmental defenders in Peru, as in the case of Mirtha Villanueva, pictured here with other activists from the Cajamarca region also involved in the defense of rivers and Mother Earth. CREDIT: Courtesy of Mirtha Villanueva

LIMA, May 30 2022 (IPS) - “Water is part of our culture, it is intrinsic to the Amazon,” said José Manuyama, a member of a river defense committee in his native Requena, a town located in the department of Loreto, the largest in Peru, covering 28 percent of the national territory.

Despite the large size of this Amazon rainforest department or province located in the northeast of the country, data from 2020 indicated that it barely exceeded one million inhabitants, including some 220,000 indigenous people, in a country with a total population of 32.7 million.

A teacher by profession and a member of the Kukama indigenous people, one of the 51 officially recognized in Peru’s Amazon rainforest region, Manuyama reminisced about his childhood near a small river in a conversation with IPS during the Second Interregional Meeting of Defenders of Rivers and Territories, held in Lima on May 25.

“We would wait for the high water season and the floods, because that was our world. When the water comes, it’s used for bathing, for fishing, it’s a whole world adapted to water,” he said.

And he added: “We also waited for the floods to pass, which left us enormous areas of land where the forest would grow and where my mother would plant her cucumbers, her corn. Seeing the river, the transparent water, that beautiful, fertile world: that’s where I grew up.”

Today, approaching the age of 50, Manuyama is also an activist in defense of nature and rivers in the face of continuous aggressions from extractive economic activities that threaten the different forms of life in his home region.

Manuyama is a member of a collective in defense of the Nanay River that runs through the department of Loreto. It is one of the tributaries of the Amazon River that originates in the Andes highlands in southern Peru and which is considered the longest and the biggest in terms of volume in the world, running through eight South American countries.

“We started out as the Water Defense Committee in 2012 when the Nanay watershed was threatened by oil activity,” he said. “Together with other collectives and organizations we managed to block that initiative, but since 2018 there has been a second extractive industry wave, with mining that is damaging the basin and seems to be the latest brutal calamity in the Amazon.” 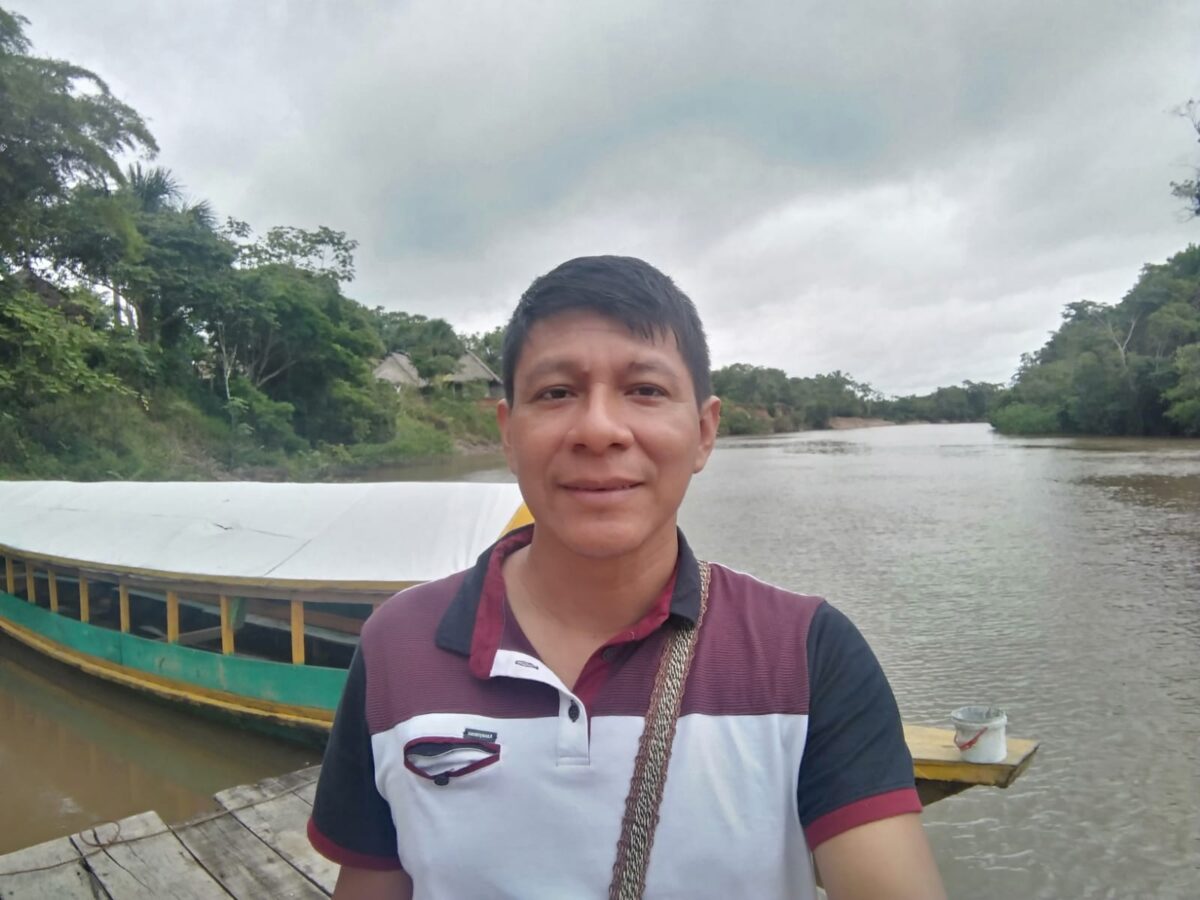 José Manuyama, a member of the Kukama indigenous people and a teacher committed to the protection of nature, stands in front of the Momón River, a tributary of the Nanay River, which environmental activists have been defending from extractive activities that threaten its very existence in the department of Loreto, in Peru’s Amazon jungle region. CREDIT: Courtesy of José Manuyama

Their struggle was weakened during the pandemic, when the “millionaire polluting illegal mining industry” – as he describes it – remained active. Their complaints have gone unheeded by the authorities despite the harmful impacts of the pollution, such as on people’s food, which depends to a large extent on the fish they catch.

However, he is hopeful about the new national network of defenders of rivers and territories, an effort that emerged in 2019 and that on May 25 organized its second national meeting in Lima, with the participation of 60 representatives from the Amazon, Andes and Pacific coast regions of the country.

“It is important because we strengthen ourselves in a common objective of defending territories and rights, confronting the various predatory extractive waves that exist in this dominant social economic system that uses different factors in a chain to achieve its purpose. The battle is not equal, but this is how resistance works,” Manuyama said.

Ricardo Jiménez, director of the non-governmental Peru Solidarity Forum, an institution that works with the network of organizations for the protection and defense of rivers, said it emerged as a response to the demand of various sectors in the face of depredation and expanding illegal mining and logging activities detrimental to water sources.

The convergence process began in 2019, he recalled, with the participation, among others, of the Amazonian Wampis and Awajún indigenous peoples, “women defenders of life and the Pachamama” of the northeastern Andes highlands department of Cajamarca, and “rondas campesinas” (rural social organizations) in various regions of the country. 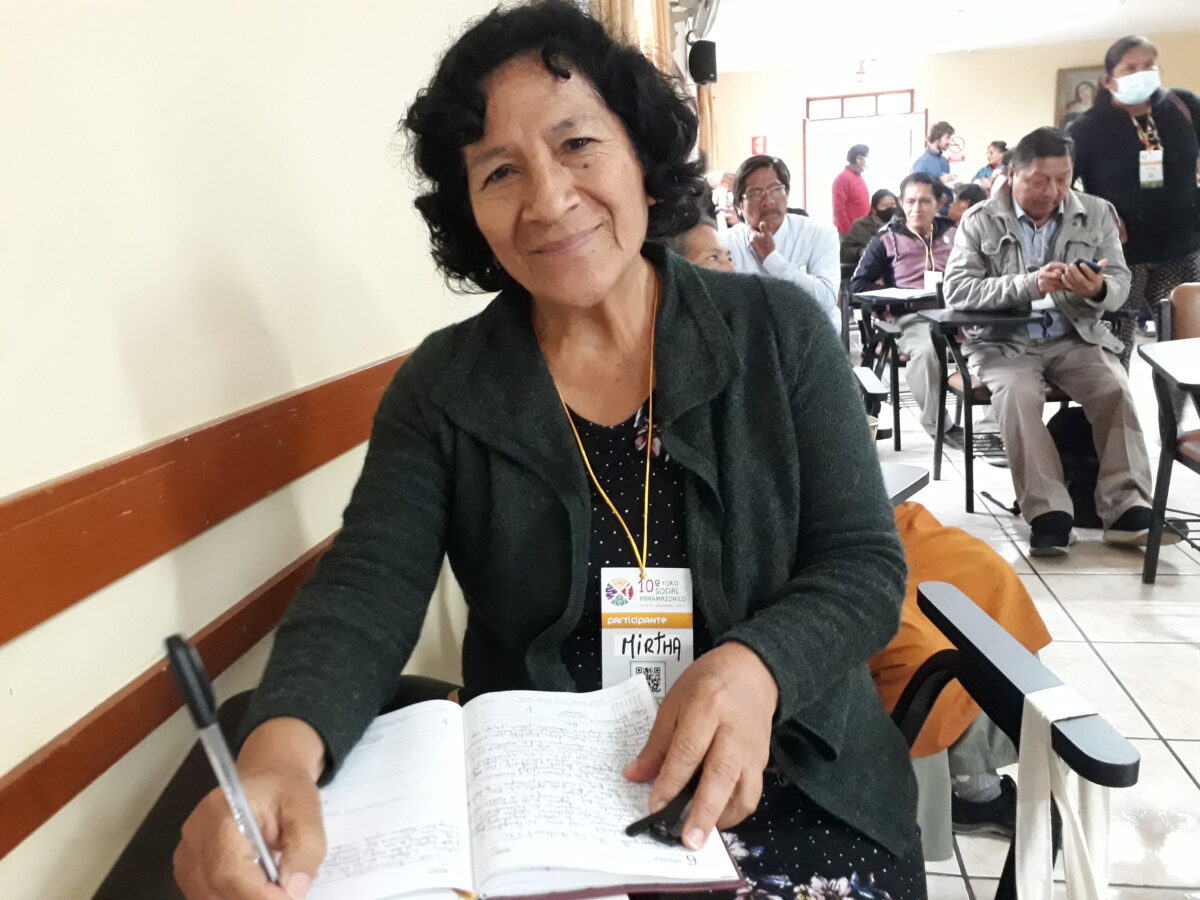 Mirtha Villanueva, defender of life and Pachamama in the Cajamarca region of northeastern Peru, is seen here participating in one of the sessions of the Second Interregional Meeting of Defenders of Rivers and Territories, which brought together 60 participants from different parts of the country. CREDIT: Mariela Jara/IPS

The first important milestone of the initiative occurred in 2021, when they held their first national meeting, in which a National Promotional Committee of Defenders of Rivers and Territories was formed.

They approved an agenda that they sent to the then minister of culture, Gisela Ortiz, who remained in office for only four months and was unable to meet the request to form the Multisectoral Roundtable for dialogue to address issues such as environmental remediation of legal and illegal extractive activities.

At this second national meeting, the Promotional Committee updated its agenda and created synergies with the National River Protection Network, made up of non-governmental organizations.

It also joined the river action initiative of the Pan-Amazonian Social Forum (Fospa), whose tenth edition will be held Jul. 28-31 in Belem do Pará, in Brazil’s Amazon region, and whose national chapter met on May 27.

Three days of activity were organized in the Peruvian capital by the defenders of the rivers and their riverside communities, who on May 26 participated in a march of indigenous peoples, organized by the Interethnic Association for the Development of the Peruvian Rainforest.

“There is a coming together of the social collectives at the national level and also with their peers at the Pan-Amazonian level; we have a shared path with particularities but which coincides,” Jiménez told IPS.

A group of villagers participates in the monitoring and surveillance of the Chimín river in the Condebamba valley, in the Cajamarca region of northeastern Peru. The river is contaminated by illegal mining activity, which harms all the communities along its banks, as it irrigates 40 percent of the crops in the area. CREDIT: Courtesy of Mirtha Villanueva

Rivers have no borders

Mirtha Villanueva is an activist who defends life and Pachamama (Mother Earth, in the Quechua indigenous language) in Cajamarca, a northeastern department of Peru, where more than a decade ago the slogan “water yes, gold no!” was coined as part of the struggles of the local population in defense of their lakes and wetlands against the Conga mining project of the U.S.-owned Yanacocha gold mine.

The project was suspended, but only temporarily, after years of social protests against the open-pit gold mine, which in 2012 caused several deaths and led to the declaration of a state of emergency in the region for several months, in one of the most critical episodes in the communities’ struggle against the impact of extractivism on their environment and their lives.

A large part of Villanueva’s 66 years has been dedicated to the defense of nature’s assets, of rivers, to guarantee decent lives for people, in a struggle that she knows is extremely unequal in the face of the economic power of the mining companies.

“We, the defenders of the rivers, have to grow in strength and I hope that at the Fospa Peru meeting we will approve a plan of action agreed with our brothers and sisters in Ecuador, Bolivia and Brazil, because our rivers are also connected, they have no borders,” she told IPS during an interview at the meeting in Lima.

“We need to strengthen ourselves from the local to the international level to have an impact with our actions. We receive 60 percent of our rainfall from the Amazon forest. How can we not take care of the Amazon?” she said. 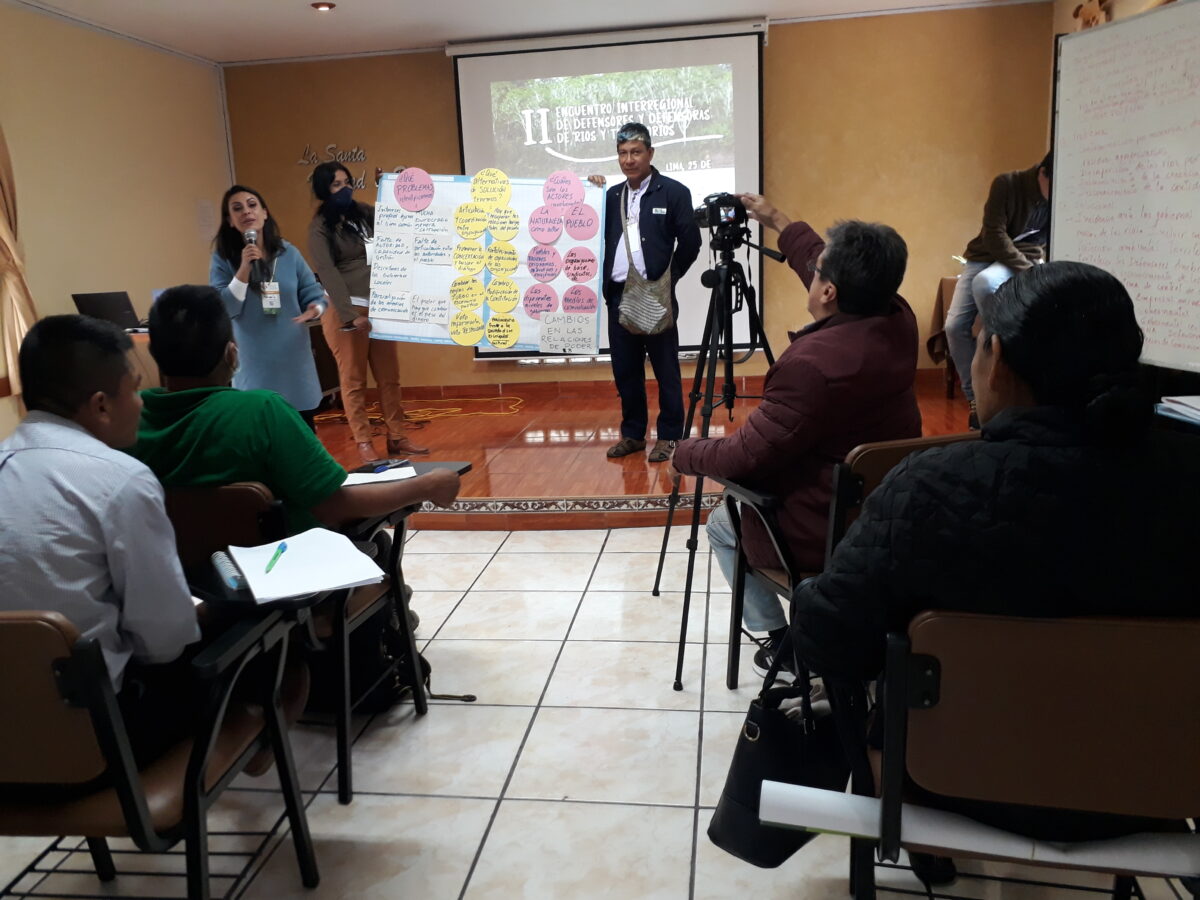 José Manuyama stands to the right of the poster during one of his presentations at the Second Interregional Meeting of Defenders of Rivers and Territories, which brought together activists from different parts of Peru in Lima. His group analyzed power relations in the context of the risks surrounding the country’s rivers, especially those in the Amazon rainforest. CREDIT: Mariela Jara/IPS

The work she carries out with the environmental committees is titanic. She recalled the image of poor rural families protesting the change in the rivers and how it has caused rashes on their children’s skin.

And when they went to the mine to complain, they were told: “When I came, your river was already like this. Why do you want to blame me? Prove it.”

“In this situation, the farmer remains silent, which is why it is important to work in the communities to promote oversight and monitoring of ecosystems and resources. We work with macroinvertebrates, beings present in the rivers that are indicators of clean or polluted waters, gradually training the population,” she explained.

This is an urgent task. She gave as an example the case of the district of Bambamarca, in Loreto, which has the highest number of mining environmental liabilities in the country: 1118. “Only one river is still alive, the Yaucán River,” Villanueva lamented.

She also mentioned the Condebamba valley, “with the second highest level of diversity in Peru,” and 40 percent of whose farmland is being irrigated by water from the Chimín river polluted by the mines.

“In Cajamarca we have 11 committees monitoring the state of the rivers, we all suffer reprisals, but we cannot stop doing what we do because people’s health and lives are at stake,” both present and future, she said.