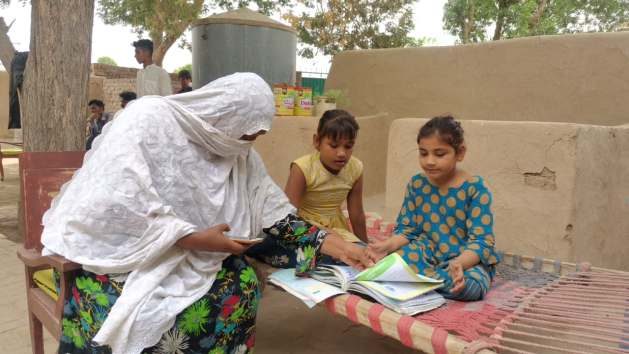 RAHIM YAR KHAN, Pakistan, Jul 12 2022 (IPS) - Villagers living with a desert at their doorstep in Pakistan’s eastern Punjab province are finding life more bountiful thanks to recent training on how to use their smartphones to buy, sell and gather information.

Agricultural entrepreneurs are bringing the digital age to these farm families, offering online applications and digital tools via the Internet of Things so they can work ‘smarter.’ For example, some apps deliver updated price information while others give access to tutorials on applying fertilizers or repairing equipment

Nadia Mujeeb, 30, who learned from the training how to access new makeup techniques from popular video websites, is now poised to open her own salon. “One of my friends told me about these websites that show new techniques for makeup. I started to practise on some of my relatives and after that worked I bought some basic tools and am ready to open my shop.”

Mujeeb, from another village on the outskirts of Rahim Yar Khan city, has also subscribed to many video channels to improve her English comprehension, which she says makes it easier to help her three children with their studies. “I even used an app once to guide a neighbour to contact a gynaecologist in Lahore for a maternal health issue,” she adds.

Located at the intersection of three provinces (Punjab, Sindh and Baluchistan), Rahim Yar Khan is the centre of this agricultural area, known as one of the country’s largest producers of cotton and sugarcane. Sixty-five percent of people living here work in agriculture as their core occupation.

Now, agricultural entrepreneurs are bringing the digital age to these farm families, offering online applications and digital tools via the Internet of Things so they can work ‘smarter.’ For example, some apps deliver updated price information while others give access to tutorials on applying fertilizers or repairing equipment.

Recently the UN Food and Agriculture Organization (FAO) Pakistan started offering training so that farmers and their families could take advantage of these digital offerings. After observing this in two villages in Rahim Yar Khan district, 800 kilometres south of the capital Islamabad, IPS traveled to other nearby communities close to the Desert of Cholistan (locally called Rohi), to meet men and women who had attended in-person and virtual sessions arranged by FAO in collaboration with local non-profit organizations.

Muhammad Iqbal on his tractor, which he repaired by following an instructional video online.. Credit: Irfan Ulhaq/IPS

Farmer Balam Raam says he was able to follow the new online pathways to a popular video website where he learned how to fix a broken tractor. “I repaired the faulty radiator of my tractor, which was much needed in the cotton sowing season and which also saved the cost of a mechanic,” he said in an interview.

Raam, 30, recently planted cotton on 51 hectares of land. He added that he’s now sharing his new knowledge about farm machinery with his fellow farmers, who are saving time working their fields because their equipment is in better repair.

A global initiative inspired by FAO’s Director-General, Mr QU Dongyu, the Digital Villages Initiative (DVI) is being piloted throughout the Asia-Pacific region. The villages here are among many being showcased and sharing their advancements with other villages and rural areas in Asia and the Pacific, as well as other regions of the world.

According to Muhammad Khan, FAO Project Lead in Pakistan for the 1,000 Digital Villages Initiative, “we have observed that the DVI is also attracting interest from different Internet start-ups as well as farmers, as they feel the DVI is helping them by raising the digital awareness of farmers.”

In some villages where the DVI provides training, internet connectivity via computer and mobile phones is sufficient. In others, the programme works with non-profits, donors and a Pakistan Government fund to install the infrastructure needed for connectivity.

Farmer Muhammad Iqbal, 32, says that although he’s been using a mobile phone since 2017, he was unaware of the various apps that could streamline his work. Today he buys seeds, fertilizers and pesticides online via his bank’s app. “I purchase these agriculture inputs online thereby saving travel expenses. Also, I am in contact with many agricultural product companies who offer me competitive rates, and because I am able to purchase the highest quality seed my per acre yield has increased.”

A farmer with his goats on the road near his village in Rahim Yar Khan district. Credit: Irfan Ulhaq/IPS

Naseem Bano has embarked on many ventures since being trained to use various cell phone apps. For instance, she is tutoring children in her village for free. She is also selling her embroidery to people in the area and is hoping to learn more skills online that will enable her to expand her business. One that she has already adopted is online banking, Bano adds in an interview.

Saif Ur Rehman, 35, is a farmer and runs an internet service provider in the same village. One of his aims in going online is getting the best price for his cotton crop. “I installed one application and started checking rates of crops in different agriculture markets in the region. Eventually I sold my cotton crop for 800 rupees per 40 kilograms as compared to 490 rupees per 40 kg at my local market.”

Like many of his neighbours, Shehzad Ali is a farmer who juggles other occupations. The holder of an engineering diploma, he runs a mini super store and uses a cell phone app to keep the business’ accounts. ”I recover the money from my customers and later pay my outstanding bills through this application,” he told IPS.