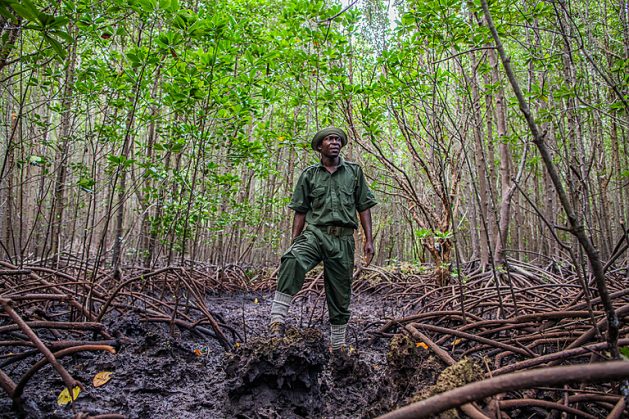 Shaban Mwinji, a community scout ranger, in Ukunda, Kenya. Standing in a restored Mangrove Forest by Mikoko Pamoja. Mikoko Pamoja is a community-led mangrove conservation and restoration project based in southern Kenya and the world's first blue carbon project. It aims to provide long-term incentives for mangrove protection and restoration through community involvement and benefit.

Toronto, Jul 4 2022 (IPS) - Africa’s unique natural capital assets were the center of conversation at the 2022 Africa Green Economy Conference. Held in a hybrid format from June 27 to 30, participants gathered to discuss the value of nature in Africa’s economy and call for more nature-positive ventures in development.

Participants stressed that the conference was coming at a unique moment in the face of several global economic shocks affecting Africa: climate change, biodiversity loss, and geopolitical challenges.

“The failure of the current system’s existing global cooperation mechanism to meet these challenges equitably and sustainably is leading to the current calls for the review of the global system,” moderator Kevin Urama, Acting Chief Economist and Vice President for Economic Governance and Knowledge Management, African Development Bank said.

Oliver Greenfield, Convenor, Green Economy Coalition, argued that the limited progress on environmental action resulted from policymakers’ continual emphasis on economic gains above all else.

“We accept that development is the priority and environment is the trade-off. That’s largely what’s happened for 50 years […] Avoidance of crisis is not the best investment model for most finance ministers, we know that,” he said.

Considering the environment alongside the economy would be very beneficial for Africa, stressed Dr Mao Amis, Co-founder and Executive Director of the African Center for Green Economy.

He added that in most African countries, natural capital accounts for 30-50 percent of their total wealth. In Sub-Saharan Africa, over 70 percent of people depend on forests and woodlands for their livelihoods.

Tapping into nature—and pursuing nature-positive investments—is seen as an avenue for wealth creation by policymakers.

“This is absolutely obvious, but it has perhaps not been invested in sufficiently. Africa has a tremendous amount of natural capital stocks both in minerals and biodiversity, and this can be a tremendous asset for the growth of Africa,” she said.

She added that natural capital could also create many green jobs for Africa’s population.

Multi-stakeholder engagement, however, is needed to center nature’s place in national economic development.

“Ultimately, without the companies being involved at all levels, there aren’t enough experts necessarily to have the skills to apply these tools. […] To really have a truly green economy, we have to have far better communication between the private sector, between [small medium enterprises], between environmental practitioners, and between policymakers,” she said.

The involvement of the finance sector, in particular, is crucial.

According to a presentation by the World Resources Institute, access to financing and the limited participation of the private sector are two of the biggest challenges to implementing nature-based solutions (NBS) in Africa.

Nature-based solutions are initiatives involving nature that solve societal challenges while building up natural ecosystems and biodiversity. For example, conserving mangrove forests can protect homes from the impacts of storms and provide nurseries for fish.

Marsters situated NBS as pivotal to incorporating sustainability and resilience into infrastructure investments.

“When we think about NBS, we think that there’s tremendous opportunity here to re-evaluate how we think about public budgets, how they are spent, and increased private sector participation,” Marsters said.

“Africa can and should take the lead on this … Africa’s culture has always been nature sensitive,” he said.

Natural capital ought to be intertwined in most development planning, he added.