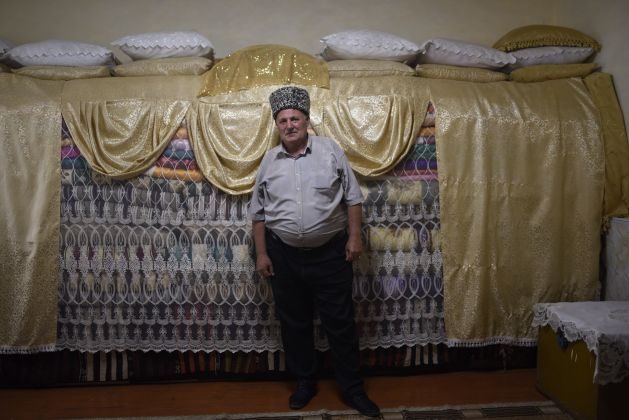 ARDASHAR, Armenia, Aug 23 2022 (IPS) - There are those cows watching the fight in the mud of rusty Soviet cars; there are those tethered dogs that bark next to bathtubs full of rainwater, or those cats that frolic in freedom. This is Armenia, a state of three million deep in the heart of the Caucasus region.

At 30 kilometers west of Yerevan (Armenia’s capital), Ardashar could well be a regular Armenian village were it not for the fact that most of its 700 inhabitants belong to the Yezidi community. Jundi Jundoyan, a local spiritual leader, awaits IPS at the entrance of his house. At 68, he boasts that many Armenians have asked him about his ancestral cult. Jundoyan is always willing to explain things, he just asks for patience.

God, who is also the sun, he explains, has 3,000 names and seven archangels. He created the world from a pearl, but then he disregarded it. He also brought Adam and Eve to life and forced Malak Tawus, the sacred peacock (the chief archangel) to serve them. But Tawus refused: why should one bow to the whims of a couple of simple mortals? In the end, that dispute between him and God was settled and the fallen archangel was finally redeemed.

“When we talk about human rights we insist that we must be alert on a daily basis. Unfortunately, many do not understand it that way. They reject being a minority because they are afraid that a special status could damage their brotherhood with the Armenians. But brotherhood cannot exist without equality”

It’s an ancestral cult that has incorporated elements of Mazdaism, Zoroastrianism, Christianity and Islam over the centuries, and which has around half a million followers in the Middle East and another half in the diaspora.

The Yezidis, however, are not originally from the southern Caucasus but from somewhere in northern Mesopotamia. In fact, Jundoyan explains it all in Kurmanyi (a variant of Kurdish spoken in Turkey and Syria).

It was at the beginning of the 20th century when many fled to the Caucasus – along with Armenians and Syriacs – escaping genocide in Anatolia. Jundoyan remembers it just before walking into a room where dozens of blankets are stacked, which, he claims, preserve “treasures brought from Lalish (his most sacred temple, in northern Iraq) and many other relics.”

The largest Yezidi temple in the world stands a few kilometers from here. Built in 2019 thanks to private contributions it also hosts a set of statues of Armenian Yezidi great men, including that of an Iraqi Kurdish woman. It is Nadia Murad, one of those young women enslaved by the Islamic State in 2014 during the genocide perpetrated against the Yezidis of Sinjar (northern Iraq). Murad was awarded the Nobel Peace Prize four years later.

“What did France, America, etc. do when the Islamic State massacred thousands of our people in Iraq and enslaved all those women?” Jundoyan blurts out, shortly before asking for a toast to the “martyrs”: both those from Anatolia from over a hundred years ago as well as the more recent ones from Iraq.

And then there are those who left. The Armenian Yezidis were close to 100,000 individuals in the times of the USSR, but the last census (in 2011) placed them at just 35,000. Those who remain try to survive through farming or herding.

“Everyone is leaving for Russia,” laments the host. 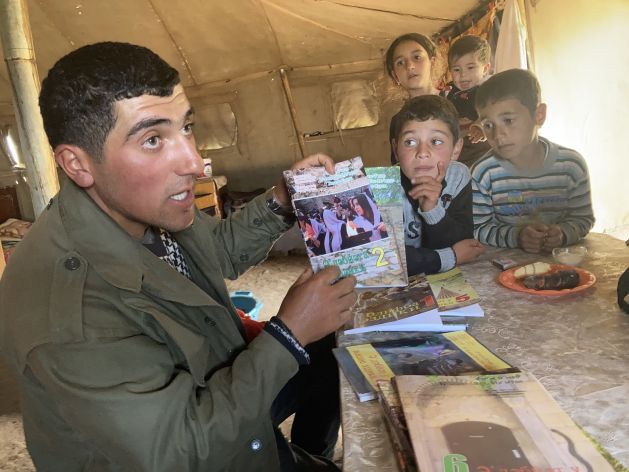 The Yezidi Center for Human Rights is an NGO founded in 2018 focused on protecting the rights of this community.

One of its most active members is Sashik Sultanyan, a 27-year-old lawyer who faces six years in prison for “incitement to hatred”. An interview he gave in June 2020 on a Yezidi radio channel in Iraq earned him a complaint from Veto Armenia, a far-right organization.

Someone took care to translate (from Kurdish into Armenian) a conversation in which Sultanyan spoke of “discrimination” towards his people. He denounced that Yezidi lands are being expropriated under legal pretexts and that their linguistic and cultural rights are not respected. The Armenian prosecutor’s office speaks of a process “in accordance with national and international law.”

For its part, Amnesty International has denounced an attack against freedom of expression and the United Nations High Commissioner for Human Rights is asking Armenia to withdraw criminal charges they label as “intimidating.”

From his office in Yerevan, Sultanyan tells IPS that discrimination is “as real as those clichés about his community that television and the media repeat relentlessly”: they are always portrayed as illiterate, dirty and disorganized peasants or herdsmen.

Regarding the issue of the lands, Sultanyan clarifies that “the thieves are the oligarchs, and not the Armenians, as the translation of the interview said.” And then there is also the issue of language. Although classes in Kurmanyi are offered at Yezidi children’s schools, the subject is not part of the official curriculum.

Besides, the text books are in Cyrillic when the most logical thing, Sultanyan insists, would be to use the Latin alphabet, which is the one used by the Kurds of Turkey and Syria.

In fact, the first Kurdish-language newspaper, Riya Taze (“New Road”), was founded in Armenia in 1930, but any link between this minority and a neighboring people, the Kurds, with a population much larger than that of the country, is something that Yerevan does not see with good eyes today.

“When we talk about human rights we insist that we must be alert on a daily basis. Unfortunately, many do not understand it that way. They reject being a minority because they are afraid that a special status could damage their brotherhood with the Armenians. But brotherhood cannot exist without equality,” Sultanyan resolves.

The Nagorno-Karabakh war of 2020 has given some visibility to the community. In that 44-day conflict that ended with an overwhelming victory for Azerbaijan, there were more than twenty young Yezidis who lost their life in the ranks of the Armenian Army.

One of them was Samad Saloyan. His parents, Yuri and Nina, still live in the Zartonk, one of those villages around the Yezidi temple. The family has turned the living room into some kind of mausoleum erected to the memory of the lost son: there are photos of him as a child, or dressed as a soldier; there´s also a Yezidi flag (white and red with a sun in the center) as well as set of army medals and others from his sporting victories.

“There is nothing worse than talking about your own child in the past tense,” Yuri tells IPS. Nina has a hard time getting started until a sea of tears breaks the dam and her words overflow.

Her son was recruited at the age of 18. He was about to graduate when the war broke out, but he was finally mobilized. He survived 42 days of hell, until a bomb dropped from a drone killed him and three others.

“It was just two days before the war ended,” Nina repeats, caught up in a monologue that runs in a loop, but that always leads to a dead end: Samad is no longer in this world.

The Yezidis believe in transmigration, a chain of reincarnations that serves to purify the spirit until it becomes one with God.

But this is no comfort for the Saloyans. Only when the tears give the first truce is it possible to change the subject. Do they go to the temple? Do they keep Yezidi festivities? “Yes, more or less”. And how has the harvest been this year?

Yuri points to the lack of rain, there there is no water and that the land does not provide. Making ends meet has become a real challenge. Besides, who can assure them that another war with Azerbaijan will not break out? Armed incidents are getting increasingly recurrent along the border.

Nina raises her head and searches Yuri with her eyes. They have relatives in Russia. Most likely, she says, they will also leave.