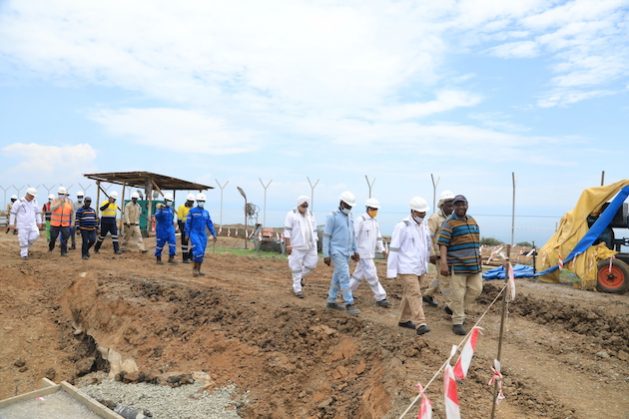 Tanzanian officials tour the Kingfisher upstream oil project in Uganda. The African Union has adopted a position of energy access which includes deploying all forms of energy resources, including non-renewable and renewables, to address the energy crisis in the continent. Credit: Wambi Michael/IPS

Kampala, Oct 5 2022 (IPS) - Thirty-year-old Difasi Amooti Kisembo is one of the demonstrators near the EU delegation offices in Kampala. He and a handful of others have traveled from Uganda’s oil and gas-rich Albertine region’s district to Uganda’s capital Kampala to express their displeasure with an EU Parliament’s resolution against the planned construction of the East African Crude Oil Pipeline.

“EU Stop neocolonialism and imperialism on Uganda’s oil projects,” reads the placard that Kisembo holding. Next to Kisembo is Lucas Eikiriza with a message: “Our pipeline is safe, EU stand aside”.

While there is opposition to the planned construction of a 1,443km pipeline from Uganda through Tanzania and Tilenga and Kingfisher upstream oil projects in Uganda, Kisembo told IPS that he has, over the last 16 years, patiently waited to see oil flow from this formerly sleepy and remote part of Uganda.

“I have not seen that oil with my eyes, but I’m already seeing the benefits. The roads are very good now, there were grass-thatched huts all over my village, but those have been replaced with iron-roofed (ones) thanks to oil that was discovered in Bunyoro,” Kisembo told IPS. “So when I heard that the Europeans want the government to stop the projects, I said that we, the young Banyoro, should stand up against that nonsense just like our forefathers fought the British colonialists.”

The landscape in Buliisa and Hoima districts has drastically changed with a number of needed infrastructures like the Central Processing Facility, an international airport, and well pads under construction.

“Everyone is going to gain. Anytime I’m sure that everybody is going to enjoy this oil and the developments which are coming in,” said Peter Mayanja, a real estate dealer and owner of Farm Bridge Investments, told IPS

President Yoweri Museveni in February said, “This project is a very important one for this region. This money will boost our economy,”

The EU parliament in mid-September adopted a resolution denouncing the Tilenga and EACOP projects by TotalEnergies, China National Offshore Oil Corporation, or CNOOC Group, backed by the governments of Uganda and Tanzania.

“Put an end to the extractive activities in protected and sensitive ecosystems, including the shores of Lake Albert,” reads part of the resolution. They suggested that to have a chance to limit global warming to 1,5°C, no new oil extraction project should be developed.

The resolution has since attracted criticism from Uganda, Tanzania, and from some of the advocates in Africa who believe that Africa should be allowed to harness their oil and gas discoveries to develop their economies as they transition to renewable energy sources.

Uganda’s Vice President, Jessica Alupo, took the matter to the just concluded UN General Assembly in New York. She said it is hypocritical for countries that have been at the center of polluting the environment to preach to countries that have borne the impact of those environmental violations how to act responsibly. “Our view is that development should be environmentally friendly, inclusive, and provide benefits for all; it should leave no one behind,” Alupo said

While Uganda’s International Relations Minister, Henry Okello Oryem, told IPS, “So the European don’t want Africa to develop its natural resources? And yet it is the only way to solve our problems. Our people continue to cut trees as the cheapest source of fuel. So if we don’t avail them with alternatives like gas, who will?” asked Oryem.

On the other hand, Proscovia Nabbanja, the chief executive of the Uganda National Oil Company (UNOC), which has stakes in EACOP, told IPS that the suggestion by the wealthier nations to Africa and other developing countries to leave their oil and gas underground was unfair.

“While I understand the concerns related to climate change, I don’t want to ignore the value that the projects bring to alleviate energy poverty, which is a critical issue in Uganda, improving the economy, and also propelling our country to industrialization,” said Nabbanja.

Uganda expects 160,000 jobs to be created by the projects located in Uganda’s Albertine Graben, bordering DRC. The East Africa Crude Oil Pipeline (EACOP) is expected to create five thousand jobs during its construction.

NJ Ayuk, executive chair of the African Energy Chamber lobby group told IPS the EU Parliament’s resolution was part of the overall move to block the extraction of oil and gas in Africa. He said apart from Uganda’s case, there are similar attempts to block fight the proposed onshore liquefied natural gas project at Lindi — which could help commercialize about 50 trillion cubic feet of offshore gas by Tanzania.

Ayuk told IPS that some of the campaigns are being funded by groups from the west to civil society organizations based in countries that have vast oil and gas resources.

Sizeable deposits of oil and gas have been discovered in Uganda, Namibia, Côte d’Ivoire, Kenya, Ghana, Angola, DRC, and South Sudan, among others.

“I want the civil society to fiercely advocate for the environment so that we don’t have any kind of environmental risks. But it is important that they don’t put out misinformation,” said Ayuk. “It is really important because that misinformation comes to the detriment of young people who need jobs. It comes to the detriment of a country that needs investment, that wants to grow. That wants to survive on its resources without going for aid.”

He said the drive against investment in fossil fuel in Africa is an ideological position from the western countries against Africa’s oil and gas discoveries.

Modestus Martin Lumato, Director General Energy and Water Utilities Regulatory Authority (EWURA), who recently visited Uganda, told IPS that 70% of Tanzania’s power generation is from natural gas and that abandoning it that fast would negatively impact the country.

“Sixty of our industries are powered by natural gas. In 2010 we discovered a huge deposit of natural gas in the deep sea; Tanzania is looking forward to exporting it. We expect oil and gas companies to invest over $30 billion in a project planned to produce 10 million tons per annum,” said Lumato.

Tanzania’s natural gas reserves are said to be equivalent to US$150 billion- or 6-times Tanzania’s current GDP.

A number of meetings have been held in Africa in preparation for the 27th UN Climate Change Conference of Parties (COP27) will be held in Egypt from November 7 to 18, 2022.

In mid-July, a technical committee of the African Union adopted “The African Common Position on Energy Access and Just Transition”. It stipulates that Africa will continue to deploy all forms of its abundant energy resources, including non-renewable and renewable, to address the energy crisis in the continent.

This position was discussed at the 4th Africa Climate talks at the University Eduardo Mondlane in Maputo, Mozambique, as well as African Climate Week in Togo.

He told IPS that Africa accounts for 17% of the global population and contributes to less than 4% of emissions, and it is the least energized region in the world.

“Africa is home to 78% of people who don’t have electricity; at the same time, it needs to industrialize, it needs to close the development gap to meet the SDG. So there should be a win-win situation. Let Africa use its natural gas as a transition fuel to renewable energy,” said Mafor.

According to Mafor, energy poverty is holding Africa from development. “Africa has got a rich source of energy, whether fossils or renewables. The demand is there, but the supply is not there; we can’t progress on SDGs or Africa Union Agenda 2063 if there is a huge energy access problem that is not addressed,” he said

The African Union, through UN Economic Commission for Africa (UNECA), has indicated that over the past ten years, less than two percent of the public clean energy investment globally went to Africa.

That finding was buttressed by the International Energy Agency’s  Cost of Capital Dashboard launched this month. It observed that emerging and developing economies, excluding China, account for less than one-fifth of global investment in clean energy.

One of the key barriers, according to IEA, is a high cost of capital, reflecting some real and perceived risks about investment in these economies

The Special Representative of COP27, President-Designate Wael Aboulmagd, has indicated the developed countries have fallen short of delivering the $100 billion.

“It has never been delivered … But what people don’t talk about is if we had the $100 billion, would we be much better off? The $100 is an arbitrary figure that was put out of thin air that has no reality on the ground,” observed Aboulmagd.

“We as responsible global citizens said we will come along on the understanding that appropriate funding will be there. So this trust has been broken by failure to deliver year, after year,” said Aboulmagd.

According to Aboulmagd, at present, only 2% of renewable energy investment from the private sector goes to Africa.

“With more than 600 million in Africa lacking access to basic electricity, universal access to energy is a priority,” he said.

Back in Uganda and Tanzania, Ayuk told IPS that citizens like Zephaniah and Mayanja, and Awadh should be worried about campaigns trying to block projects like Lake Albert Development and EACOP.

“They should be worried because there is a very strong movement saying the money should not come into African oil and gas. I think we need to rally African financing for projects.”