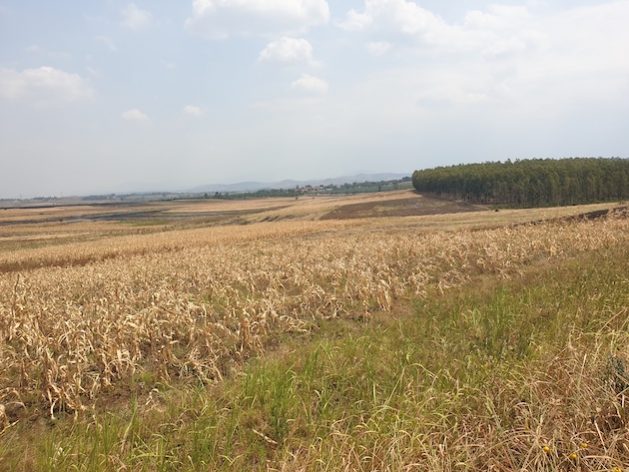 Failed crop in Southwestern Uganda. While there is a lot of focus on Karamoja, most parts of Uganda have been affected by erratic rains leading to crop failure. Credit Wambi Michael/IPS

Kampala, Aug 11 2022 (IPS) - Hundreds of people have died of famine in Uganda’s Karamoja region, and local leaders say that some people are now eating grass to survive.

For the first time in three years, all the nine districts of Karamoja: Kaabong, Moroto, Kotido, Napak, Nabilatuk, Amudat, Karenga, Abim and Nakapiripit are at crisis level or worse according to IPC classification.

The Integrated Food Security Phase Classification (IPC) uses a scale of one to five to measure food insecurity. The situation in Karamoja has reached a crisis level close to catastrophe level.

Nakut Faith Loru, a Member of Parliament for Kabong district, told IPS that the number of those dying from starvation was rising despite efforts by the government to deliver some food relief.

“The hunger situation in Kaabong district is getting worse, especially for the elderly people. They are dying in large numbers due to starvation, with those on the verge of dying avoiding sleep because they fear dying while asleep,” she said

By the end of July, all the districts were facing acute malnutrition at critical levels.

Four-year-old Aleper is among the children under treatment for malnutrition at Kabong general hospital. He is emaciated, a living symbol of the horrors of starvation again killing people daily in remote northeastern Uganda. Aleper’s every rib is visible, his stomach is descended, and tinny folds of skin cover where his buttocks should be.

High food prices have left many families unable to afford nutritious foods – forcing them to find other ways to cope.

“The situation in Karamoja is an example of how a perfect storm of climate change, conflict, rising food costs, the impact of Covid-19 and limited resources is increasing the number of hungry people,” said Abdirahman Meygag, WFP Uganda Representative.

Shocking images of the Karamojong children and the elderly starving to death have exposed how ill-prepared the government has been in response to a situation that some experts say was very predictable.

The Speaker of Uganda’s Parliament, Anita Among, is one of those that have expressed concern about the deplorable situation in the Karamoja region.

“We have seen so many starving people, malnourished children. The government needs to come out clearly on how to address this issue. In the short, medium, and long term,” said Anita Among

The opposition leader in Parliament, Mathias Mpuuga agreed that providing relief aid was not sustainable. “We have a general drought and widespread crop failure in the country. Many people are already reaching out for food,” said Mpuuga.

Farmers from regions other than Karamoja have complained of poor or no harvests. Kaleb Ejioninga from the West Nile region along the border between Uganda and DRC is among those whose crops have withered before harvest.

“We planted maize and sorghum. They all wilted. The government should come to our rescue. If possible, they should find us quick-maturing seed varieties. Because even when the rain comes, if we plant the same seed, they may not grow,” Ejioninga appealed.

Another farmer, Joseph Indiya, told IPS that many farmers were surprised by the rate of crop failure.

“Actually, the soil here is very fertile. We have rivers around. Production has been so high, but this has surprised us this time. There used to be some rain in June and then rain throughout July. But now, there is not even a single drop of rain,” said Indiya.

The irony is that while most of Karamoja and other part is dry, catastrophic flooding in the Eastern Region’s Mbale district killed 29 people and left hundreds homeless after heavy rain, which caused rivers to overflow.

Uganda’s Minister for Agriculture, Frank Tumwebaze, said the situation in Karamoja and elsewhere in Uganda is not different from that in the Horn of Africa where countries like Somalia, Ethiopia, Kenya, South Sudan, and Sudan are faced with food insecurity due to failed rains across four rain seasons.

“The problem is known. Climate change is real. We are going to work with the ministry of finance to see how to make irrigation equipment more accessible. Farming must continue while aware that we cannot continue depending on chances of nature,” Tumwebaze told journalists in Kampala.

UNICEF Representative to Uganda, Munir Safieldin, agrees that the crisis in Karamoja is not different from the situation in the Horn of Africa. He believes the situation could have been averted.

“We must not wait for thousands of children to die. We have said ‘never again’ too many times. We need long-term and predictable funding to help these children and their families,” said Munir Safieldin.

Amidst the crisis of crop failure in Karamoja and other parts of Uganda, there is debate on whether it is caused by climate change or variability. A number of experts believe the situation was highly predicted. They argue farmers have not been helped to adapt or cope with resultant changes.

One of such scientists is Ugandan plant biologist Dr Ambrose Agona, the Director General of the National Agricultural Organisation (NARO).

“I would like to say that Uganda doesn’t suffer much from climate change but suffers from climate variability,” explained Agona.

“Studies conducted recently demonstrated that the total amount of rainfall meant for this country has not changed in terms of volumes. It is not true that we have not had rain during the two failed seasons,” said Agona, whose body is charged with guiding and coordinating all agricultural research in Uganda.

He told IPS that farmers in most parts of Uganda have long thought that the first rain season begins typically around March, and then it continues to June, so they don’t take advantage of the rain that sometimes sets in as early as January.

Agona told IPS that farmers that have taken advantage of the onset of the rain actually harvest, especially when they plant drought-resistant and early-maturing crop varieties.

In June, the FAO office in Uganda released the IPC classification for Karamoja, warning of the crisis.

“The IPC results we have released today are not so different from what we have seen in the last few years. We need to shift our focus from responding to this food insecurity crisis every year after it has already happened,” said Antonio Querido, FAO representative to Uganda.

How does a farmer cope with climate variability?

Veterinarian and researcher Dr William Olaho-Mukani told IPS that the problem in Karamoja and Uganda generally had been the failure to deploy technologies to help farmers farm when there is no rain.

“This is where the problem is. Don’t firefight. Give farmers technologies for water harvesting, quick maturing, and drought-resistant crops,” said Olaho-Mukani.

“Karamoja has a lot of water when it rains. The challenge has been technology transfer. There is a lot of research by NARO, but transferring technology to the farmer has been a problem. We must ensure that they are available at affordable prices.”

In June 2021, Uganda adopted a Technology Action Plan for climate change adaptation. It noted: “The increase in temperature due to climate change will potentially change rainfall seasonality. The erratic and unpredictable weather patterns are likely to disrupt farm calendars with high-level of field-based post-harvest losses.”