A Beacon of Light in Dark Times: the Dublin Platform for Human Rights Defenders 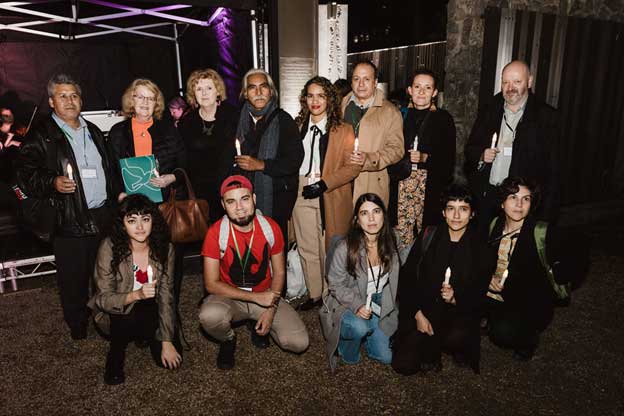 DUBLIN, Ireland, Nov 2 2022 (IPS) - Before she was murdered in Honduras in 2016, the Lenca Indigenous woman and human rights defender Berta Cáceres poignantly said: “They are afraid of us because we are not afraid of them.”

It is a measure of the continued effectiveness of human rights defenders around the world that autocrats, bigots and powerful economic interests continue to invest significant resources to try and silence them or disrupt their work.

Whilst human rights academics debate the relevance of a weakened UN system, the reality on the ground, in countless countries across all regions, is that communities continue to mobilize around a struggle framed in rights.

Sudan’s revolution united under the banner of “freedom, peace and justice,” while “women, life, freedom,” has become the slogan of the protests in Iran. And as Sonia Guajajara, head of the Articulation of Indigenous Peoples of Brazil (ABIP), said at the UN Climate Conference, “if there is no protection of indigenous territories and rights, there will also be no solution to the climate crisis, because we are part of that solution.”

The human rights defenders we work with every day at Front Line Defenders are an inspiration to all of us.

Liah Ghazanfar Jawad continues to work to support women and women’s rights in Afghanistan under brutal Taliban rule even though she has the option to be with her family outside the country. 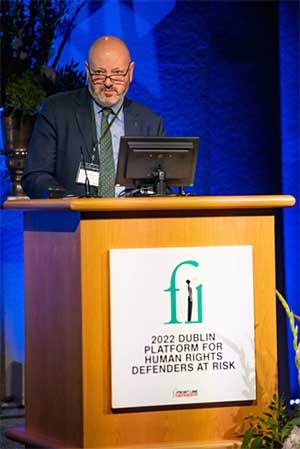 Obert Masaraure and Robson Chere of the Amalgamated Rural Teachers Union of Zimbabwe choose to continue their struggle even as they are detained, ill-treated and released. And many human rights defenders continue, in spite of the bombings and missile strikes, to document war crimes and provide support to victims in Ukraine.

As Diana Berg, artist and human rights defender from Donetsk, told a packed conference room in Dublin, Ireland last week, “until I get killed by a Russian Iranian drone I will help survivors [and] deported teenagers and [help to] evacuate museums.”

The first Dublin Platform for Human Rights Defenders took place just over 20 years ago in January 2002. Our visionary founder, Mary Lawlor – now the UN Special Rapporteur on Human Rights Defenders – was determined that the organization would be driven by the needs expressed by defenders themselves. With a tiny team she worked wonders to bring over 100 human rights defenders to that launch of Front Line Defenders.

We are committed to the struggle. Our work is built on our profound respect for human rights defenders; for their work, their courage and their knowledge. We stand with them, and will provide support in every way that we can.

As we gathered in Dublin, we were acutely aware of those human rights defenders who were not with us. In 2016 we helped to set up a HRD Memorial Project to gather information on the cases of defenders who are targeted and killed because of their human rights work; to illustrate the scale of the phenomenon, to emphasize the systematic nature of these attacks, and to provide a space to pay tribute.

Following on from this, we worked with the Irish Department of Foreign Affairs to create a HRD Memorial monument in Dublin – a unique space where we recently held a poignant candlelight vigil to commemorate the hundreds of human rights defenders who have been killed while carrying out their peaceful work.

There are also many human rights defenders we would like to have welcomed to Dublin but whose governments prevented them from being there. These include long-term imprisoned human rights defenders such as Narges Mohhamadi in Iran, Dawit Isaac in Eritrea, Maria Rabkova in Belarus, Trần Huỳnh Duy Thức in Vietnam, Pablo López Alavez in Mexico and Ilham Tohti in China.

In particular I want to highlight my friend and former colleague Abdulhadi Al-Khawaja, who was abducted, tortured and sentenced to life in prison after a sham trial over 11 years ago. We continue to work for Abdulhadi’s release and for the release of all human rights defenders who are in prison.

The Iranian woman human rights defender Atena Daemi – also unable to be with us in Dublin because of the ongoing protests in Iran – nonetheless shared a powerful message about her motivation in dark times: “Humanity is our common love and fight. Human rights is the goal of all of us. It is the ultimate human joy and freedom and happiness.”

Such strength of conviction is what motivates us at Front Line Defenders to continue to protect and support human rights defenders worldwide and stand with them in their struggle against oppression.