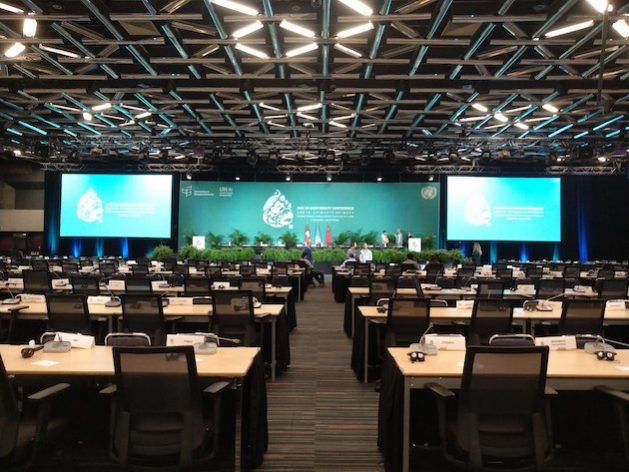 Activists at COP15 believe that keeping infrastructure off the radar is a problem and have expressed concern about the Belt and Road Initiative (BRI) of China which impacts on biodiversity hotspots and Indigenous communities. Credit: Stella Paul/IPS

Montreal, Dec 15 2022 (IPS) - As the COP entered its crucial second week, negotiations are intensifying now. A slew of new contact groups – meeting mostly behind closed doors – are discussing the minutest details of the Global Biodiversity Framework and the contentious issues within or around it, such as Digital Sequencing Information, Access, and Benefit Sharing. The core aim of all these groups is to talk and resolve all issues and produce a draft treaty that will be acceptable to all parties.

In this flurry of activities, however, there’s an elephant in the room that no one wants to see: The impact of mega infrastructural projects on biodiversity. Leading the table of these most impacting mega projects is the Belt and Road Initiative (BRI) of China – the president of COP15.

China launched BRI in 2013, intending to revive and strengthen its trade links with the rest of the world. Today, it’s a mammoth project involving several regions of Asia, Africa and Europe with plans to construct roads, railways, ports, and, more recently, health, digital, and space projects, building physical and economic links, enhancing trade and interconnectivity.

It is, however, not a single Chinese government initiative but consists of many different projects in multiple countries, financed through multiple avenues, including Chinese and international banks and investment funds.

According to a 2019 paper published by the Center for Economics and Business Research (CEBR), the BRI was likely to boost world GDP by $7.1 trillion annually within the next two decades. The Information Office of the Chinese government also reports that BRI has created more than 244,000 jobs for locals abroad.

However, a vast majority of BRI projects require the use of Chinese companies, labour, and raw materials, meaning the GDP gains from BRI will go to the Chinese ‘locals,’ not to the locals of the countries in which China has invested.

An Ambition Vehicle or a Debt Trap

Today, at least sixty-four countries fall within its ambit, and the number is increasing.  The terrestrial route of BRI aims to cut across Central Asia, Russia, India, Pakistan and Europe, and the maritime route runs along the coast of Asia, East Africa, and Europe.

However, many of these small countries saw themselves falling into mounting debts. The first is Sri Lanka which recently plunged into a financial crisis from debts owed to China for highways, ports, airports, and a coal power plant. Sri Lanka owes China lenders over $7.4 billion – 20% of its total foreign debt. Other countries following the footsteps of Sri Lanka are Kyrgyzstan and Montenegro; while Kyrgyzstan owes 40% of its foreign debt, including $1.8 billion to Chinese lenders, the European Union (EU) refused to pay off a $1 billion Chinese loan for the BRI but has offered help on other infrastructure projects.

The financial crisis put aside, the implication of the BRI on the region’s biodiversity is huge as it includes many different environmentally important areas such as protected areas, key landscapes, Global 200 Ecoregions (a list of ecoregions identified by the World Wide Fund for Nature (WWF) as priorities for conservation), and biodiversity hotspots that cover the distribution range of flagship species.  In fact, the study found that 32% of the total area of all protected areas in countries crossed by BRI corridors were potentially affected by the project. There are also areas that are important for delivering ecosystem services that provide social and economic benefits to people.

According to a geospatial study done by WWF, which examined the environmental impacts of BRI, the initiative will affect 1,700 biodiversity hotspots, threaten 265 species, and potentially introduce hundreds of alien species that threaten these fragile ecosystems.

According to Allie Constantine, Gender and Indigenous rights Advisor to Global Forest Coalition, there is still no impact assessment on how the BRI affects women, and China has not released data on gender and the BRI. However, given that China has signed and ratified most UN human rights treaties, including the Convention on the Elimination of all Forms of Discrimination against Women (CEDAW) and the United Nations Sustainable Development Goals (Goal 5 being “Gender Equality”), the country is obliged to report on gender impacts of BRI projects it operates.

While China’s 14th Five-Year plan discusses women’s equality and gender rights, there is no indication of how China will implement or enforce this within the BRI.

“However, even without this data, we can still make certain inferences regarding gendered impacts,” says Constantine, who recently conducted a study on the impact of BRI on women and indigenous peoples in Southeast Asia.

The study reveals that BRI’s expansion through important ecological corridors, including Chinese-backed hydropower projects built along the Mekong River that cause changes in river flow, directly puts specific communities and fragile ecosystems at risk. In turn, this impacts fish migrations and creates a further loss of livelihoods for downstream communities in Laos, Cambodia, Thailand and Vietnam that rely on the river for sustenance.

It also says that specific BRI projects often negatively affect indigenous and forest communities. For example, the Indigenous Mah Meri community in Malaysia is frequently harmed by government processes, including the development of BRI ports in Mah Meri territories. Although Malaysia supports the United Nations Declaration on the Rights of Indigenous Peoples (UNDRIP), it frequently acts against Indigenous land and human rights, Constantine’s study reveals.

Since the outbreak of COVID-19, China has been intensifying “Green BRI” efforts, including research on how to make BRI projects more environmentally sound. For example, in 2021, the Chinese ministries of Foreign Commerce and Ecology and Environment released “Green Development Guidelines.” China has also committed to ending coal-fired power plants and investing in renewable energy sources.

Speaking to IPS, Li Shuo, Global Policy Advisor at Greenpeace East Asia, said that within China, there is a growing concern over the country’s investment overseas, especially in high-carbon projects such as coal plants.

“It’s a little hard to say if BRI is a good thing or a bad thing for the local economy or local environment. You have to look at it on a case-by-case basis,“ says Shuo, “But there is a clear recognition that some of the BRI projects are quite problematic from an environmental point of view. I think there is a realization from the Chinese side as well, and that is why a year ago, there was this Chinese commitment to not fund coal-fired power projects. The announcement was made in September 2021 in the UN General Assembly.”

Shuo, however, says that there is still no such recognition or public debate when it comes to biodiversity.

“There is a recognition that China should not invest in high-carbon projects, so there is a slow transition, but on the other hand, where biodiversity is feeding into all these, I think you are in need of more recognition on the Chinese side on the biodiversity implications of the BRI projects. I think climate recognition is slowly getting there but not necessarily on biodiversity. And if you think about it, a lot of the infrastructural projects will have a negative footprint,” Shuo says.

Observers at COP15, however, are saying that with many destructive projects under the BRI, such as large dams built along the Mekong River, which also threaten biodiversity, forests, and forest communities—simply defunding coal and investing in other potentially harmful projects is not the solution.

Exclusion of Infrastructure in GBF

Infrastructure has not been included in the current biodiversity draft framework. On Dec 8, at a side event of the ongoing COP15, Amy Fraenkel, Executive Secretary, Convention on the Conservation of Migratory Species of Wild Animals (CMS), expressed alarm that infrastructure is not addressed in the GBF.

Highlighting that migratory species must be able to reach new habitats, she noted the CMS tackles threats posed to these species by infrastructure. She also called on governments and investors to consider whether there is a real need for new infrastructure developments and to look into alternatives, including “no new infrastructure” options.

Simone Lovera of the Global Forest Coalition has been more vocal in her criticism of BRI, the exclusion of infrastructure in the biodiversity framework and China’s silence on the initiative’s impact on biodiversity. She especially spoke out on how the current financing mechanism – already a contentious issue at COP15 could further fail if mega projects like BRI were continued to be ignored.

“It doesn’t make any sense to just close the financing gap; even US100 billion dollars per year, we have 1.3 trillion US dollars that are going to destructive activities. Sadly, China’s own Belt and Road Initiative is an example of initiatives that are still financing very harmful projects. They are trying to green it up, but they are not doing any gender analysis, and a lot of BRI activities are actually very harmful on the ground. So first and foremost, the thing China should do is look at its own Belt and Road Initiative and make sure that that is aligned. On the one hand, they claim to have ecological civilization at home, but they export the destruction to other countries,” Lovera told IPS News.

Speaking to IPS, Basile Van Havre- Co-chair of the GBF, said negotiators were now “focusing on not adding any new texts to the draft and instead were working to shift as much existing text as possible out of the brackets”. This means if infrastructure has been excluded from the GBF, it is not likely to be included now.

The onus of curbing the harms caused to biodiversity by projects like BRI falls entirely on the countries that own and run them – such as China.

“The European Union just banned commodities that come from deforestation and biodiversity destruction. It’s possible. Let us have an agreement here so they (China) also have a legal alignment. They can say, ‘okay, in line with this multilateral agreement, we will start banning products caused by biodiversity destruction, and I think the EU legislation will show it’s possible. It is a good example, and we very much look at China to do that,” Lovera says.