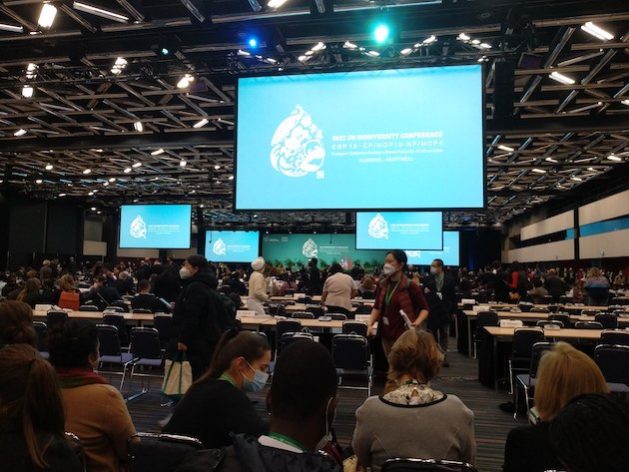 COP15 negotiations aim to conserve at least 30 percent of the world’s diversity by 2030. Credit: Stella Paul/IPS

Montreal, Dec 9 2022 (IPS) - The long-awaited 15th Convention of United Nations Biological Diversity (CBD COP15) finally started this week in Montreal, Canada. After four years of intense negotiations and delays caused by the COVID-19 pandemic, nations have gathered again for the final round of talks before adopting a new global treaty – the post-2020 Global Biodiversity Framework (GBF).

The GBF aims to conserve at least 30 percent of the world’s biodiversity by 2030. But even as the negotiations intensify, the job appears extremely tough, with many bottlenecks that make a clear outcome highly unlikely.

CBD COPs: A String of Failures

The Convention on Biological Diversity (CBD) was first adopted in 1992 in Rio de Janeiro, Brazil, alongside the Convention on Climate Change (UNFCCC) and the UN Convention to Combat Desertification. There are 196 member nations with the glaring exclusion of the United States. In 2010, at the CBD COP10 in Nagoya, Japan, countries adopted a set of 20 targets called the Aichi Biodiversity Targets. These targets were expected to stop the loss of biodiversity by 2020. But by 2020, various assessments made it clear that none of these targets had been met. Now more ambitious and emergency measures are needed.

The failure of the world to achieve the Aichi Targets makes it crucial that the world adopts a new treaty, and the GBF has more ambitious targets with adequate financial support to implement them. It should support groups already leading action on the ground, especially Indigenous Peoples and Local Communities (IPLC), and ensure more accountability for regularly monitoring the collective progress. This is what makes Montreal COP so crucial, especially when it’s already 2022, and the world now has only eight years left (out of the ten allotted years) to achieve the targets.

At the last Working Group meeting of the CBD COP held in Nairobi, Kenya, in June this year, IPS reported that the progress was far lower than expected. To put it into perspective, only two of the 21 targets of the GBF had clean text after the Nairobi meeting. The rest of the texts remained within brackets – 1800 in total, indicating the enormous amount of negotiation left to reach an agreement on the draft agreement.

On December 8, the second day of the negotiations, David Ainsworth – head of CBD Communications, said that in addition to the 1800, there were another 900 newly-added brackets. To ease the uphill task of cleaning this text through different stages of negotiations, a slew of contact groups had been formed, with each group being responsible for working on one of the most contentious issues. Little details were shared about these Contact Groups except that each would hold several rounds of negotiations with the parties – presumably those who raised the brackets – and find a headway. These meetings are closed to media and non-parties, including NGOs and other participants.

However, various civil society organizations, including the leaders of the IPLC, have criticized the groups’ formation because they are barred from participating.

“With the Working Group meetings, we could at least know what is going on. But the contact groups are having closed-door meetings; we don’t even have permission to enter these rooms,” said Jennifer Corpuz, an indigenous leader and a prominent voice for indigenous rights from International Indigenous Forum on Biodiversity.

“It was always difficult for us Indigenous peoples to make our voice heard before, but now it’s impossible for us to be included in the discussion and know what is going on.”

On Tuesday, at the opening ceremony of COP15, Canadian Prime Minister Justin Trudeau said, “Every leader must tell their negotiator to bring this ambition (conserving 30%of the world’s land and water) to their table as we reach a final framework over the next two weeks.”

Trudeau also announced an additional 350 million dollars for international biodiversity funding by Canada. The announcement and the speech were both received with thunderous applause.

However, three days since then, the mood has quickly changed, with little visible progress. “We see the delegates’ mood going down, together with their energy and hopes that this can have any great outcomes. And we hear the frustration: for many delegates, what took them to pursue such careers was, in essence, a love for the environment, for our peoples, and for the planet. We must dig in to find that motivation that helped many of us start this journey 10, 20, and for many over 30 years ago in Rio,” says Oscar Soria, director of Avaaz, a global advocacy group keeping a keen eye on the developments within COP15.

The ‘Paris Moment’ That May Never Come

Adoption of the GBF and achieving clear, strong results at COP15 was touted by many as the biodiversity’s ‘Paris moment’ – a reference to reaching a crucial global consensus on the conservation of the earth’s biodiversity and scripting a crucial diplomatic victory as it was done in the climate change COP 15 in Paris under the leadership of UNFCCC.

However, at the moment, the chances of this ‘Paris moment’ seem quite bleak. Only two of the 21 targets are for adoption. There are several bottlenecks in the ongoing negotiations, including Digital Sequencing Information (DSI), Access and Benefit Sharing and Resource Mobilization.

In addition, donors are introducing different “false solutions” that are more populist than effective. These include carbon credits, carbon removals, net zero, net gain or loss, and Nature-positive or Nature-based Solutions (NbS), according to Simone Lovera, Policy Director of the Global Forest Coalition (GFC).

“Alignment of these financial flows with the new global biodiversity framework must be at the heart of the negotiations if it is to have any chance of succeeding. Commercializing biodiversity, making it market-dependent, or allowing offsetting are pathways to failure,” Lovera says.

Others allege that financial institutions dealing with implementation are still stuck in old models and have yet to align their practices with sustainable development. Most financial corporations still fund projects that don’t align with sustainability goals, while debt servicing suffocates the budgets of many developing countries. Continuation of these practices would also destroy that ‘Paris moment’ in Montreal, even if multilateral negotiations here are successful.

Clearly, creating a ‘Paris moment’ at COP15 will require a full-scale course correction and far greater leadership and urgency than we have seen from the UN and governments to date. The CBD held emergency working group meetings immediately before COP15, but the discussions failed to achieve significant progress, leaving a successful and ambitious outcome of COP15 in jeopardy.

In a statement yesterday, Campaign for Nature – a global group that focuses on advocacy, communications, and alliance-building effort to help achieve CBD’s 30×30 goal (which calls for 30% conservation of the earth’s land and sea in protected and other area-based conservation measures.)

It laid out the steps that are needed to get past the bottleneck on finance: “The agreement must contain a package which should include a commitment by all governments to increase domestic spending on biodiversity and end subsidies that are harmful to nature, redirecting these funds to protecting and restoring nature; an increase of at least 60 billion USD in new public international biodiversity finance in the form of grants as well as directly to Indigenous Peoples and local communities.”