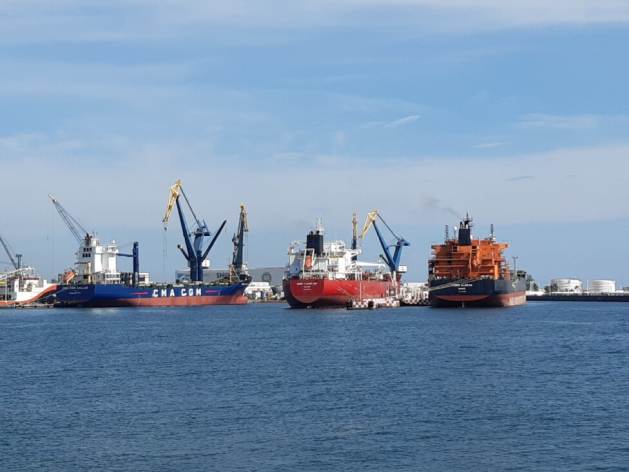 Despite the necessity of refining green marine fuels, Mexico lacks a plan to transit towards those varieties. In the imagen, some ships wait for arrival at the port of Veracruz, in the state of the same name, in in the southeast of the country, in August 2022. Credit: Emilio Godoy / IPS

VERACRUZ, Mexico, Dec 12 2022 (IPS) - VERACRUZ, Mexico – By 2025, the state-owned Petroleos Mexicanos (Pemex) should comply with Mexican regulations to produce clean fuels, including marine ones, but there’s an obstacle: Mexico lacks a plan for the development of cleaner marine fuels.

Clean gasoline is expected to be processed in the Dos Bocas refinery, located in the southeastern state of Tabasco, which would begin operations in 2023, with a capacity to process 170,000 barrels of gasoline and 120,000 barrels of ultra-low sulfur diesel daily, to prop up domestic production and thus cushion dependence on imports, especially from the United States.

Emissions of sulfur dioxide (SO2) from the burning of high-sulfur fuels, derived as a residue from crude oil distillation, lead to sulfurous particles in the air, which can trigger asthma and worsen heart and lung diseases, as well as threaten marine and land ecosystems, according to the U.S. Environmental Protection Agency (EPA).

SO2 lasts only a few days in the atmosphere, but when dissolved in water it generates acids that lend it its dangerous nature to human health.

Meanwhile, the emissions of nitrous dioxide (NOx), derived also from hydrocarbon consumption, stream into smog, when mixed with ground-level ozone. NOx remains 114 years in the atmosphere, according to several scientific studies.

In water, hydrocarbons block the entry of light and limit the photosynthesis of algae and other plants, and in fauna they can cause poisoning, alterations of reproductive cycles and intoxication, EPA adds.

But Mexico lacks measurements of atmospheric and marine pollution. Nor does it have roadmaps for its reduction or concrete plans to produce marine fuels with reduced sulfur content, an element harmful to human health and the environment.

The production of green fuels is vital for maritime transport, whose main consumer in Mexico is the national fleet, and Pemex would play a prominet role in it.

The fact is that the national oil company “has no capacity to refine clean fuels, nor does it intend to do so,” said Rodolfo Navarro, director of the non-governmental company Comunicar para Conservar, established in the area of Cozumel, in the southeastern state of Quintana Roo and one of the largest cruise ships receiver in the world.

The 2021 report “Mexico: Promoting the Future of Mexico’s Maritime Transport Role in Transforming Global Transport through Green Hydrogen Derivatives” calculated international ships departing at Mexico emitted 7,85 million tons of CO2, 10 874 of SO2, 18 920 of NOx and 3 200 tons of particulate matter in 2018.

The report, prepared by the non-governmental organization Getting to Zero Coalition and the global platform Partnering for Green Growth and the Global Goals 2030, estimated international arrivals to Mexico released into the atmosphere 10,35 million tons of CO2, 14 947 of SO2, 25 697 of NOx and 4 300 tons of particulate matter.

As of 2020, IMO has applied regulations limiting the sulfur content used on cargo ships to 0,5%, from 3,5%. Thus, the agency will need to reduce pollution by 77%, equivalent to 8,5 million tons of sulfur dioxide (SO2). 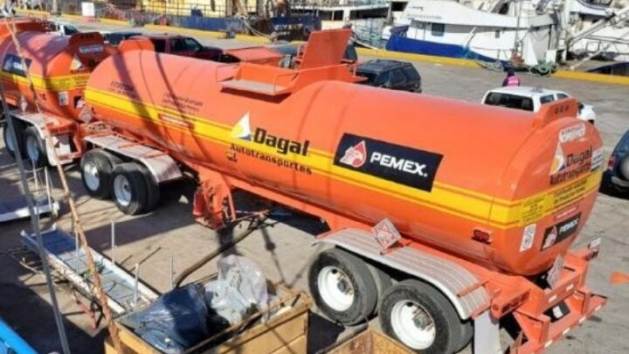 A marine diesel truck pump at Ensenada, in the northwestern state of Baja California, property of Pemex and a private partner. Credit: Pemex

From December 2018, 15 parts per million (ppm) ultra-low sulfur diesel has been sold in Mexico, while all gasoline must have a content of 30-80 ppm.

The regulation on oil quality also stipulated a timeline for the reduction of sulfur in gasoline and diesel in a range of 15-30 ppm. The lower that amount, the less sulfur and the better for the vehicle’s engines, because they function more efficiently. But despite the progress, Pemex never fully complied with that standard. Meanwhile, the limit for agricultural and marine diesel stands at 500 ppm, meaning it is much more laden with sulfur.

Marine diesel has more energy density because a motorboat needs more power than a land vehicle.

This data indicates, on one hand, that domestic ships tend to consume more marine diesel than IFO 15, which is more polluting. On the other hand, it would be easier to replace this with green fuels.

The Mexican fleet comprises 2 697 vessels, including fishing vessels, tankers, freighters, and containers. By 2030, these would emit 6 963 tons of NOx, docked ships would emit 528 235 tons and cargo handling would be responsible for 3 752 tons. Regarding SO2, these indicators would add up to 861, 65 294 and 276 tons, respectively. Maritime transport would release 277 tons of particulate matter and docked ships, 20 970, according to projections by the North American Commission for Environmental Cooperation. 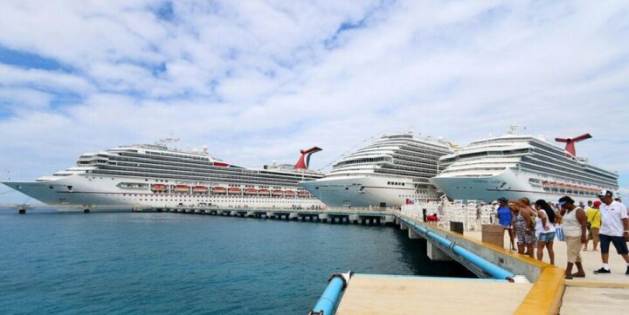 Big ship cruisers docked in Cozumel, one of the biggest ports of the world that receive this type of recreational ships, in southeast Mexico. Credit: Government of Quintana Roo

Mexico should introduce other policies beyond clean diesel refining, according to Alison Shaw, policy lead at the University College of London’s Energy Institute Shipping Group.

“While clean diesel may offer a bridging fuel for some sectors, perhaps for public transport or trucking, the deep-sea commercial shipping industry still widely relies on heavy fuel oil and this sector’s transition is about moving from fossil fuels entirely,” she wrote in an email to IPS.

The specialist highlighted the production of clean diesel doesn’t cut GHG in the same level as scalable zero-emissions fuels, such as hydrogen or ammonia, and it would just be a small, temporary improvement. “It’s not the solution for the maritime industry,” she emphasized.

Some reports stress the Mexican potential to transition to a sustainable maritime shipping industry.

The Getting to Zero Coalition’s and Partnering for Green Growth and the Global Goals 2030’s study underlined that Mexico could become a central player in supplying global demand for green fuel and attract investment of between 7-9 billion dollars by 2030.

The paper underscores that this Latin American country has “huge renewable energy potential” and direct access to busy maritime routes.

The ports of Manzanillo, Mexico’s largest; Cozumel, specialized in cruise ships; and Coatzacoalcos, focused on the export and import of oil and gas and their derivatives, could show how different types of facilities in Mexico could capitalize on a transition to pollution elimination. This transition would diversify current port activities and create a hub for the production and export of zero-carbon fuels. 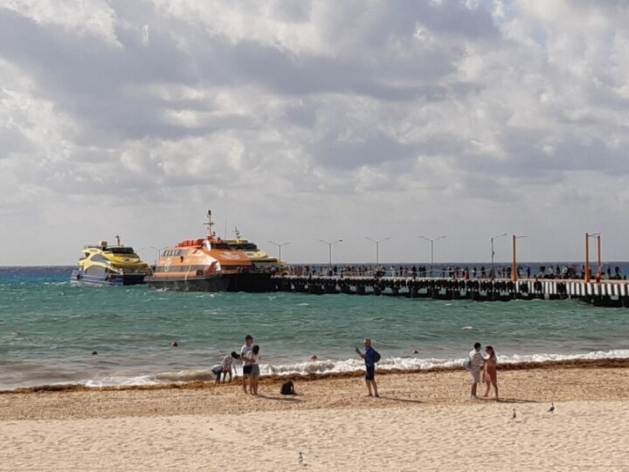 Small ferries transport passengers to spend the day in Cozumel island, the biggest in Mexico’s Caribbean, off the touristic Mayan Riviera, in the state of Quintana Roo, in the southeastern Yucatan Peninsula. Credit: Emilio Godoy/ IPS

According to Eliana Barleta, independent expert in shipping and ports, the substitution options are mainly low-sulfur fuel, liquified gas – both fossil fuels – or scrubbers’ (filters) installation on ships. These are control devices that can be used to remove some gasses from industrial exhaust streams.

“The port location, the number and type of ships that arrive to it, are all important aspects to understand the fuel choice and the infrastructure solutions. Some maritime fuel applications will be more appropriate for the quick adoption of zero-emissions new fuels. The largest ships, like bulk carriers that travel between a small number of big ports, are very suitable for early adoption, because it’s much likely the biggest ports can offer fuel supply agreements, and the same largest ships’ regular demand will support the investment,” she said to IPS.

But the ships that visit more destinations or smaller ports could have problems finding installations that could supply the new fuels, so it may take longer for them to adopt zero-carbon alternatives.

The international maritime sector considers hydrogen, its byproduct methanol and ammonia to be viable as fuels. Due to its safety and energetic potential, methanol seems to take the lead in comparison with the other two alternatives, according to two recent studies.

The problem lies in the Secretary of Energy’s refusal to promote clean fuels, said one anonymous source from the maritime sector to IPS.

The scenarios collide with the fossil fuel-supporting policies that the president Andres Manuel Lopez Obrador has applied since December 2018, when he took office, and that focus on enhancing Pemex’s operations, as the transition to cleaner energy and fuels is paused.

Pemex and the Secretary of Energy didn’t respond to a request for comment.

Alison Shaw, the British expert, foresaw one possible effect of these policies would be Mexico’s late entrance to that market.

The scholar foresaw that maritime transportation will be an important market for new green fuels and will source their supply wherever it is available, which would mean “if Mexico doesn’t produce and provide green fuels, it might enter a crowded market down the line.”

For Barleta, the shipping expert, the production of green fuels seems to be a regional opportunity. “All nations should have access to opportunities related to the decarbonization of global maritime transportation. Many countries are well situated to become competitive suppliers of zero-carbon fuels, like green ammonia and hydrogen,” she suggested.

But there are important issues to resolve. “Which are the most appropriate engines and fuels? Which is the fuel with the lowest impact (as fuels may have reduced carbon, but release other pollutants)? Which trade routes may favor decarbonization, without affecting normal commercial performance?”, she questioned.