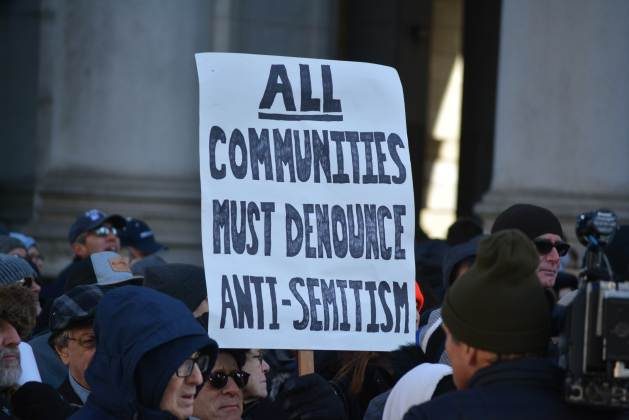 New York City, January 5, 2020: People marching from Manhattan to Brooklyn against the rise in antisemitism in New York. Antisemitic incidents reached an all-time high in the United States in 2021. Credit: Shutterstock.

PORTLAND, USA, Dec 12 2022 (IPS) - It’s time to step up, speak out and object to antisemitism. Antisemitic remarks, behavior and events cannot continue to be swept under the rug, unethically edited for political media consumption, or ignored in hopes that they will simply go away.

Events several weeks ago as well as those from the recent past that took place at the highest political levels of an advanced developed country, the United States, are indicative of the worrisome rising trend of antisemitism in many parts of the world.

On 22 November former president Trump had dinner at his home with Holocaust denier Nick Fuentes and antisemite Kanye “Ye” West. The notorious event was followed by the largely silent responses of many Republican officials and leaders, including some seeking the presidential office.

The repeated behavior and words of the former president, including his troubling response to the Charlottesville tragedy in 2017, and the tepid reactions to antisemitism by most of his supporters legitimizes the animosity expressed toward Jewish Americans.

Such behavior and remarks cannot be excused as being insignificant instances that have been blown out of proportion by the news media. Nor can they be simply deflected, diminished or explained away with references to irrelevant overseas diversions.

The former president and his various enablers have minimized, dismissed and legitimized antisemitism events in the United States, including harassment, threats, vandalism, assaults, killings and bombings. The failures to address the antisemitism facing America are inexcusable, disgraceful and dangerous.

The Jewish population of the United States is a relatively small proportion of the country. In 2022 Jewish Americans are estimated to represent slightly more than two percent of America’s population of 333 million inhabitants. In contrast, the largest religious group, Christians, is close to two-thirds of country’s population (Figure 1) 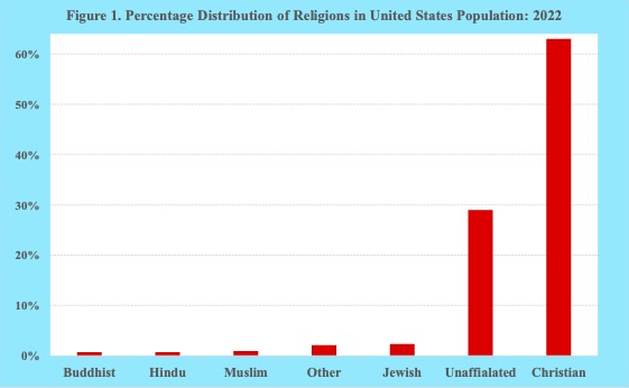 Despite Jewish Americans representing a relatively small proportion of the U.S. population, the number of reported antisemitic incidents involving assault, harassment and vandalism reached an all-time high in 2021 of 2,717, or more than seven incidents per day and nearly triple the level in 2015 (Figure 2). 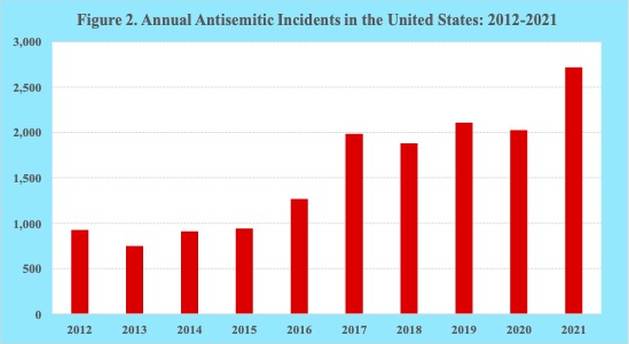 The reprehensible incidents of the recent past took place in various places across the United States, including in places of worship, community centers, schools and colleges. The motivations for the antisemitism were not always evident as they typically lacked an identifiable ideology or belief system.

One notable exception, however, is the “great replacement” theory being promoted by U.S. white supremacist groups. They believe in the conspiracy that white Christians are being intentionally replaced in the population by individuals of other races through immigration and other means.

That great replacement, they believe, is leading to white Christians no longer being the dominant majority in America. In their various demonstrations and gatherings, including the Charlottesville event in 2017, the neo-Nazi marchers often chant out such hateful antisemitic nonsense as ”Jews will not replace us”.

The former president and his various enablers have minimized, dismissed and legitimized antisemitism events in the United States, including harassment, threats, vandalism, assaults, killings and bombings. The failures to address the antisemitism facing America are inexcusable, disgraceful and dangerous

Contributing to antisemitism is the apparent self-induced amnesia among some extremist groups regarding the methodical persecution followed by the horrendous events that were committed against Europe’s Jews approximately eight decades ago. That amnesia is easily dispelled by a viewing of the illuminating Ken Burns’ documentary, “The U.S. and the Holocaust”. The Holocaust resulted in the murder of approximately six million European Jews, or roughly 63 percent of Europe’s Jewish population at the time.

Sadly, antisemitism was also evident in America’s refugee policy with respect to European Jews seeking asylum from their harrowing persecution in Nazi Germany.

Perhaps the most memorable single event reflecting its ignoble refugee policy in the past is the refusal of the U.S. government in 1939 to grant entry to about 900 Jewish refugees seeking asylum aboard the USS St. Louis that had reached Miami, Florida. The ship was forced to return to Europe, where nearly one third of the passengers were murdered in the Holocaust.

In addition, America too often has chosen to ignore its troubling antisemitic past and the many popular figures who were openly antisemitic in their public attacks on the character and patriotism of Jewish Americans. Among those ignoble figures are Henry Ford, Charles Lindbergh, Charles Coughlin, Fritz Kuhn, Coco Chanel and Louis Farrakhan.

Furthermore, besides facing educational quotas at major universities in the 1920s, including Harvard, Yale, Princeton, and Columbia, Jewish Americans experienced discrimination among the major professions and restrictions on residential housing. They were also denied membership to most clubs, camps, resorts and associations, with some hotel advertisements explicitly excluding Jewish Americans.

While that recent tragic history remains beyond doubt, many of America’s antisemitic white supremacists, including Fuentes and West, continue to deny the existence of the Holocaust, express hateful rhetoric and discriminate against Jewish Americans. They attempt to negate the historical facts of the Nazi genocide, promote the false claim that the Holocaust was invented or greatly exaggerated in order to promote the Jewish interests, and display the Nazi swastika flag and make the “Heil Hitler” gesture.

Antisemitism also fueled vocal criticism and opposition to many U.S. political leaders in the past who attempted to address the discrimination against Jewish Americans. For example, at conference of some 20,000 people in New York City in 1939, Fritz Kuhn, leader of the German American Bund, mocked President Franklin Roosevelt as “Frank D. Rosenfeld”, referred to the New Deal as the “Jew Deal”, and declared Jews to be enemies of the United States.

Some current U.S. political leaders, including some eagerly seeking to become president, continue to dismiss or ignore antisemitism. When confronted with offensive behavior and words such as the former president’s recent dining with two notorious antisemites, the initial reluctance verging on muteness of many political leaders to express outrage only contributes to antisemitism.

No matter the place, occasion or time, the U.S. electorate cannot tolerate or support those who promote, permit or condone antisemitism. In particular, U.S. elected and appointed government officials must be held accountable for their words and deeds.

An encouraging development in the U.S. was a letter recently signed by more than one hundred members of Congress to President Biden calling for a unified national strategy to monitor and combat antisemitism in the country. The letter also recognized that rising antisemitism is endangering people in Jewish communities both in the U.S. and abroad

Another encouraging development aimed at recognizing the rise of antisemitism was the 2022 Mayors Summit Against Antisemitism. More than 25 mayors from around the world and dozens of local government officials participated in the two-day Summit held in Athens, Greece, from 30 November to 1 December.

The Summit highlighted the significant problem of rising antisemitism worldwide and presented strategies and solutions to address it. Various countries around the world have reported a rise in antisemitic incidents between 2020 and 2021. In addition to the rise of incidents of approximately one-third in the United States, higher percentage rises were reported in Australia, Canada and France (Figure 3). 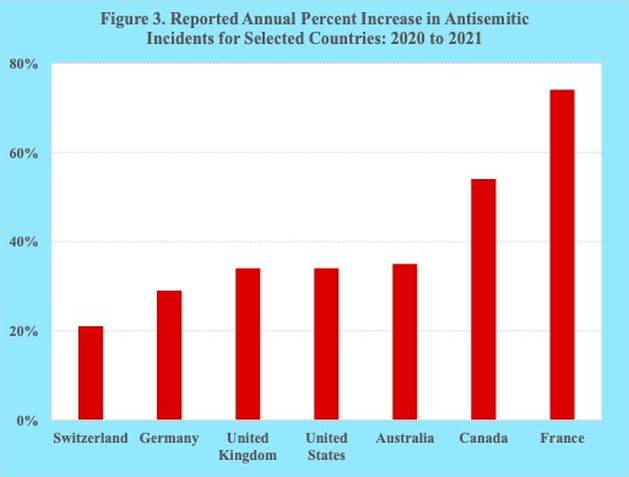 The Mayors Summit also provided a framework for exchange of ideas and cooperation between cities. The meeting also emphasized the particular role of mayors in creating inclusive societies for their cities.

Finally, recalling the tragic lessons of the recent past and troubled by today’s rising antisemitism, it’s time for everyone to speak out and denounce the hate, discrimination and violence. Tolerating antisemitism is categorically wrong and poses a serious moral threat to the world in the 21st century.