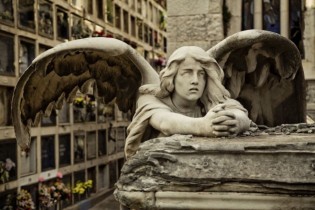 By Alexandra Di Stefano Pironti
Indonesia, the world's most populous Muslim-majority country, has found a deterrent to Islamic fundamentalists: they dress conservatively, sport short beards and Islamic caps and emulate the ways of the Prophet Muhammad.

By Alexandra Di Stefano Pironti
If the caste system existed in Indonesia the 10 elderly people who live in Jakarta's Kramat Street would surely be untouchables: for decades they and their families have been banned from jobs and access to education and, until 2005, their identity cards marked them as former political prisoners.

By Alexandra Di Stefano Pironti
Indonesia suffers from a malaise: an appalling lack of infrastructure which makes a mandarin orange that travels thousands of miles from Argentina cost nearly the same as another picked locally.

By Alexandra Di Stefano Pironti
Scattered across 17,000 islands on the Indian and Pacific oceans, the world's largest Muslim country has found its own blend of Islam: equal parts religion, secularism and contradictions.

By Alexandra Di Stefano Pironti
If in the words of Gandhi ''poverty is the worst form of violence,'' then the Indonesian government is accountable to some 120 million citizens who live on less than two dollars a day.

By Alexandra Di Stefano Pironti
Unless the rapid deforestation in one of the world’s most richly-forested countries is controlled, Indonesians may one day wonder, "where are all the flowers gone." To those lyrics by legendary U.S. singer Joan Baez they might also have to add, and where are all the tigers, elephants, orangutans, birds and ancient forest communities gone.
ADVERTISEMENT ADVERTISEMENT