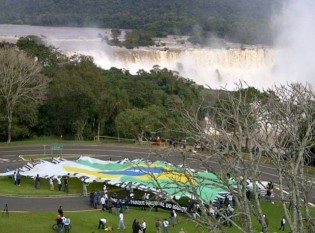 By Alice Marcondes
As part of the country’s growing emphasis on green tech research, Brazilian scientists have developed plastic solar panels that could revolutionise power generation from this clean, renewable energy source.

By Alice Marcondes
The land conflict between the Guaraní-Kaiowá indigenous people and large landowners in the southwestern Brazilian state of Mato Grosso do Sul is a powder keg ready to explode, say observers.

By Alice Marcondes
An alteration of the relationship between the Amazon rainforest and the billions of cubic metres of water transported by air from the equatorial Atlantic Ocean to the Andes Mountains could endanger the resilience of a biome that is crucial for the global climate, warns a recently concluded two-decade research project.

By Alice Marcondes
The Large-Scale Biosphere-Atmosphere Experiment in Amazonia arose from the need to understand and explain the rainforest by integrating different scientific fields.

By Alice Marcondes
The term "green jobs", coined to describe employment that contributes in some way to preserving or restoring the environment, is increasingly entering the vocabulary of companies keen to respond to the social demand for a cleaner economy.
ADVERTISEMENT ADVERTISEMENT