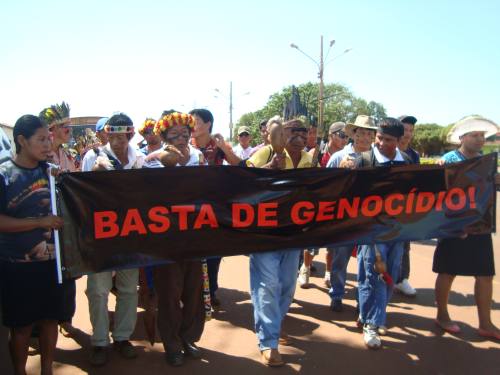 The Guaraní-Kaiowá can no longer wait for the government to protect their lands. Credit: Courtesy CIMI/Cléber Buzatto

SÃO PAULO, Sep 4 2012 (IPS) - The land conflict between the Guaraní-Kaiowá indigenous people and large landowners in the southwestern Brazilian state of Mato Grosso do Sul is a powder keg ready to explode, say observers.

Nísio Gomes, Jenivaldo Vera, Rolindo Vera, Teodoro Ricardi, Ortiz and Xurete Lopes are just a few of the names on a long list of people murdered in this state in recent years, according to the Indigenous Missionary Council (CIMI).

The statistics gathered by the Council, founded in 1972 by the Brazilian National Bishops’ Conference, reveal that 279 indigenous people have been killed since 2003 in land disputes with landowners and ranchers.

The most recent case is that of Eduardo Pires, who disappeared on Aug. 10 when armed men attacked a group of Kaiowá people in the Arroio Korá indigenous reserve, located in the municipality of Paranhos in the south of the state, near the border with Paraguay.

Arroio Korá, an area of roughly 7,000 hectares, was officially recognised as indigenous land on Dec. 21, 2009 by then president Luiz Inácio Lula da Silva. But one week later, a Federal Supreme Court ruling on an appeal filed by a landowner exempted a 184-hectare section of the land from this status.

“Even with this partial embargo, the government did not foresee that the rest would be effectively turned over to the Guaraní-Kaiowá,” said Flávio Machado, the CIMI regional coordinator in Mato Grosso do Sul. “The community, which is made up of around 600 members, currently occupies around 700 hectares. When they decided to retake control over the rest of the land, they met with a violent response,” he told Tierramérica*.

According to Eliseu, a Kaiowá leader who was present when the attack took place, on the morning of Aug. 10 some 400 members of the community set up a camp on a section of the officially recognised reserve land where a ranch is located.

A short time later, a number of armed men arrived. “I heard the gunshots and took off running. We are a people with a culture of peace, we have no weapons, but we are not going to give up fighting for our land. If we are going to die, we would rather die on our own land,” he told Tierramérica.

No one has seen Eduardo Pires since the attack. “I believe he is dead,” said Eliseu.

The Federal Police of Mato Grosso do Sul are in charge of the case. “The indigenous people say that one of them is missing. We are investigating, but we have nothing concrete. We have to be impartial,” Federal Police Superintendent Edgar Paulo Marcon commented to Tierramérica.

The following week, CIMI reports, the police removed a number of ranchers and their cattle from the area. Since then, the Kaiowá have been targeted by threats, the most explicit of which is a filmed declaration by Luis Carlos da Silva Vieira, known as Lenço Preto (“Black Kerchief”), posted on YouTube.

“We are going to organise and prepare for confrontation… They only want the land to be bothersome. We have weapons. If they want war, they’ll get war,” he states repeatedly.

In response, the Kaiowá community published a letter calling for urgent attention from the government. “Faced with a collective death threat, made publicly in the press by the landowners, we request an investigation and severe punishment of these promoters of the genocide/ethnocide of indigenous peoples.”

“Everyone knows that they have sophisticated and fearsome weapons, that they have money obtained at the expense of indigenous blood to buy more weapons and to hire gunmen… We do not have guns and, above all, we do not know how to use them,” the letter continues.

“We want to reiterate and highlight the fact that our fight for our ancestral lands is aimed solely at protecting human life and the fauna and flora of the planet Earth; it is not our intention to kill anyone.”

The state prosecutor’s office is also investigating the case and visited the area on Aug. 28. In a note published on the office’s website, the prosecutors reported that during their visit, they heard five gunshots, which they believe were meant to intimidate them.

The Guaraní-Kaiowá have always lived from subsistence agriculture, which is becoming increasingly difficult because of their lack of access to their ancestral lands, although they now have the support of the National Indigenous Foundation, a government agency.

The Kaiowá people’s lands have been occupied for decades by settlers and ranchers.

The Cerrado, a tropical savannah biome typical of Mato Grosso do Sul, has been gradually taken over by soybean plantations and cattle grazing. The land here is also highly coveted for planting sugarcane for ethanol production.

A number of Kaiowá leaders met with authorities from the Human Rights Secretariat of the Office of the Presidency in Brasilia on Aug. 24, and were subsequently included in the government’s programme for the protection of threatened persons.

But for CIMI, this measure is insufficient.

“Many of the indigenous people murdered were in this programme. They were put on the list, but this doesn’t represent any kind of effective protection,” said Machado. “All they do is send people to verify what has already happened.”

Nevertheless, the Kaiowá view this protection as a positive step. “At least (the authorities) know who is threatening us, and if anything happens to us they will know who did it,” said Eliseu.

The decision to occupy the Arroio Korá territory was adopted by the community’s leaders in a large assembly known as “Aty Guasú”.

Despite the latest attacks, the community is no longer willing to put up with the government’s delays. They are determined to take back control over all of the lands officially recognised as theirs.

“The delays are killing the people anyway,” another indigenous leader, Tonico, told Tierramérica. “We are going to occupy all of our lands, even knowing that there is no security, that we are going to die. The people have decided.”

As for the death threats made by landowners, Tonico commented, “They are saying publicly that they are going to do what they are already doing. Here, in Mato Grosso, the human rights of indigenous people don’t exist. Indians are not people,” he said.

The decision to occupy the land was reinforced by the anger sparked by a decree issued on Jul. 17 by the Attorney General’s Office, which serves as the state’s legal defense. According to the decree, indigenous lands can be occupied by hydroelectric projects, communications and transportation lines, and military facilities without the need for prior consultation with the people living there.

“This is a regression,” said Tonico.