Stories written by Ansel Herz
Ansel Herz is an independent multimedia journalist. A Seattle native and survivor of the January 2010 earthquake in Haiti, he has reported from Haiti for nearly two years for IPS, Reuters AlertNet and Free Speech Radio News and has been interviewed by CNN, the BBC, the Canadian Broadcasting Corporation, Democracy Now! and other outlets. In 2011 he was key writer and researcher in a series of articles, published by the Nation magazine and Haiti Liberte, based on WikiLeaks cables related to Haiti. Ansel is a graduate of the University of Texas at Austin School of Journalism. | Web 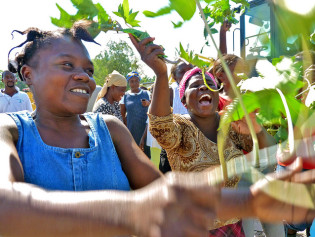 By Ansel Herz
Workers in Haiti's apparel manufacturing sector charge that factory owners are repressing attempts to organise workers in the capital, after the dismissals of six of seven leading members of a new union within just two weeks of its formation.

By Ansel Herz
Seventeen-year-old Rose Mina Joseph says she is nine months pregnant. Her belly is swollen and she moves slowly, placing each step, as she walks around her family's dusty yard.

By Ansel Herz
Tensions are running high in Haiti as dueling campaigns for the presidency enter overdrive in their final days, and Jean- Bertrand Aristide, a popular former president, returns from a seven-year exile in South Africa.

By Ansel Herz
When diplomat Ricardo Seitenfus spoke out in interviews last month condemning the international community, he was dismissed from his post within days by the Organisation of American States.

By Ansel Herz
Dieula Rosemond is tired. A lone swaying palm tree yields a little shade over her plastic chair. Her hands are folded in the lap of her white dress. Little girls play with a ragged, pale-faced doll behind her.

By Ansel Herz
Furious demonstrations continued across Haiti on Wednesday following the Nov. 28 highly contested election in which thousands found themselves unable to vote.

By Ansel Herz
"People are going to take the body to MINUSTAH to show them what they did," Jean-Luc Surfin told IPS by phone as riots erupted against Haiti's U.N. peacekeeping force on Monday in the northern city of Cap-Haitien.

By Ansel Herz
Standing on a raised piece of pavement across from the makeshift home where she has lived for the past 10 months, Violet Nicola threw up her hands.

By Ansel Herz
The man arrived from Arcahaie, near St. Marc in central Haiti where a cholera outbreak exploded last week, initially overwhelming the local medical grid. It was an hour's journey to a hospital in Lafiteau, near the capital, where he died on Sunday.

By Ansel Herz
Days after an outbreak of cholera began in Haiti's rural Artibonite region, killing at least 200 people, there are now five confirmed cases of cholera in the busy capital city.

By Ansel Herz
Some 1.3 million people have lived in makeshift camps throughout Port-au-Prince since the January earthquake devastated the city. Living conditions are "appalling", according a recent report by Refugees International.

By Ansel Herz
Thousands of victims of the January earthquake in Haiti are at risk of being displaced for a second time as private landowners throughout the nation's capital city grow impatient with makeshift tent camps on their properties.

By Ansel Herz
United Nations peacekeeping troops responded to a rock-throwing demonstration by university students Monday evening with a barrage of tear gas and rubber bullets in the area around Haiti's National Palace, sending masses of displaced Haitians running out of tent camps into the streets, according to witnesses.

By Ansel Herz
For decades, the Saint Louis de Gonzague school has groomed some of Haiti's most elite political players. Francois Duvalier, the iron-fisted dictator who ruled Haiti for 14 years, sent his son to the school. About 1,500 children of Haiti's wealthiest class attend each year.

HAITI: Looking More and More Like a War Zone

By Ansel Herz
On an empty road in Cite Militaire, an industrial zone across from the slums of Cite Soleil, a group of women are gathered around a single white sack of U.S. rice. The rice was handed out Monday morning at a food distribution by the Christian relief group World Vision.

HAITI: The Camp That Vanished

By Ansel Herz
Perched near the top of a steep hill, the fractured pink walls of Villa Manrese overlook the rest of the capital city. Both ends of the three-story compound have collapsed, spilling into mounds of rubble. The first floor was pulverised into a layer of dust. There are still bodies inside.

By Ansel Herz
A cacophony of murmurs and cries echoed through the neighbourhoods of Haiti's capital city Monday night as a violent aftershock shook people awake. Ten minutes later, another tremor rocked the ground, this time more smoothly back and forth.

By Ansel Herz
Two gray 23-million-dollar hovercrafts sitting in the middle of a sandy tropical beach look like they are from another world. A pair of 15-foot-wide propeller fans sticks out from the back of each behemoth.

HAITI: Sending Hope over the Airwaves

By Ansel Herz
Throughout the earthquake's aftermath, the voices of many Port-Au-Prince radio stations have been loud and clear.

By Ansel Herz
Millions of dollars in aid are pouring into Haiti. Another head of state visits each day. The misery in Port-Au-Prince dominates the news nearly a week after the 7.0 earthquake struck the heart of this island country.
Next Page »
ADVERTISEMENT ADVERTISEMENT