PORT-AU-PRINCE, Jun 9 2010 (IPS) - Thousands of victims of the January earthquake in Haiti are at risk of being displaced for a second time as private landowners throughout the nation’s capital city grow impatient with makeshift tent camps on their properties. 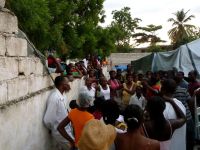 Residents gather together after the owner of the Palais de L'Art centre locked the gate, forcing them to climb over the partially collapsed wall. Credit: Ansel Herz/IPS

At a camp in the dirt parking lot of central Port-au- Prince’s Palais de L’Art events centre, fear and frustration are mounting as weeks have stretched into months with no word from authorities on when sustainable housing will be available.

The centre’s owner locked a metal gate shut Monday, forcing at least 150 camp-dwellers to climb over a partially- collapsed five-foot-high wall to access their shelters and belongings.

“If we had another place to go, we wouldn’t stay here suffering like this,” said Reynold Louis-Jean, who heads the camp organising committee. “We have elders, handicapped people, people who lost limbs. Now we have to carry them for them to get in and out.”

“He’s trying to force us out now. We can’t accept this,” he said as families carried buckets of water over the wall. The Red Cross stopped delivering water to the camp.

Joseph Saint-Fort, the owner of the club, is vowing to repair the collapsed wall, cutting off access to the camp entirely. A stack of concrete blocks sits in his yard at the ready.

In letters and meetings for over two months, the Haitian government and officials from non-governmental organisations told Saint-Fort to wait until land can be found to relocate the camp.

His patience has run out. He warned for weeks that if nobody paid him for the use of the land or moved out, he would shut the gate.

“No one has proposed anything to me. They’re going to have to force me to just let those people stay in the compound like this,” Saint-Fort said. “I have contracts with a lot of people from before the earthquake. It’s not that I’m greedy for money, it’s just this is the place I was using to make a living!”

The Haitian government and U.N. agreed in April to a temporary moratorium on forced evictions of camps. They say no landowner should push people from land unless there is an alternative space that meets minimum humanitarian standards.

“We made the decision together. But applying it was another story,” Interior Minister Paul Antoine Ben-Aimie told IPS in an interview. “We haven’t communicated anything to the population so far.”

It is not clear if a moratorium is still in effect. It doesn’t seem to matter because nothing is enforced.

“We’re very much in a gray zone in terms of what’s actually being enforced and what isn’t,” said Ben Majekodunmi, deputy chief for the human rights section of Haiti’s U.N. peacekeeping force, known as MINUSTAH.

He said peacekeepers cannot enforce a moratorium on evictions and that local Haitian authorities appear unaware of the measure.

“This is a massive problem that cannot be addressed on a case-by-case basis. We have to have a policy,” Majekodunmi told IPS.

An April letter from the Haitian government to Saint-Fort, the owner of Palais de L’Art, said land would be made available in northern Port-au-Prince to move the camp. He says the Ministry of Interior has not contacted him since then.

On the campus of a private Methodist school in Petionville, 200 families are camped around the basketball court. Women who work as street vendors say the gated entrance to the camp is often closed when they need to leave early in the morning.

The relief organisation World Vision distributed tents but “faced problems” installing latrines and supplying water to the camp, according to one aid worker.

“World Vision is creating disorder by providing them with help,” Pastor Thelesier Elysee told IPS over the phone.

“We have too many people occupying the space, they’re creating insecurity. We need them to be moved out,” he said before abruptly hanging up. Other pastors who run the school refused to comment.

Haiti’s capital is often called “teeming” and “overcrowded.” But Tabarre, the north section of the city, is dotted with grassy plots of vacant land. There is an airy feel to the flat landscape, with stretches of open space alongside busy roads. Further north, there are acres of open terrain.

In bustling downtown Port-au-Prince, the government and U.N. are forging ahead with plans to relocate thousands from camps around the crumbling national palace to Fort National, one of the hardest-hit urban zones of the city.

The Canadian Red Cross was “about to begin building transitional shelters on a less than watertight legal basis and had to stop the project at the last minute” in Fort National, according to an internal document.

Transitional shelters are tiny homes that offer more stability and protection from extreme weather than tarps and tents.

At Palais de L’Art, the displaced families already have to contend with heavy afternoon rains on top of the pressure to leave from the landowner. Months-old tarps and tents are leaking and standing water seeps in from below.

Michel Odinor, standing shirtless in a typical afternoon downpour, told IPS, “It’s miserable. We need them to give us another place, but there’s nowhere else we can go.”