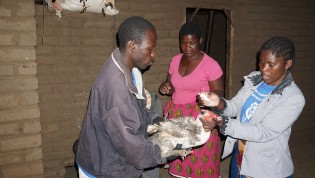 ENVIRONMENT-MALAWI: Elephants Out of Harm’s Way

By Charles Mkoka
A South African capture team has almost completed the translocation of a herd of elephants from the Phirilongwe forest reserve located in a communal management area in southern Malawi.
ADVERTISEMENT ADVERTISEMENT