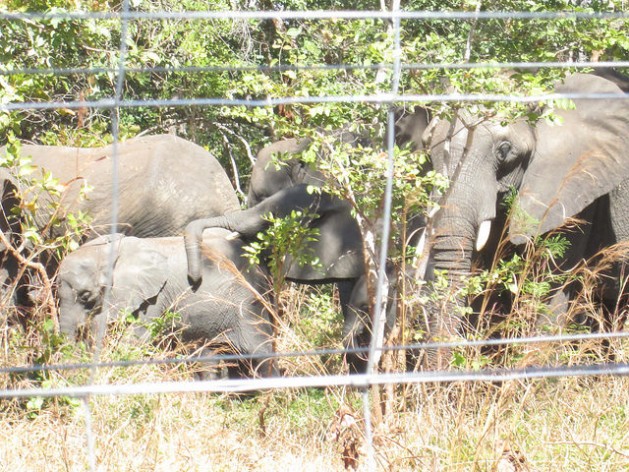 Elephants in a solar-powered holding pen in Malawi, which is carrying out a major translocation between conservation parks. Credit: Charles Mkoka/IPS

LILONGWE, Jul 20 2016 (IPS) - One of the world’s largest and most significant elephant translocations kicked off earlier this month within Liwonde National Park in southern Malawi.

Patricio Ndadzela, Malawi country director of African Parks, a non-profit conservation group based in South Africa that is leading the relocation, told IPS that so far, 10 bulls and 144 family groups of elephants have been successfully captured from the park and transported 300 kilometers by truck to their new home in the Nkhotakota Wildlife Reserve in central Malawi.

A few decades ago, around 1,500 elephants roamed Malawi’s biggest wildlife reserve, but now only a few herds totaling about 100 remain. The park is poised to be revitalised and serve as a critical elephant sanctuary for populations nationwide.

Nkhotakota Wildlife Reserve covers 1,800 square kms of Miombo woodlands and afro-montane forest along Chipata Mountain on the border with Ntchisi district. The relocation, which began on July 3, involves tranquilising the elephants by dart from a helicopter and loading them by crane onto trucks for the journey to Nkhotakota.

"It's a story of hope and survival. It is a story of possibility." -- Peter Fearnhead, CEO of African Parks

The World Wildlife Federation notes that elephants remain under severe threat from ivory poaching, habitat loss, and human-wildlife conflict. Since 1979, African elephants have lost over half of their natural range. Less than 20 percent of African elephant habitat is currently under formal protection.

Local engagement for a balanced ecosystem

But Malawi is setting an example for the rest of the continent in how to protect elephants with the full consent and assistance of local communities. Before embarking on this major translocation exercise, African Parks engaged peripheral communities after taking over the reserve in July last year from government. Zonal area committees were established at the traditional authority level. These are chiefs of jurisdiction in the four districts that border the reserve. The districts are Nkhota Kota, Mzimba, Ntchisi and Kasungu.

“We have had a good working partnership with African Parks, together with the local people. They are managing the reserve for 25 years.  So far a number of activities have been done in consultations with the local people,” says Malijani Kachombo, the Traditional Authority Mphonde in Nkhota Kota district.

“They then brought the issue of restocking endangered species so that we have a more balanced ecosystem. This promise that they made has now been fulfilled today. The translocation of 500 elephants is no more a promise but reality.”

The animals will be well secured now as a new fence is already under construction and communities have been given ownership of the reserve, said the chief.

As part of their integration into the reserve, a special landing site for the animals was chosen that provided for basic needs. According to Samuel Kamoto, African Parks Manager for Nkhotakota Wildlife Reserve, the site was identified after confirming that it had adequate water, shelter and food for the animals.

More importantly, they considered the proximity of the landing site’s accessibility to the road, since the heavy trucks carrying the animals need to align the doors with the entrance of the holding pen.

“Elephants started arriving last night and we let them inside the holding pen so that they can rest and regroup as social beings and families. This enables the animals to settle down first other than just letting them out, which confuses them,” Kamoto told IPS.

Senior Lecturer in Ecology and Wildlife at Lilongwe University of Agriculture and Natural Resources, John Kazembe, said that the move was a good option considering the fact that Liwonde National Park was relatively small. Overcrowding of elephant populations in Liwonde had led to the animals devouring large areas of vegetation and coming into conflict with local people.

“Elephant herds should be moved into the reserve at intervals so that the ecosystem is not overwhelmed by a one-off relocation,” Kazembe said.

Peter Fearnhead, Chief Executive Officer of African Parks, said “Most stories we hear about elephants in Africa are doom and gloom. This translocation of 500 elephants, which is a pivotal moment for Malawi who is emerging as a leader in African elephant conservation, is a story of hope and survival. It is a story of possibility.”

It’s hoped that this rich reserve, coupled with a good working partnership with the local populace, will enable the animals to resettle quickly.

The giant seven-week translocation is costing 1.6 million dollars, and has been made possible with support from the Dutch Postcode Lottery, the Wyss Foundation, the Wildcat Foundation, Donna and Marvin Schwartz, Dioraphte and the People’s Post Code Lottery.