WASHINGTON, Sep 15 2012 (IPS) - With 2011 marking the deadliest year for poaching-related elephant deaths in Africa since an international ivory ban went into effect in 1989, a new investigative report released here Friday points to the ongoing impact of religious custom as well as the newfound economic might of China. 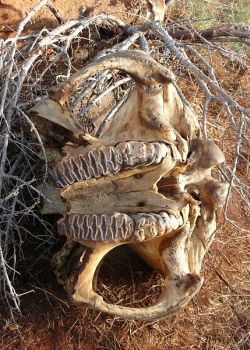 The situation also underscores the questionable efficacy of the international regime charged with overseeing the global ivory trade, the Convention on International Trade in Endangered Species of Wild Fauna and Flora (CITES), a treaty signed in 1973 that covers 176 countries. Early next year, CITES is scheduled to consider re-opening the regulated trade in ivory.

“The parties to CITES must recognise that in the current climate of poor enforcement, lack of resources, failure of political will and corruption, there is no likelihood that any form of regulated trade is workable,” Mary Rice, the executive director of the London-based Environmental Investigation Agency (EIA) and the head of its elephants campaign, told IPS by e-mail.

“CITES remains, for the moment, the main mechanism through which illegal trade in ivory can be addressed … However, unless CITES applies its authority (it has teeth if it chooses to use them) and adopts a more transparent and open approach, it is open to abuse and gaming for sovereign political and commercial agendas and interests.”

Over its first 20 years, CITES was credited with a dramatic reduction in the ivory trade and a rebounding of elephant populations, especially in Africa. Over the course of the 1980s, some 600,000 elephants are estimated to have been killed in the continent.

For now, the successes of CITES appear to be in the past.

According to CITES own estimates, some 25,000 African elephants were killed by poachers in 2011, though others have suggested that this figure could be far higher. In January this year, in Cameroon, hundreds of elephants were killed by scores of poachers on horseback bearing high-powered weapons – one of the worst such single incidents since the 1989 ban went into effect.

According to Bryan Christy, an investigative reporter who spent the last three years looking into the issue and writes about the Cameroon event, elephant poaching is currently at its worst level in a decade, and the CITES ban “is under constant attack”.

In a story published Friday, Christy discusses how pressure from several southern African countries eventually led CITES officials to allow certain countries to sell off stockpiled ivory in two “one-off” sales – first to Japan in 1999 and, second, and more controversially, to China in 2008.

While the idea was to allow these sales to flood black markets with cheaper, legally sold ivory, that is not what happened. Not only was there little evidence to show that the first sale had any significant impact on either poaching or smuggling levels, but following the 2008 sale the Chinese government proceeded to increase the price of domestic ivory substantially and then to monopolise its trade.

The effect, Christy reports, has been catastrophic for anti-poaching efforts worldwide, with the Chinese market drawing in increasing amounts of poached ivory.

“The Chinese government is the real puppet master here,” Christy told IPS, noting that Beijing has recently funded a new fleet of technical schools training a new generation of ivory carvers. “Now that China has the buying power to go into the ivory trade, the country with the biggest, most dynamically growing population is saying, ‘We want more; feed us ivory.’”

Meanwhile, Christy points to a central structural problem with CITES’s ability to regulate such a situation: as currently set up, the only metric that the Convention uses to asses ivory-related crimes is the number and size of seizures of illegal ivory.

“When they do that, they’re asking the same government officials who are often part of criminal syndicates to report on this,” he says.

“So, if China reports too many big seizures, it makes government officials look like criminals. Instead, they report lots of little ones, and no one gets hurt – but that doesn’t work. The CITES system relies on the very people who are parts of these criminal networks.”

The new Chinese influence in the illicit ivory trade is taking place in parallel to a far older trend, though one that has not gained as much notoriety – the ongoing centrality of ivory in several religious traditions.

“This story began with a rumour that ivory was being smuggled from Africa to the Philippines – I had never heard of that. The Philippines is not considered a major ivory-consuming or -trafficking country,” Christy says.

“But in the Philippines, I found that the exclusive use for ivory was religious purposes. In fact, in both of the widely accepted dominant countries in this trade – Thailand and China – there is a strong religious underpinning.”

While Christy says the public understanding of the environmental implications of engaging in the ivory trade remains relatively undeveloped in countries such as the Philippines and China (Thailand is a bit different), the hierarchical and moral nature of religious communities offers a potent opportunity to turn the tide.

“All the core principles of Catholicism and Buddhism can be applied to fix this problem pretty quickly,” he says. “But these religions have clear leaders, and these leaders can lead. The key to solving these problems is to find and motivate local civil society – local Filipinos, local Thais, domestic Chinese.”

For advocates, the need for such involvement could now be more significant than anytime in recent decades. At the next CITES summit, in Bangkok in March, member states are slated to discuss proposals, tabled at a lead-up meeting this summer, that would seek to “systematise” the trade of ivory.

Not only are several African countries planning on requesting permission to sell their ivory stocks, but for the first time several Southeast Asian countries say they will do so as well, including Thailand and the Philippines. For many, the question is whether these countries are actually committed to the ban, as they say they are, or whether they’re just waiting for the ban to erode.

“It is imperative that the E.U. takes a strong position to oppose further sales and trade. With 27 member states, the E.U. vote is a deal-breaker,” the EIA’s Rice says.

“The U.S. also plays a pivotal role in how the issue gets dealt with in the international arena – many parties follow their lead. Currently, the sales of ivory are being held up as a ‘model’ for how other wildlife products could be traded.”

Yet Bryan Christy notes that Western countries, including the United States and those in the European Union, are inherently more disinterested than are countries that stand to gain financially from any renewed ivory trade.

“A growing number of African countries want to sell their ivory,” Christy says, “and, unfortunately, it’s often the interested parties that make the difference.”