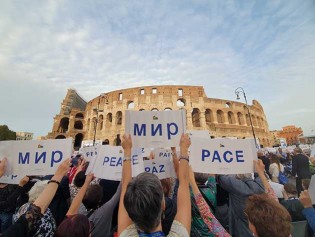 Before It Kills, War Whispers

By Elena L. Pasquini
A small yellow puppet hangs from the butt of a gun. The eyes and shorts of the figure that children love are just traces of faded black. "It's a detail, but it tells what the war is."

Between Horror and Hope in the Villages of Ituri

By Elena L. Pasquini
“We have buried twenty-eight people. I have seen them with my own eyes. We also found three bodies in the fields and buried them too. I can show them to you. It’s not far from here. We buried them there.” The man points to the hills. He doesn’t want to show his face or say his name, but he agrees that his voice can be recorded, so that his words don’t get lost. The camera can’t shoot him; it can only look at the tall grass or at the forest towards the countryside where it is no longer possible to cultivate food. The man talks while music from Lengabo’s catholic church marks the time of truce and hope.

By Elena L. Pasquini
He moves aside the curtain, thin as gauze, and then bends over. The darkness dazzles for a few seconds when one enters the house—actually, a den made of earth where air and light filter through the narrow entrance. Jean de Dieu Amani Paye holds her tiny baby, wrapped in an elegant fabric, in his arms. He was a teacher of French and Latin and had a small business. He also cultivated the land: cassava, corn, sorghum, and beans.

By Elena L. Pasquini
Distant and blurred, as if it belongs to the past, the war in Afghanistan has never been so fierce and forgotten. On the 7th of October, the country entered the twentieth year since the United States announced the first airstrikes against the Taliban, adding a new chapter to the endless bleeding of this corner of Asia, where more than four decades without peace have left entire generations hopeless.

By Elena L. Pasquini
The COVID-19 outbreak has brought the world back to the essentials: health and food. Fighting the spread of the virus while ensuring access to food has proven to be a challenge in many countries. The loss of income is reducing families’ ability to feed themselves; movement restrictions and lack of labour for planting and harvesting are a strain on the chain that brings food from field to fork. Hundreds of millions of the most vulnerable people are on the brink of acute hunger, and food insecurity is likely to increase globally.

By Elena L. Pasquini
For millions of children around the world, the COVID-19 outbreak means not getting the most important, if not the only, meal of the day.

By Elena L. Pasquini
Behind the Tiburtina Station, in the East of Rome, with just a small covered area protecting from the inclemency of the weather, sleeping close to each other is the only way to stay warm. A boy of Ivorian origin is alone, far from everyone, in the centre of the sidewalk, exposed to a freezing wind.

By Elena L. Pasquini
For thousands of years, farmers have used genetic diversity to cope with weather variability and changing climate conditions. They have stored, planted, selected and improved seeds to continue producing food in a dynamic environment.

By Elena L. Pasquini
‘Diaspora is the biggest development community that exists in the world’, according to Pedro De Vasconcelos, manager of IFAD‘s Financial Facility for Remittances. However, its potential is still largely untapped.

By Elena L. Pasquini
Abdulwahab Tahhan is a journalist and a refugee. From his exile in London, he documents the war that is devastating his homeland of Syria, monitoring airstrikes and assessing civilian casualties for the non-profit Airwars.
ADVERTISEMENT ADVERTISEMENT