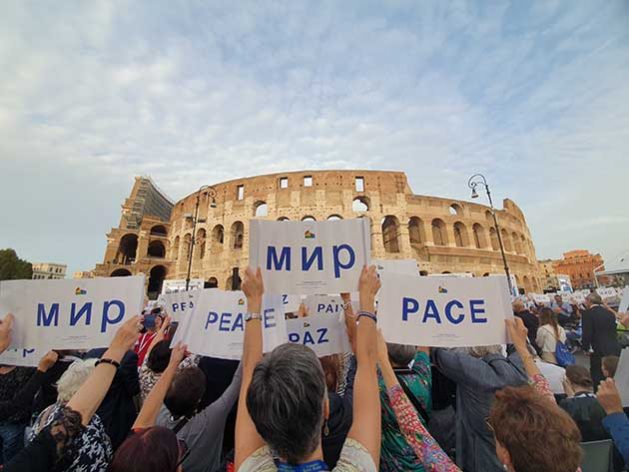 Colosseum at the Prayer with the Pope and the representatives of the workd’s religions. Credit: Elena L. Pasquini

ROME, Nov 7 2022 (IPS) - Arms are raised, stretched out towards the sky, holding white cards with the word “peace” written in different languages. A girl, a refugee from Syria, reads the Rome’s “Appeal for peace”: “With firm conviction, we say: no more war! Let’s stop all conflicts […] Let dialogue be resumed to nullify the threat of nuclear weapons.” Pope Francis singed it in front of the people gathered at the Colosseum, holding the word “peace” in their hands, as representatives of the world’s religions did as well. Shortly before, members of those different religions gathered for prayer to invoke peace in their different traditions—a prayer that is “a cry” inside the ancient amphitheater.

“This year our prayer has become a heartfelt plea, because today peace has been gravely violated, assaulted and trampled upon, and this in Europe, on the very continent that in the last century endured the horrors of the two world wars – and we are experiencing a third. Sadly, since then, wars have continued to cause bloodshed and to impoverish the earth. Yet the situation that we are presently experiencing is particularly dramatic…”, the Pontiff warned. “We are not neutral, but allied for peace, and for that reason we invoke the ius pacis as the right of all to settle conflicts without violence,” he added.

The same “raised hands” marched for peace on Saturday in Rome when around 100.000 people from different organizations called for a ceasefire in Ukraine and in all the other armed conflicts.

The prayer with the Pope was the last act of a three-day interreligious dialogue, held at the end of October in the Italian capital and introduced by the presidents of the French and Italian republics, Emmanuel Macron and Sergio Mattarella. The first convocation was in Assisi, in 1986, willed by John Paul II. Since then, it has been promoted by the Community of Sant’Egidio, a Christian community whose fundamentals are prayer, serving the poor and marginalized, and peace. For the role it has played in mediating conflicts, it has been named the “UN of Trastevere” after the city center neighborhood where it is headquartered and where the peace agreement in Mozambique was signed thirty years ago. 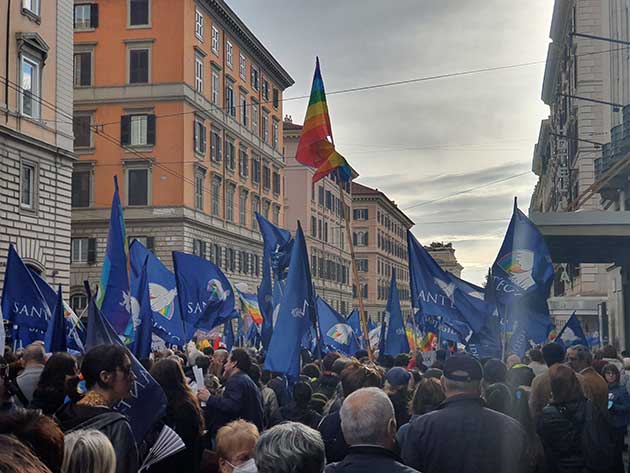 Flags at the rally for peace in Rome on Saturday. Credit: Elena L. Pasquini

Leaders and believers of various religions and secular humanists have woven relationships, prayed, and confronted each other. They hand over a map drawn by many voices, too many to account for in the space of an article. “The cry for peace” meeting is also an invitation to “do”. It offers a map of concrete steps, things done and to do, best practices, imagination, with a key word: dialogue. “And dialogue does not make all reasons equal at all, it does not avoid the question of responsibility and never mistakes the aggressor with the attacked. Indeed, precisely because it knows them well, it can look for ways to stop the geometric and implacable logic of war, which is [escalation] if other solution are not found”, explained Cardinal Matteo Maria Zuppi, president of the Italian Episcopal Conference.

World scenarios are made even more worrying by the risk of nuclear escalation in the Ukrainian war—a war on the doorstep of that part of Europe that has cultivated peace inside, but that has let armed conflict flourish elsewhere. “The lack of this commitment [outside Europe] let the war reach its borders, indeed—in some ways—penetrate within it, even in its deepest fibers,” said Agostino Giovagnoli, historian of the Community of Sant’Egidio. “Today war threatens Europe also because it threatens the alternative imagination which is at the basis of the European architecture. War, in fact, is banal: it does not consist only of a fight on the ground but it is also a form of ‘single thought,’” he added.

This “single thought” has changed the European attitude, according to Nico Piro, special correspondent and war journalist of the RAI, the Italian national public broadcasting company. “After the Russian invasion of Ukraine, in Europe as in Italy, a political monobloc in favor of [fighting] has emerged from right to left. It is standing out what I named ‘PUB’ [Pensiero Unico Bellicista], a Bellicist-Single-Thought … [It] projects a stigma on anyone who asks for peace, on anyone who has a doubt or raises a criticism of the idea that fueling the war serves to end it […],” he said. “What has peace become then? No longer a tool to stop and prevent armed conflicts but a by-product of war.”

Yet, among the many voices that met in Rome, one word resounds, whispered and then said: kairos. The “critical moment” is now. The war in Ukraine is the “wake-up call” that must be grasped, that cannot be missed, widening our view from Europe to those never-ending conflicts all over the world. Among the many lessons from Sant’Egidio’s dialogue, two should be learned to grasp that kairos: working together daily to build peace in every single life and returning to working together as a community of states, relaunching the multilateral message. 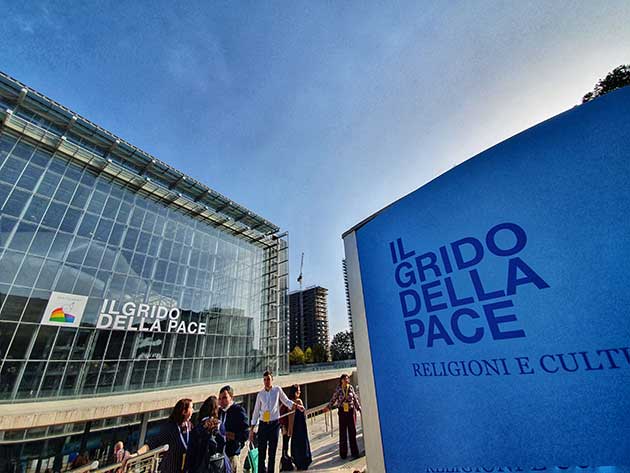 “Whoever saves a single life saves the whole world,” the Talmud says. Or “an entire world” as Riccardo di Segni, chief rabbi of Rome, suggested, since every human being has the potential to create “a new, unique world.” Thus, peace means recognizing the value of each single life, in sharp contrast to the logic of war, in which “the life of the enemy is no longer life. It’s not the same. [That’s] war, [which] dehumanizes everyone a priori in the name of life,” according to Mario Marazziti, member of the Sant’Egidio community. This also happens here, in Europe, where those fleeing wars, hunger, and persecution are allowed to die at sea, “dehumanized,” reduced to numbers.

Gégoire Ahongbonon has a chain in his hand. He puts it around his neck and shows the heavy metal rings to the audience. There was a man chained with that same metal, naked, tied to a tree, like many others. His only fault was a psychiatric disorder. Ahongbonon saved over 70,000 people, “sentenced to death” because they were ill. He is the founder of the Association Saint Camille de Lellis that works in five countries of sub-Saharan Africa. He asked a tough question: “Are we different from them? Are we different from this person, we? […] What did they do wrong? They were born like all of us.”

Saving those lives is already making peace, eradicating the roots of violence and discrimination and planting those of peace, as Mjid Noorjehan Adbul is doing in Mozambique. She is the clinical head of the network of centers for the prevention of mother-to-child transmission of HIV, opened by Sant’Egidio’s DREAM program, a program of excellence operating in 10 countries. She, a Muslim, is surprised when people ask her why she works with Catholics: “We all have the same goal,” she replies. For twenty years, she has been working to ensure health care for those who cannot afford it. In fact, she was the first one to use antiretroviral therapy in her country. “There is no peace without care,” she said, quoting Pope Francis – “care” for eradicating “the culture of waste, of indifference, of confrontation.” Ex-patients, like those “women who have experienced the stigma firsthand and put themselves at the service of other ill people,” are now helping to build a new health culture – she explained.

Saving lives, restoring hope, choosing the paths of dialogue, and designing an architecture of peaceful coexistence should also be the aim of politics. The multilateral message, legacy of the twentieth century’s “unitary tensions,” however, needs new impetus.

“Those who work for peace are realistic, not naive!” Cardinal Zuppi said. Realistic as it was Pope Bendetto XV that called for an end to the “useless slaughter” that was the First World War. He had a very clear vision of the need for a multilateral architecture, a league among nations that could guarantee lasting peace. A realistic way to design the future still seems to be the one built on a permanent, global agorà that creates space for dialogue. “No multilateralism, no survival,” argued Jeffery Sachs, a speaker at one of the fourteen forums that shaped the meeting agenda. However, the United Nations – the organization founded on the ruins of the Second World War to make the “no more war” reality – risks to be “delegitimized”. That’s something to be avoided, according to Zuppi. “… We are aware that the United Nations is a community of nations. Its every failure represents a weakening of international determination and makes us all losers,” warned Shayk Muhammad bin Abdul Karim al Issa, general secretary of the Muslim World League.

Today, however, multilateralism needs to adapt: “We need a multilateralism that is just and inclusive, with equitable representation and voice for developing countries”, said Martha Ama Akyaa Pobee, Undersecretary for Africa in the Department of Political and Peacebuilding Affaris and Peace operations. “At heart of [UN’s effort to adapt] is the need to engage earlier and proactively, and not to wait react to a crisis after it has escalated”, she added. A multilateralism that does not act only after a conflict breaks out, but that is able to prevent it and to build peace also by supporting “the resilience of local communities”.

The Kairos, the right moment, is now even if there is war in Ukraine and elsewhere because peace must be built even when war is raging. “How to live now?” wonder those who have seen the destruction and the ferocity of an armed conflict, like Olga Makar, who took care of Sant’Egidio school of peace in Ukraine. “This is the question every Ukrainian asks him or herself. In those first days of war, when I felt my life was broken, I found an answer: our houses are destroyed, our cities are in ruins, but our love, our solidarity, our ability to help others, our dreams cannot be destroyed”.

Words that echo in those of Pope Francis: “Let us not be infected by the perverse rationale of war; let us not fall into the trap of hatred for the enemy. Let us once more put peace at the heart of our vision for the future, as the primary goal of our personal, social and political activity at every level. Let us defuse conflicts by the weapon of dialogue”.