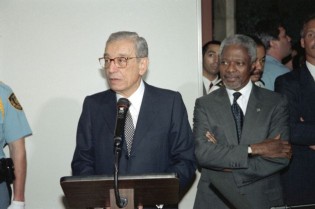 By Federico Mayor Zaragoza
“If we don’t do everything possible to democratize globalization, globalization will pervert national democracies”, said the former Secretary-General of the United Nations, as President of the “International Panel on Democracy and Development” set up by UNESCO and chaired by the man who had worked so hard, at a global scale, in favour of giving voice to the peoples -as required in the first sentence of the Charter of the United Nations- to allow constant participation from citizenship as should be the rule in a genuine democracy.

By Federico Mayor Zaragoza
Now that the war in Iraq is considered ‘over’, another major goal of Israel has come into view: attacking Iran on the pretext that it may possibly be working on a nuclear weapon - though Pakistan, China, and India definitely already have them.

By Federico Mayor Zaragoza
Danielle Mitterrand, one of the world's most prominent and extraordinary women, has died after a fearless lifelong fight for the poor and marginalised.

CAN THE WORLD BE FIXED?

By Federico Mayor Zaragoza
The world can be fixed:

TECHNOLOGY AND THE NEW DEMOCRACY

By Federico Mayor Zaragoza
The time has come to take a stand, to say calmly and firmly that humanity cannot continue to subject itself to the interminable throes of a system that has resulted in the current grave and multi-faceted (social, financial, food, environmental, political, democratic, ethical) crisis.

TOWARDS AN ABOLITION OF THE DEATH PENALTY

By Federico Mayor Zaragoza
The Universal Declaration of Human Rights adopted by the General Assembly of the UN in December 1948 recognises the right of all people to life (Article 3) and categorically states: "No one shall be subjected to torture or to cruel, inhuman, or degrading treatment or punishment."(Article 5)

A CULTURE OF PEACE – THE TIME HAS COME

By Federico Mayor Zaragoza
The time has come. The culture of war, the economy of war, and the hegemony of the "globalisers" have been a catastrophic failure and the cause of incalculable levels of suffering, hunger, extreme poverty, and social affliction. A "new beginning" is needed urgently here at the dawn of a new century and a new millennium.

IF WE WANT PEACE, WE ALL HAVE TO BUILD IT

By Federico Mayor Zaragoza
\"If you want peace, prepare for war.\" This perverse maxim, a golden goose for the arms dealers, has been used from the beginning of time by the powerful, who had at their disposal the lives of their vassals. So it was, up until the turbulent but hopeful dawn of the new century and millennium, but no longer, because global awareness has grown and the understanding of reality has deepened, writes Federico Mayor Zaragoza, President of the Foundation for a Culture of Peace and ex-Director-General of UNESCO. There is no wartime economy without war, the preparation for war, or pretexts for arming to the teeth. The only force capable of opposing the colossal inertia of this machine is \"the people\", citizen power, a civil society that does not allow itself to be fooled, that only supports leaders who boldly decide to put in action the universal principles so lucidly expressed in the UN Charter\'s Declaration of Human Rights. Politics must be based on generally-accepted ethical principles. Incorporating certain religious values is insufficient and dangerous, as is basing political action on strictly economic criteria, which is evident today. It is thus extremely important that the excuse of a \"clash of civilisations\" be definitively barred from political logic and replaced with citizen involvement and general acceptance of responsibility by all members of society. If we unite our hands and our voices, we can correct the current disastrous course.
ADVERTISEMENT ADVERTISEMENT