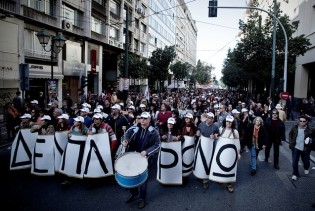 VICTORY OF HOLLANDE A CAUSE FOR HOPE IN EUROPE

By Mario Soares
I have known French president-elect Francois Hollande since the days of his predecessor and my friend Francois Mitterand. A man of broad vision, he is what France needs to pull itself out of the current crisis and put in place a policy for economic and social recovery. But his victory at the run-off election on May 6 goes far beyond this: it is a resounding confirmation of numerous signs that Europe has recognised the failure of neoliberal ideology and is changing course.

EUROPE ON THE BRINK

By Mario Soares
It is hard to see how the European Union and the euro can find their way out of the imbroglio their leaders have led themselves, and all Europeanists, into.

HAS THE EUROPEAN UNION LOST ITS WAY ?

By Mario Soares
The two main political-ideological families that contributed most to the unity of Europe were without question social democracy (labour, socialists, and social-democrats) and Christian democracy. These two strains are, and have long been, in decline, the former since the collapse of the communist universe (1989-1990) and their submission to neoliberal "colonisation"; the latter since the changes that occurred after Vatican II in the 1970s.

RESPONSIBILITY IN THE AGE OF CATASTROPHE

By Mario Soares
Even Pangloss from Voltaire's Candide, with his incurable optimism, would find today's world hard going. Nature and humanity have let loose their respective demons and no one can rein them in. In many areas, the earth has battered us repeatedly with cyclones, tidal waves, earthquakes, floods, and most recently the eruption of a volcano in Iceland that shut down airports across northern and central Europe. It is a sad and unprecedented spectacle.

THE EU MUST ACT NOW ON GLOBAL CRISIS

By IPS Correspondents and Mario Soares
I have been a sincere admirer of yours since I started following your writing and speaking about your plans during the presidential campaign. I admire your humanism, your culture, your valour, and your style. Unlike you, I am not a believer. I am agnostic and have a certain amount of experience in public life. However, I said to many friends that your victory constituted an authentic miracle for the United States and for the world, however little I believe in miracles.

By Mario Soares
Latin America is undergoing a process of accelerated transformation. Considered the "backyard of the United States" for much of the last century, it suffered a string of coups d'etat and dictatorships, many piloted by neoliberal economists from the so-called "Chicago School". It is natural that the region would want to forget this past and move in another direction.

By Mario Soares
The news was like a ray of sunlight that lit the entire world: "Obama Awarded Nobel Peace Prize!" It was unexpected, for many premature, and set off a wide range of reactions in every corner of the planet.

THE RESCUE OF KARL MARX

By Mario Soares
In Europe summer is usually the time when publishers release forgotten books, biographies, and travel writing, and major magazines put out special editions on a past subject of current interest.

HONDURAS: ANOTHER CHALLENGE FOR OBAMA

By Mario Soares
A few months were enough for Obama to peacefully revolutionise the United States and the world. He radically changed the policies of Washington, domestic and international, with visible consequences at the global level despite a financial and economic crisis that, notwithstanding certain signs of improvement, is still far from turning around.

By Mario Soares, Mario de Queiroz, and Miren Gutierrez
Global house prices are diving further, unemployment in the 16 countries using the euro increased in April to its highest level in almost ten years, and Eurozone Gross Domestic Product is expected to shrink by 1.9 percent during 2009...

By Mario Soares
The first good news regarding the economic crisis is arriving from the United States, about certain improvements in the banking sector as well (Goldman Sachs, Citigroup, Morgan Chase, etc). For now, they are but faint signs. But Barack Obama continues to fight on all fronts, with rigour and courage.

By Mario Soares
The economic crisis engulfing the world is getting worse day by day and has spread to every continent. It is a truly global crisis the solution to which is clear to no one. During the years of hope in the "glorious decades" following World War II, the communists never tired of proclaiming the impending general crisis of capitalism, which would be fatal for the system, according to Marxist analysts. Although there were small crises, none was comparable to the depression of 1929, which seems the ultimate measure of failure.

By Ignacio Ramonet and Mario Soares
In office only since January 20, US President Barack Obama has jumped into action so quickly he has not given adversaries or observers the time to organise criticism or attacks. Meanwhile Europeans, and in particular their political leaders, do not seem to have grasped the "Copernican revolution" that is underway in the US and appear stunned and incapable of reacting to the new developments that are taking place each day in Washington.

By Mario Soares
In office only since January 20, US President Barack Obama has jumped into action so quickly he has not given adversaries or observers the time to organise criticism or attacks. Meanwhile Europeans, and in particular their political leaders, do not seem to have grasped the "Copernican revolution" that is underway in the US and appear stunned and incapable of reacting to the new developments that are taking place each day in Washington.

By Mario Soares
There are remarkable differences between the effects of today\'s massive financial crisis on the US, the epicentre of the crisis, and on the European Union, writes Mario Soares, ex-President and ex-Primer Minister of Portugal. In this analysis, Soares writes that after the victory of Barack Obama and the Democratic party, the US has become \"the land where anything could happen\", while the Old Continent remains paralysed and seemingly adrift. It is worrying that many European leaders seem not to have even grasped the scale of the challenges the world currently faces and the necessity of working together and joining forces to meet them. It seems improbable that the Treaty of Lisbon will be ratified by the 27 member states, just as predicted months ago. This is a shame, because the strategy embodied by the treaty, approved in March 2000, sets out a social and environmental model and affirms, therefore, that it is possible to make harmonise progressive social policies, workers\' rights, and strict environmental regulation with economic competitiveness, financial rigour, and scientific and technological innovation.

By Mario Soares and Mario de Queiroz
Mario Soares, two times president and three times prime minister of Portugal, says he is sorry that the European Union has not yet understood the importance of strengthening relations with Latin America.

THE ROLE OF THE INTELLECTUAL UNDER TOTALITARIAN REGIMES

By Mario Soares
The role of the writer in politics has been a subject of intense debate since French novelist Emile Zola published in 1898 \"J\'accuse\", his indictment of the French army\'s wrongful conviction of Alfred Dreyfus for treason. The most recent chapter was related to the life and work of the renowned Russian writer Alexander Solzhenitsyn, who died on August 4, writes Mario Soares, ex-President and ex-Prime Minister of Portugal. Between World War I and II numerous French as well as German, British, American, Latin American, and other writers had a considerable effect on the political opinions of the public. One of the most influential was Romain Rolland, author of \"Jean Christophe\" and \"L\'Ame Enchantee\", a French pacifist and communist sympathiser who was read throughout Europe. In 1974 Solzhenitsyn was expelled from Russia and became the dissident most loathed by the world\'s communist parties. I remember clearly the polemic that erupted in Portugal after the 1974 Carnation Revolution freed us from the dictatorship and how Portuguese communists attacked us socialdemocrats for defending Solzhenitsyn in keeping with our creed.
Next Page »
ADVERTISEMENT ADVERTISEMENT