In this column, Mário Soares, former president and prime minister of Portugal, writes that the economic policies being enforced in the so-called “periphery” of the eurozone threaten to destablise the entire Union. Fuelled by a neoliberal ideology that puts usurious markets before citizens, the austerity regime could result in a regression of civilization. 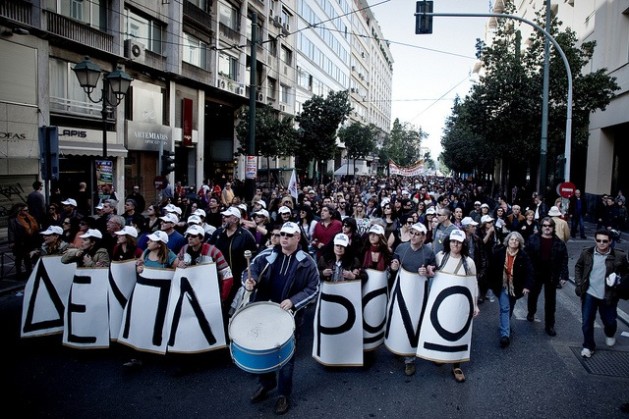 LISBON, May 27 2013 (IPS) - The economic crisis began in the United States under the administration of then-President George W. Bush, following the collapse of the Lehman Brothers Bank. It came as a result of unregulated globalisation and a neoliberal ideology that places usurious markets, offshore bank accounts, and money for the sake of money, above state power. It is an ideology that ignores citizens, even as they starve.

At the time – between 2007 and 2009 – I wrote some books: “A Changing World”, “In Praise of Politics”, “Fighting for a Better World” and “Inside the Hurricane”, addressing in all of them my concerns about the risk of a neoliberal contagion of the euro and the European Union (EU) itself. U.S. President Ronald Reagan and British Prime Minister Margaret Thatcher championed these disastrous neoliberal politics – which were later continued by the pseudo-labourite Tony Blair – whose negative consequences are now evident to all.

In view of the profound links between Europe and the United States, the spread of U.S. neoliberalism to the EU and particularly to the eurozone was inevitable. When the EU crisis began, chancellor Angela Merkel already headed Germany. In spite of being a Lutheran, Merkel was also a former militant of the East German Communist Party. After the fall of the Berlin Wall she stood in opposition to the German reunification to which European states contributed.

As is well known, the first victim of the crisis was Greece, the cradle of our civilization and thus a country that deserved better treatment. It got the opposite.

The German chancellor, a longtime ally of ultra-conservative liberals, heeded market demands. The situation in Greece, where German banks occupied a privileged position, deteriorated until the country was able to pay the exorbitant sum demanded by the Troika, a body comprised of Greece’s major creditors: the European Central Bank (ECB), the International Monetary Fund (IMF) and the European Commission (EC).

In the meantime, in the absence of financial assistance, the so-called peripheral states of the eurozone plunged into crisis. Ireland, Portugal, Spain, Italy (Europe’s third largest economy) and Cyprus were followed by the recent and surprising Dutch collapse. France is the latest addition to the list.

It all boils down to the criminal policy of austerity imposed by Germany, the IMF, the European Commission under the presidency of Jose Manuel Durão Barroso and, with greater discretion, Mario Draghi’s European Central Bank.

It has become more than evident that austerity favours merely usurious markets and those behind them. Austerity obliterates states and their respective populations, not only in the so-called “peripheral”, southern states, as was recklessly claimed. Take a look at the Netherlands, France and Germany. The crisis was bound to hit Germany as many economists, including Nobel Prize-winners Joseph Stiglitz and Paul Krugman, had predicted.

Currently Germany is struggling due to a policy of austerity that has shrunk many of its markets in the European states, which account for 50 percent of its exports. If austerity is maintained, Germany itself will enter a recession.

European public opinion has understood both the necessity and urgency of a break not only with current policy, but also with a political class that has proven incompetent.

The current ruling parties within the EU are mostly ultra-conservative and incapable of grasping the critical situation. Truth be told, the parties that built the EU – the socialists, the social democrats, the Labourites, and the Christian democrats, are no longer in power.

The sole exceptions are France and now Italy, where President Giorgio Napolitano was re-elected in spite of his age, and where we find a new prime minister in the figure of Enrico Letta. Both Letta and French President Francois Hollande have openly declared their opposition to austerity and their intention to restore the role of states in controlling markets, and not the other way around.

Hence, the citizens of all European countries have vociferously expressed their opposition to Troikas, the markets, pseudo-politicians and those governments committed to austerity.

It should be noted that the welfare state (a product of the postwar era), democracy as we conceived it, as well as the rule of law are all being jeopardised, creating the need for a profound and immediate political shift.

We face a straightforward dilemma: either we fight against unemployment, widespread poverty, recession and in defense of the welfare state in its broader sense, or, if we wait too long, the EU will fall into the abyss.

And not only would it be tragic for the U.S. to lose its only faithful ally, but many nations of the world would suffer: China, Russia, Japan, Brazil, India, Mexico and so on.

I am hopeful this won’t be the case. The world surely does not wish the disappearance of the European Union, the most original political project of all times and the one that brought so many benefits to its peoples. Its collapse could open the door to a global conflict. Its demise would represent an unacceptable regression of civilization, one that would set us more than a century back. May common sense and courage prevail.