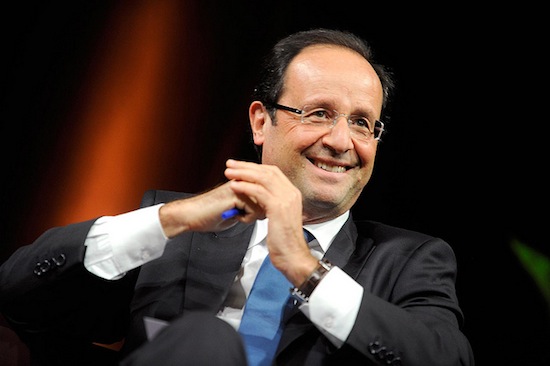 Francois Hollande, a frontrunner in the upcoming French presidential election, claims his "real political adversary is the world of finance." Credit: Jean-Marc Ayrault/CC-BY-2.0

BERLIN, Mar 20 2012 (IPS) - Practically all European Social Democratic and Socialist parties are supporting the French presidential candidate François Hollande in the upcoming elections, in the hope that his likely triumph against incumbent president Nicolas Sarkozy will create enough continental momentum to put an end to the present Conservative-inspired social and economic austerity policies.

According to the most recent polls, Hollande is likely to win the French presidential elections scheduled for April and May, with some polls released on Mar. 19 indicating that he could overcome Sarkozy with some 55 percent of the votes in the second round slated for May 5.

On Mar. 17, leaders of practically every European Social Democratic and Socialist party – all of which attach fundamental importance to the French presidential elections to define the middle term European economic and social future – gathered in Paris to participate in a rally to support Hollande.

Such united backing for the frontrunner who claims that his “true adversary is finance” comes at a time when the question of social justice in Europe has become more pressing than ever. Youth unemployment has reached record summits in debt-ridden Spain and Greece, and in Portugal the death rate of elderly is reaching historic heights.

As Stefan Ulrich, correspondent of the German daily newspaper Die Sueddeutsche Zeitung in France, commented on the weekend Leftist summit in Paris, “Europe has forgotten its own children. That’s why the Left believes its hour has come.”

Additionally, all three Mediterranean countries and Italy are trapped in a severe economic recession, aggravated by the austerity programmes imposed by the European Union and the international financial institutions.

This fiscal and growth conundrum makes the possibility that these countries can improve their budget situations and economic capacities while simultaneously reducing their debts highly unlikely.

The macroeconomic landscape also reflects the rising income inequality across the continent. The present salaries of top business executives remain astronomically high when compared to the income of an average employee in the EU, while taxes paid by large private companies are at an all time low, especially for banks and investment funds.

Against this backdrop, Hollande’s programme of higher taxes for the wealthy, tighter regulation for private financial institutions, and more public spending on youth employment and education strategies looks increasingly like a Social Democratic ‘new deal’ for Europe.

“The French presidential election is the point of inflexion in European politics,” said the former Italian leftist Prime Minister Massimo D’Alema during the weekend rally to support Hollande.

“First we (Leftist parties) will take France, then we will take Europe,” Johannes Swoboda, Austrian leader of the Social Democratic group at the European Parliament, predicted at the rally.

European Leftist support for Hollande is a reaction to the European Conservative electoral support for Sarkozy, and aims at changing the austerity programmes, in particular the so called fiscal pact, imposed upon Mediterranean governments allegedly to “master” their sovereign debt crises.

This Conservative electoral backing for Sarkozy was best expressed by German chancellor Angela Merkel, who in a recent television interview in Paris said, “I support (Sarkozy) in whatever he does.”

Hollande is the one European Socialist leader who has expressed open and vehement opposition to such programmes. During his electoral campaign, Hollande pledged to renegotiate the European fiscal pact, which foresees a public debt limit for the whole of Europe, but no increase in public revenues, in the form of tax reforms.

In a programmatic speech last January, Hollande went as far as to say that his “real political adversary is the world of finance … which over the past 20 years has taken control of our economy, our society, and our lives.”

In that speech, Hollande denounced conventional neoliberal attempts to revive the economy, which has been in shambles since the outbreak of the global financial crisis in 2007.

He stressed that the only tangible result of various global and European summits, other than aggravating the abject living conditions of the poor, was that “private banks, first bailed out by the state, are now biting the hand that once nourished them.”

Besides new rules for banks and investment funds, Hollande has also promised a wealth tax of 75 percent, to pay for new public spending in youth employment and education, and a reversal of the rise of the pension age, a Sarkozy-sponsored reform.

The Social Democratic opposition parties in Italy and Germany would indeed benefit from Hollande’s electoral victory. In both countries, general elections are scheduled for 2013. However, both parties must face strong incumbent candidates.

In Germany, conservative Chancellor Merkel still enjoys a great deal of popularity after six years in office, despite numerous setbacks in her political and economic programmes or backlash from her choices in political personnel.

At the same time, the German SPD has not yet fully recovered from the dramatic loss of favour it suffered during its past reign (1998-2005), during which it adopted radical cuts in welfare and pension programmes, and a vast deregulation of the labour market, measures that provoked a widening of income disparities, leading to what social scientists call “the oligarchisation of German society.”

D’Alema, who is likely to lead the Leftist opposition coalition in Italy in the 2013 elections, must also confront the incumbent Prime Minister Mario Monti, who, despite the austerity programmes imposed since last fall, enjoys a good deal of popular support.

A triumph for Hollande in France next May, coupled with victory for the SPD in Germany (most likely in coalition with the Green party) and success for the Leftist coalition in Italy next year, would mean that the most important countries in the European monetary union would cease to be ruled by Conservatives.

The three countries could then join forces with other Leftist governments in Belgium, Denmark, Austria, Slovenia, and Slovakia to form a kind of balanced, united front against the conservative governments in the rest of Europe, in particular in Britain, Finland, Ireland, the Netherlands, Poland, Portugal, Spain and Sweden.