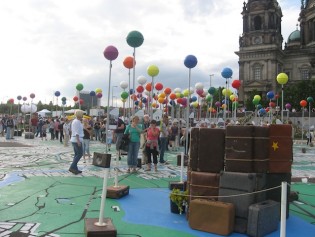 By Francesca Dziadek
With a persistent undercurrent of discrimination against foreigners, ‘Gastarbeiter’ (guest workers) and citizens of colour, despite the fact that 20 percent of its population - roughly 16 million residents - are from an immigrant background, Germany is faced with the urgent task of rethinking its ambivalence towards diversity.

By Julio Godoy
Practically all European Social Democratic and Socialist parties are supporting the French presidential candidate François Hollande in the upcoming elections, in the hope that his likely triumph against incumbent president Nicolas Sarkozy will create enough continental momentum to put an end to the present Conservative-inspired social and economic austerity policies.

By Pavol Stracansky
Just days after a hotel was firebombed in a suspected racist attack, experts and activists have warned of neo-Nazi groups turning to ‘terrorist’ campaigns as they become increasingly influenced by far-right movements in other countries.

By Vesna Peric Zimonjic
Serbia has reached its historic goal of becoming a European Union (EU) member candidate after being a pariah state for years. But analysts warn that the undisputed political success may not bring immediate results.

By Claudia Ciobanu
For more than a week, thousands have been demonstrating in cities across Romania. Participants from all walks of life bring to the fore the broadest array of demands in what looks like a celebratory discovery of street protest. The main call is against lack of transparency and accountability in decision-making.

By Zoltán Dujisin
Protests in Hungary and Romania are the first signs of anti-systemic mobilisation in the Eastern half of the continent. While protests in both countries indicate dissatisfaction with their governments’ authoritarian turn, their origins differ, as does the European Union’s reaction to them.

By Pavol Stracansky
A school in Slovakia has defended its decision to segregate Roma children from other students after a court ruled the practice breached equal rights laws.

By Zoltán Dujisin
The massive overhaul of Hungary’s political system by the conservative Fidesz party is raising fears the country’s days as a liberal democracy may be numbered. With opposition parties powerless, it is civil society that has awakened to support a more participatory democracy.

By Vesna Peric Zimonjic
Serbia saw the first rehabilitation of a member of its royal family earlier this month, in a move by the supreme court described by historians as "deeply moral" and necessary - for generations who remember the Karadjordjevics as well as those who have learned about them from the history books.
ADVERTISEMENT ADVERTISEMENT