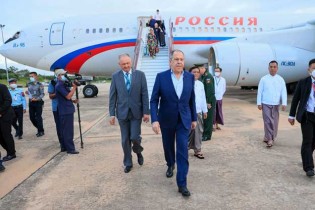 By Jan Servaes
"The illegal military junta provides further evidence to the international community of its disregard for human rights as it prepares to hang pro-democracy activists," said Thomas Andrews and Morris Tidball-Binz, UN special rapporteurs in Myanmar for human rights and extrajudicial arbitrary executions, respectively on June 10, 2022.

By Jan Servaes
Before the February 1 coup, China was among the top international partners of the now-in-opposition National League for Democracy (NLD). From 2015 to early 2020, when China closed its borders due to COVID-19, NLD leader Aung San Suu Kyi made five trips to China and met the Chinese President Xi Jinping five times.

By Jan Servaes
Could the rise of the youth-led 'Ratsadon' movement lead to changes in Thai politics? Prime Minister General Prayuth Chan-ocha now faces an ongoing threat as the movement continues to mobilize many, especially young people, against the government. They have broken traditional taboos by opening new conversations about the monarchy and shaping public discourse to question many conservative views in Thai society.
ADVERTISEMENT ADVERTISEMENT