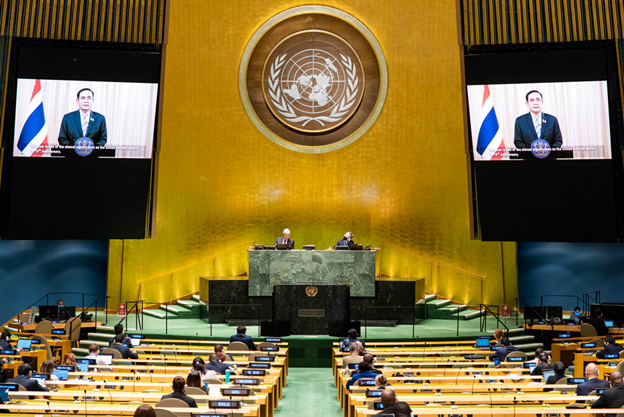 BRUSSELS, Aug 11 2021 (IPS) - Could the rise of the youth-led ‘Ratsadon’ movement lead to changes in Thai politics?

Prime Minister General Prayuth Chan-ocha now faces an ongoing threat as the movement continues to mobilize many, especially young people, against the government. They have broken traditional taboos by opening new conversations about the monarchy and shaping public discourse to question many conservative views in Thai society.

Their main demands are: First, they want the former coup leader and now elected prime minister, Prayuth Chan-ocha, to resign. Second, they want to change the constitution, which was written by a commission appointed by the military during Prayuth’s military rule. Third, they want to reform the monarchy, and Article 112 of the Criminal Code, known as the lese majeste act.

According to Tamara Loos, professor of history and Thai studies at Cornell University, the Ratsadon movement is not just about the monarchy, but rather “a massive cultural shift” away from total submission to the established powers.

Young people question those in positions of power, from state authorities to parents and teachers. Outsiders see parallels with the ‘roaring sixties’ in the US and Western Europe.

Supporters of the Ratsadon group believe that Thailand can change for the better. They want to shake up the social fabric to decentralize power, reduce inequality and create more opportunities for ordinary Thais.

Ratsadon, which means ‘common people’ in the Thai language, is run by young Thais – in their twenties and thirties or even younger. Their logo is the raised three fingers from the Hunger Games. The same symbol used by the opposition in Hong Kong and Myanmar.

Months of street protests and calls for reform were seen as an act of defiance against the old establishment in Thailand. They followed an important political development when the progressive Future Forward Party was disbanded in February 2020.

Founded in 2018, Future Forward became popular among young voters. It took a critical stance against the military, monopolies and the current 2017 constitution, which was written during Prayuth’s military rule.

The Future Forward party came third in the 2019 general election with around 6.3 million votes before being dissolved by the Constitutional Court on February 21, 2020 for violating “election laws” that are still up for debate. Even the US embassy in Bangkok condemned the ban.

Thus, the establishment seems largely intact, thanks to the thick layer of nepotism and corruption ingrained in the Thai system. Prime Minister Prayuth is still in power as opposition calls for the former junta leader to resign went unanswered.

Meanwhile, attempts to amend the constitution as a result of the 2014 coup have also floundered, stalling in a parliament packed with Prayuth’s allies.

The ongoing protests resulted in lawsuits. Nearly 700 protesters have been charged with crimes ranging from causing unrest to sedition. Among them, a record 103 have been accused of the infamous Lese Majesty Law.

The International Federation for Human Rights (FIDH) and Thai Lawyers for Human Rights (TLHR) call for the Thai authorities to end legal prosecution against individuals exercising their right to freedom of expression and to amend article 112 to bring it into line with Thailand’s human rights obligations under the 1966 International Treaty on Civil and Political Rights.

But public pressure on the government is mounting. The recent spate of COVID-19 outbreaks has sparked a new wave of anti-government protests that have seen older political groups return, including some of Prayuth’s former allies.

Only 6% of Thailand’s population of more than 70 million has been fully vaccinated and most of the country including Bangkok is under lockdown with a night-time curfew. Gatherings of more than five people are currently banned.

The Nikkei COVID-19 Recovery Index ranks more than 120 countries and regions on infection management, vaccine rollouts and social mobility at the end of each month. Thailand is listed last in the current listing.

The Prayuth government is feeling the hot breath of popular anger and is trying to find a way out. If we are to believe a leaked government document, Prime Minister Prayuth Chan-ocha and Health Minister Anutin Charnvirakul want to be exempted from any future prosecution for the fiasco of the COVID-19 campaigns.

On the other hand, others are called in, such as “Captain” Thamanat, the rapidly rising heroin-convicted Secretary-General of the ruling military Palang Pracharath Party who seems to be protected by powerful interests.

What does this mean for the anti-government movement? How will all the groups reconcile their differences and how much of a threat do they pose to the government now?

Political commentator Voranai Vanijaka recounts the differences: Royalists are afraid to support the Move Forward Party and the Progressive Movement to remove General Prayuth, because then the monarchy will also come under attack.

People also don’t want to support Pheu Thai because of the shadow of Thaksin Shinawatra and the history of the red shirts. The Re-solution Movement is trying to put constitutional reform and the junta-appointed 250 senators back at the center of attention.

“Continue to criticize and condemn the Prayuth regime, it is not only our democratic right, but it is also a democratic duty of the conscientious citizen. But understand that as long as we, the common people, cannot overcome our hatred of each other and cross the barrier, as long as we cannot find a unifying actor/factor, General Prayuth will continue to giggle for at least four, if not more years.”

However, initially peaceful and playful demonstrations have become increasingly grim and violent.

“Thais are tired of seeing the same general (and his cronies) in power amidst continuing economic malaise,” observes Paul Chambers, a political analyst and lecturer at Thailand’s Naresuan University.

“With the voice of the people increasingly silenced in parliament, more people will take to the streets to make their voices heard,” Chambers said. “Repressing them can only be temporary,” he added. “Thai elites will eventually have to make concessions to reformers. The only question is when.”